It's time to spring clean your water butt diverters!

One of my Clients recently had a water butt installed, at my recommendation - well, for heaven's sake, rain water is free, doesn't contain chemicals, is the same temperature as the garden, and is free. They already had a rainwater diverter in place, but it wasn't connected to anything - what a waste! Not to mention that every time it rained, the water dribbled out of the diverter and down the outside of the drainpipe, causing moss and staining on the pipe.

So I suggested that it would be simple to re-fit a new water butt, and indeed it was.

Everyone with any sort of garden should collect rainwater, and to prove that I practice what I preach, I actually have five water butts on my small house - two in series on the front downpipe, one collecting water from a small outhouse, and, my pride and joy, two in series at the end of the back garden.

Why are they my pride and joy? Because there isn't room to have them up by the house: between the window and the patio doors is a small stretch of wall, but as it gets the afternoon sun, I decided it was more useful for supporting fruit trees, so there was no room for a water butt, not even a skinny little space-saver one.

I therefore spent some time setting  up a cunning system to take the water from the house downpipe and run it to the far end of the garden, where there was room for the butts. I wrote about it in the latter half of this article, and now I have detached water butts, invisibly connected to the house, and I am very proud of them!

Anyway, getting back to business, the water butt duly arrived and was fitted in place, and the following week, after some light rain, I went to use the water, only to discover that it was virtually empty.

"Hmm," I thought, "perhaps the tap was left open, so any water than went into it has just passed straight through."

I tested this theory by bringing a canfull of water from the outside tap on the other side of the house, and sure enough, the tap had been left in the open position.

I closed it, laughing sardonically and rolling my eyes at the general level of competence among handymen who don't think to test their installations.

Two weeks later, after heavy rain, I tried it again, expecting it to be full to the brim. But alas, no, it only had a couple of inches of water in it.

I looked again at the connections, it all seemed to be fine: none of the joints were obviously leaking, and beside, with all the rain we'd had the previous week, even if the joints leaked, there would still be a butt-full of water.

So I disconnected it, and took out the diverter from the downpipe. 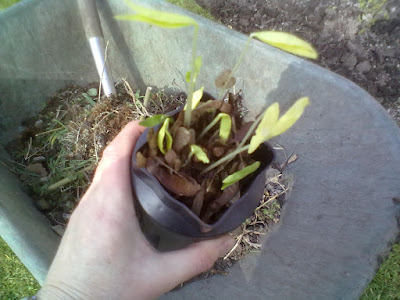 The diverter was stuffed full with debris which had washed down from the roof over the years, and even had a good crop of pale young sycamore trees growing in it!!

All I had to do was scrape out the mini-woodland, turn it upside down and bang it on the wheelbarrow a few times, shaking out all the earth and muck. A quick rinse under the watering can and it was good to go - I slotted it back in place, re-connected the pipe to the water butt, and lo! and behold, the following week, the water butt was nearly full with lovely free water!

So, the moral of this story is that downpipes with diverters are prone to blocking up, and every couple of years it is worth disconnecting them and clearing them out.

Posted by Rachel the Gardener at 08:49