The day the fruit tree fell off the wall.

I know, that does sound a bit extreme, and it's not quite the full story...  ("Blogger Guilty Of Exaggerated Headline")

... so this is what actually happened.  I arrived at work one day last summer to find the client in a distressed state, because one of the fruit trees had, quite literally, fallen off the wall.

I rushed round to the fruit wall to assess the damage, and this is what I found: 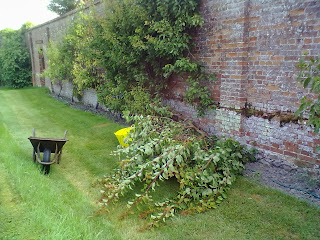 The Apricot had, indeed, fallen off the wall!

The attachment points were ancient, to be fair - remaining rusty slivers of nails originally banged in to a not-very-substantial red brick wall, probably forty or fifty years ago.

I suppose we can't blame them for eventually giving up the ghost, but it was particularly annoying for me, as I had spent the last five years getting these wall-trained fruit trees back into good condition.

And now there was one of them, lying on the grass!

Everything that had been snapped, scraped, or badly bent had to go. Then, a handful of hammer-in vine eyes and ten minutes up a ladder, to make some new fixing points.

Next job, take what was left of the tree and carefully lever it upright, then tie it in to the wall. A close inspection of the main trunk showed that it had managed to bow over without pulling itself out of the ground, but I stamped around the base just in case.

Finally, a careful going-over with the secateurs to remove any small damaged parts: there is no point leaving them, they won't flourish and broken bark is just an invitation for disease and pests to crawl inside and set up shop, so it's better to be firm, and remove them all.

After than, all I had to do was give it a good watering - and I'll be keeping a close eye on it for the next few months - and clear up the mess. 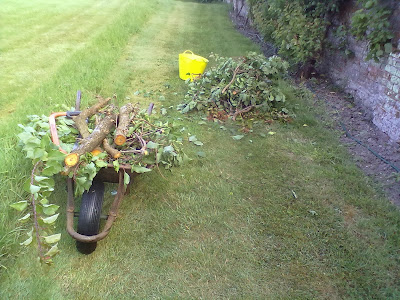 When the excitement was all over, this is what had to be sacrificed: three barrow-loads of limbs and branches, off to the bonfire heap.

Once they were out of the way, a quick go-round with the rake removed the last of the evidence, and there! you'd never know that we started the day with a disaster.
Posted by Rachel the Gardener at 07:46