Pronounciation - what's in a name?

The other day, I was weeding up some Cinquefoil: you know, that really annoying, stringy, weed that sends out long reddish runners which then root wherever they touch: 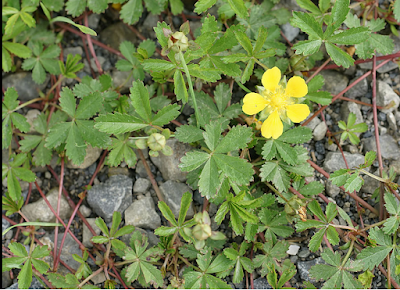 Now, most people don't like weeding but I enjoy it for two reasons: it's so nice to see the resulting cleared area once you're done, and it gives my mind plenty of time to wander, and ponder.

And on this particular day, I was wondering about the name. Cinquefoil.

I've never, ever said it out loud. Have you? Should it be "sink-foil", I wondered, muttering it under my breath - but it didn't quite feel right. (The Client's cat was giving me that "why are you talking to yourself instead of me?" look, but I'm used to that.)

Like most of us, I know enough French to recognise that cinque is "five", which fits in neatly with the five-lobed leaves of the plant. So if it's a French name, it should be pronounced Sank-foil, as in the Cinque Ports ("Sank ports"). Not Sink-foil, but Sank-foil.

But then, if we agree that the cinque part is not sink but sank, then what about the foil? It shouldn't be "foy-ull", should it - how do you pronounce foil in French? Something more like "fwaa", perhaps? Sink-foil, or sank-fwaa?

I'm still not sure!