How to COMPLETELY stop your "real" Christmas tree dropping pine needles all over your carpet. Honest!

I'm guessing that few people are going to be reading this blog over the holiday season, so I thought I'd slip in something to catch all the googlers who are not the least bit interested in gardening, and who won't ever come here again, so I can afford to insult them, just a little bit.

OK, you know how you should never take a medical person to see a medical film, or a laywer to see a film with legal stuff in it, or a policeman to see any film with any sort of police procedure in it, or - for that matter - a Consultant Forensic Horticulturalist (that's me) to see anything with forensic procedures in it....

...because they will either sit there, gamely gritting their teeth all the way through, or they will spend the whole time saying things like "But that's not true!" or "But that doesn't work like that!" or "But that would never happen like that in real life".

And I'm sure you're familiar with the best way to wind up a bird-watcher, ie to start talking about seagulls. Apparently there is no such thing as a simple "seagull", they are types of gull. But frankly, when I hear something mewing above me at the seaside, I don't care if it's a, for example, Black-headed gull, or a Lesser Black-backed gull, or a Greater Fluff-tailed gull (ok, I made that one up), I just say "it's a seagull!" and protect my chips...

So, in a similar way, I get a bit vexed when people ask me how to stop their real Christmas Tree dropping pine needles all over the carpet.

Simple answer: are you ready for it?

Your Christmas Tree won't drop pine needles on the carpet because IT'S NOT A PINE!!

This is because "real" Christmas trees are either Fir, or Spruce. Not Pine. Why does that matter? Because Pine trees (Pinus) have needles. The others - Fir, Spruce, Douglas Fir, Hemlock, Yew, (not that many people use Hemlock or Yew for their Christmas trees) all have leaves. Flat, green leaves. Not needles. 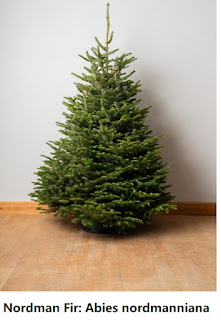 Fir = Abies: the usual/most popular ones are  Nordman Fir (Abies nordmanniana) as shown on the left, or Fraser Fir (Abies fraseri) which, frankly, looks pretty similar. 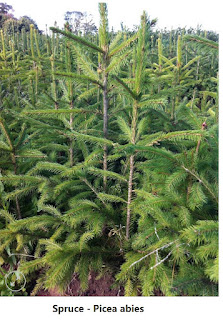 That's Spruce, on the right: again, they have that typical pointy-tipped Christmas tree shape.

How to tell the difference? Answer, come on one of my Tree ID courses in London next year... or if you can't get there, you can buy my introduction to Conifer ID - simplified, but not dumbed down - from Amazon.

Pine = Pinus, and although they are conifers, they are not generally sold as Christmas trees, mostly because they just don't have that nice pointy shape: when they grow up, they are flat-topped. And they tend not to have the regular spacing of the branches, which makes hanging the baubles a bit tricky.. and finally, they have long thin needles (*laughs*) which are held in bundles, leaving whole areas of the twigs and branches quite, quite bare.

So there you have it: to be botanically correct, your tree can't drop pine needles because it is not a pine. Well, 99% of the time it's not a Pine, there are bound to be one or two people who will leave indignant comments to the effect that they have a Pinus sylvestris (Scots Pine) currently in their living room, thank you very much, and it is indeed dropping "needles" all over the carpet. But generally speaking, "real" Christmas trees are going to be Spruce, or Fir.

Oh, and one thing which made me hoot with laughter, speaking as a botanist, is - brace yourself for a real in-joke, which no-one but another botanist would understand or appreciate - the name of an internet supplier of "real" Christmas trees: they've called themselves "Pines and needles". But they don't sell Cedar, or Larch, just Christmas trees.

*pause while I fall about laughing*

Posted by Rachel the Gardener at 18:00