Art in the Garden: Dior and a fantail

Isn't it nice when plants and sculpture meet and unite?

The final photo in this article shows a very happy accident of juxtapositioning (if there is such a word) (according to my spell-checker, underlining it in cheerful red zig-zags, "no there isn't" but I'm ignoring it) in one of “my” gardens, which came about from three unrelated incidents.

Firstly,  early in the year, the somewhat elderly owner of the garden took a tumble over the stone slab which used to mark the transition between the path and the grass.

So I was asked to remove the slab, and sink a line of red bricks, flush to the ground, in place of it. 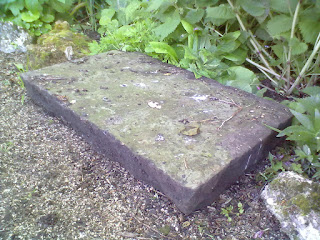 Here's the slab - it weighs more than I do (!) and I could barely move it, so having levered it out of the ground, I just shuffled it off the path into the bed, heartlessly squashing whatever small plants were growing there. 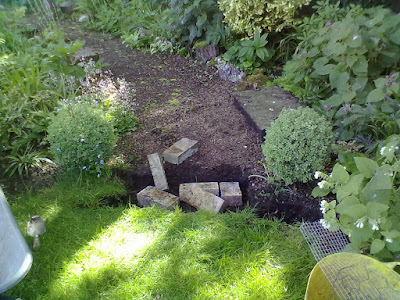 That left me with a hole, which was a very good start for sinking in my line of red bricks.

As you can see - right - the slab left quite a big hole, so I had to backfill it, in order to get the bricks to be flush with the grass. Here we go -  my new brick edging, with the slab moved off to one side.

Please note the total lack of any fern.

Secondly, we had to have some hedging work done behind the shrubbery, further round the garden.

This meant that the sculpture, “Dior”, and the plinth on which it stood, had to be moved out of harm's way, so I plonked them onto the slab, temporarily.

Just to get them out of harm's way.

The work took months...: and in the meantime, thirdly, the fern which had been hiding, unseen, behind the slab grew. And grew. And grew!

Now, in October, look at what a perfect fan-tail it has become: 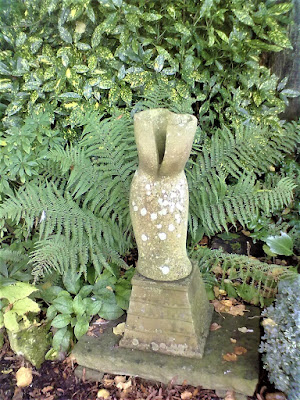 .... somewhere between a peacock, and the tail-feather-fan of a Las Vegas showgirl outfit.

The Client and I were both so pleased with this effect that we left it, just as it was.

Which just goes to show that sometimes, you don't need to be an arty garden designer, or to spend hours deciding on exactly the right position for your garden statuary!