For a start, it doesn't stink - ok, it does have a bit of an odour, and it's not one that I want to bring into the house, but it's not that bad... other names for this plant include Bear's Foot, which is somewhat nicer although not particularly appropriate,  or - according to Wikipedia - dungwort or setterwort. Never heard either of those two.

So, Stinking Hellebore it is, and what's so good about it?

Well, you are probably all familiar with the usual Hellebores, H.orientalis: big showy flowers, in shades of white, red and pink, they are just starting to put up their flower shoots now (mid winter) and in a month or so they will be looking like this: 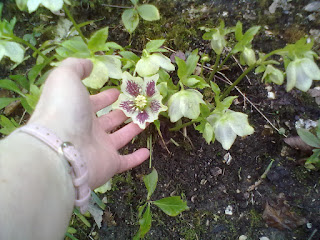 But at present they are no more than a small bud, usually still covered up with the blackening leaves of last year, so if you want something that flowers earlier, and is a bit more unusual, try H. foetidus.

The flowers are a vivid pale green, and on dull winter days they shine and glow, so they are perfect for shady woodland beds, for the back of borders, and for any of those tucked-away places that you don't really care about all that much, but which you can see from the kitchen window.

They are perfect for this sort of area because they thrive on neglect -  no, honestly, they do.  They'll self seed, and form colonies, with no human interference at all.   In fact, one Client of mine announced last spring that she wanted to buy some, having seen them in another garden. I was able to provide her with a bucket full of seedlings, weeded out from my own garden, free of charge: plenty enough to get a good colony going in her garden. I am confident that in about three years' time, she will be telling me to weed out unwanted ones...

But, although they do indeed thrive on neglect, they can benefit from a little subtle pruning in the early part of their flowering season. 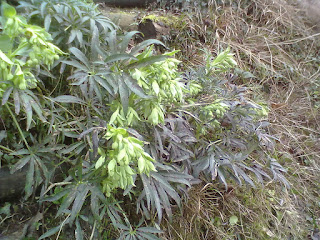 This is because, sometimes, the leaves swamp the flowers - by which I meant that sometimes there are just too many leaves, and sometimes the leaves turn black (if it's been a hard winter, usually) or go an unlovely, tatty, shade of brown.

This photo - right - shows a clump of them, with the leaves just starting to go black, and it was taken in early December.

In those cases, I get out the secateurs and carefully snip off the worst of the leaves: 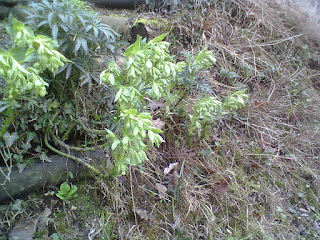 Lighter, brighter, and there are new leaves coming through all the time, to take the place of those dull, dying ones.

And this plant has a sneaky little twist in the tail - or, to be more accurate, in the flower.

Generally speaking, the flowers are an unusual bright lime green, but then, green is not exactly a special colour, in gardening, is it?

However, here's the interesting part - once the weather has been cold for a few weeks, the flowers develop a red tinge around the edges. 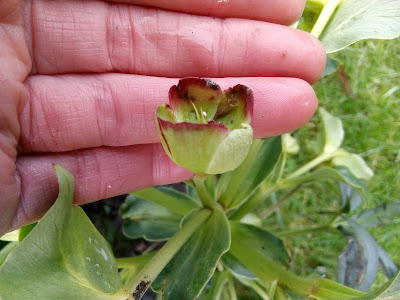 Not the best of pictures, but then, I'm not a photographer - I'm a gardener! So I just grab a quick snap, when I get ten seconds or so to spare.

And here is one of my ten-second snaps:  you can see the red rim.

You would probably expect me to say "...the red rim of the petals" but in this case - brace yourself for some botany - those are not actually petals at all, they are sepals.

If you're not clear on the difference between petals and sepals, come back in a week or two's time, I'll do an article about it. Just for you.

Getting back to the red rim on the sepals, it's quite subtle, but interesting: and the more you look at them, the more interesting they are. 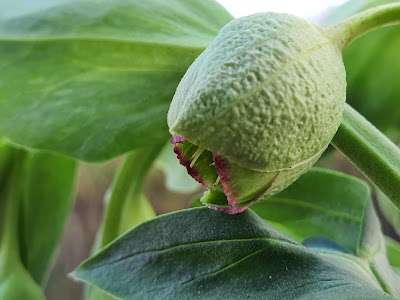 Here - left - is a photo taken by my buddy Max (who really is a photographer!) and it shows the texture of the outer sepals: isn't that weird?

And it shows what a wonderful world surrounds us, if we just get outside and look at it a little more closely...

Anyway, back to the plot: in early-mid winter, then, it is well worth going out with the secateurs and snipping off any dead, or dying, brown or black leaves from your Hellebores, because then you will be better able to see the flowers - and whether they are petals or sepals, doesn't really matter!