I always thought that Snow in Summer was a plant. 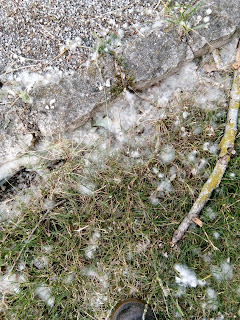 Until I was working  under a large Poplar the other day!

The problem is that Poplars are wind-pollinated, and they also use the wind to spread their seed, so the female trees produce masses of fluffy white fibres to support the seeds.

Just like Dandelions. Only on a rather larger scale...

This white "fluff" is produced in June, and if it's not a particularly windy day, it can pile up and look just like snow. Where I live, there are a small group of large Poplars, and it's quite an impressive sight, watching the road collect ankle-deep drifts of the stuff!


All types of Poplar do this, as do Willows: but only the female trees produce seeds, so if you want to avoid it, buy male plants - although, of course, the trick is to find trees that have been accurately labelled, as you won't know for sure if your tree is male or female until it reaches maturity... and it's a bit late, then!

Apparently it's a big problem in Russia and China, both of which used Poplars as a cheap and quick way to "green up" their cities after the second World War, not realising what a problem they were creating.

So what is the "real" Snow in Summer? 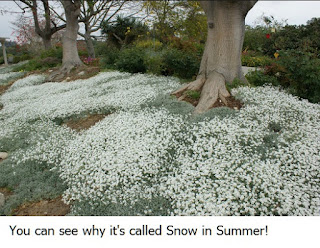 As you can see, the name is well deserved!

Posted by Rachel the Gardener at 06:51