A while ago I wrote an article about moving Common Spotted Orchids: if you can't be arsed don't have time to read the full article, then in brief, I have a garden where part of my job is to locate any Common Spotted Orchids which are germinating in the grassy paths, dig them up, and replant them elsewhere, so that they won't get their heads chopped off mercilessly when the Client runs round on the sit-on mower. 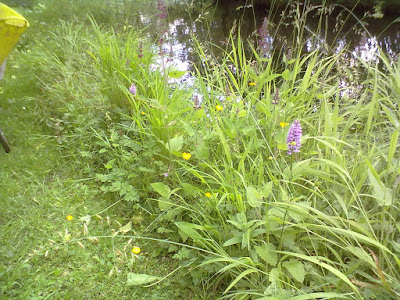 By doing this repeatedly, I have built up three new colonies of the orchids, proper name Dactylorhiza fuchsii, as well as the original spread of them.

Here - left - is the lake-side colony, now becoming quite robust! (Photo taken in early June, while they were flowering.)

Today I had a question on this matter from Laurence, who has rescued a handful of these orchids from decapitation by imminent mowing, and has potted them up.

He says that they have done really well, but now it's time to move them to a permanent home in the soil, where they can naturalise.

He asks when would be the best time to move them to their new home, now that they have finished flowering.

This is an excellent time: the seed pods are forming: Here is a photo of what these Orchids look like now, in late July - right.

These are my own ones, grown from seed:  I rushed outside and took a quick snap to show you what they look like after flowering.

As you can see, the flowers are gone, all that remain are a few tatters of brown petals.

The green "ear of wheat" parts are the seed pods, and each one contains thousands and thousands of teeny tiny, dust-like fawn-coloured seeds.

So plant them out now, or move them now, while the seed pods are still green and intact.

In another couple of weeks, they will turn brown as they dry out, and will split to allow the seeds to escape.

So by moving them now, you won't waste any of the seed: once they are installed in the new location, the seeds will naturally fall to the ground around them, thus starting your new colony.

As per the other post, the tiny seedlings which will pop up next year do look rather like grass, but the following year they should start to produce broader, spotted  leaves, which makes them very easy to find. 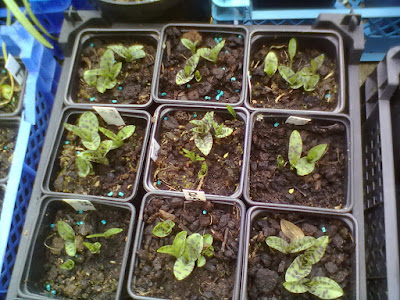 Here's some I grew earlier (left).

This is what they look like in May - just a few sprouts of wide green leaves, held in opposite pairs.

Not all of them will have the spots, but after a while you "get your eye in" and learn to see the smallest hint of a spot, combined with the way the leaves are arranged in pairs.

This is a useful skill to master, as they will, once yours have set seed, spring up all over the place, so you may well find them popping up in quite unexpected areas.

My front yard - for example - is full of plants in pots, for sale: and any number of times I have to advertise them as coming with "free Common Spotted Orchid included".

And in my back garden, I have strawberries growing in a pierced pot, and yes, you've guessed it, there is an Orchid interloping amongst the fruit.

So there you go: once you have some Common Spotted Orchid in pots, whether you bought them, or potted them up yourself, just wait until they have finished flowering then, before the seed pods darken to brown, plant them out in your chosen location and hopefully, within a couple of years, you'll find that you, too, have them popping up all over the place!

Posted by Rachel the Gardener at 15:22