How to reduce a Standard Bay tree

Firstly, what is a standard Bay tree?

Answer, Bay is a woody evergreen shrub, the leaves of which are used in cooking.  A "standard" is a plant which has been trained in such a way that it has one single, central stem or trunk, with a mop-top of foliage.

Why do we do this type of training? It makes a neat shape, very decorative, and very much a part of the formal English garden. It also means we can have a tree or shrub which would otherwise be too big for the area.

Bay, in particular, is often found in the middle of a herb garden, as a centre point, giving height and shape all year round.

"Standards"  can be almost any plant, not just Bay: some plants are tough enough to support themselves, while others will need the support of a stake while they are growing, and nearly all of them - unless they are very woody-stemmed - will need to be staked once they are grown, as this design is very top-heavy, and a windy day can destroy them. 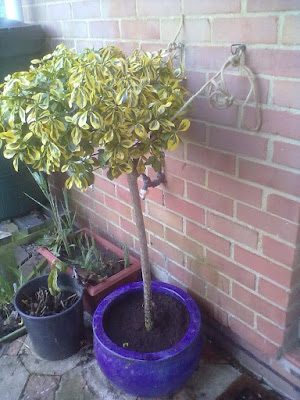 Here - left - is a variegated Euonymus which I trained as a standard, and no, it's not tied to the wall as punishment for bad behaviour, or because it can't stand up by itself, I had just repotted it and wanted to hold it stable until the roots had settled.

You can see that this one is about breast-high, and on every other month of its life, it is not staked or tied to any sort of support.  You caught it on a bad day... sorry!

Which plants are used in this way, then?

Well, pretty much anything can be made into a standard if you are determined, but the favourites have to include Roses, Fig, Wisteria (I don't like that, myself: in my opinion Wisteria are meant to be BIG, not tortured into head-high lollipops), and - these days - just about every type of conifer, suitable or not.

Almost any woody shrub "could" be pruned into a standard, a lot of Yew topiary is based on the standard, and of course many, many fruit trees are grown as standards. 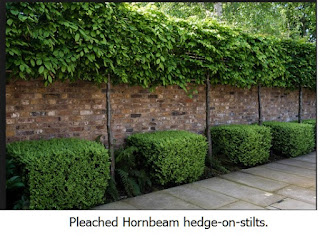 They can be at almost any height: those "hedges on stilts" - right - which are called Pleached hedges are basically a row of standard trees (in this case Hornbeam, but almost any tree can be treated this way), where the top tuft of foliage is allowed to grow out sideways once it has reached head height, but is not allowed to grow forwards or backwards.

I've even seen Hebe pruned into waist-high standards, which was interesting.

How do you make something into a standard?

Answer, start with a young, strongly growing plant: pick the most central, strongest, most upright branch and prune off everything else.  Put in a good strong stake and tie the branch to it in several places, to keep it straight and upright.

As it grows, pinch out or rub off any buds which try to grow on the stem, and only allow a tuft of foliage at the top.

Keep it up for a year or two, and lo! and behold, you will have created a standard.

They need to be trimmed and shaped every so often, and Bay is a bit of beast in this respect, as it quickly grows thick, bushy, and top-heavy.  Most people choose Bay because they say "we use it a lot in cooking" and the original idea was to have the herbs growing convenient for picking, hence the inclusion of a standard Bay as a centrepiece in a herb garden.

The idea being that every time you go out there, you pick a couple of leaves, which keeps the Bay tidy and neat, and also forces it to keep producing new, fresh, tasty, leaves.

But I have yet to find anyone who uses more than one or two leaves a year! So they tend to be allowed to just grow, willy-nilly, until they are coarse, ragged, gigantic things, looming over the rest of the garden and generally getting in the way.

Here's one belonging to a friend: it's rather oddly placed, being right next to the rotary washing line, but as it's quite an old one, we assume that the previous owners had ideas about a herb garden, and maybe changed their minds? Or they planted it as part of a herb garden, then over time the other herbs were replaced with easy-care grass, leaving just this one poor specimen all alone.

For whatever reason, here it is:  a head-high standard Bay tree as it looked a couple of Novembers ago. 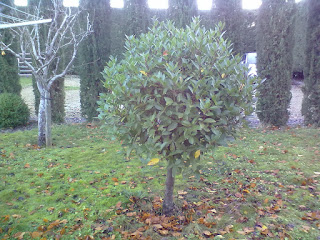 Quite nice, yes? Neat shape (that was me, I pruned it earlier that summer), nice clear trunk, quite balanced in size and shape. 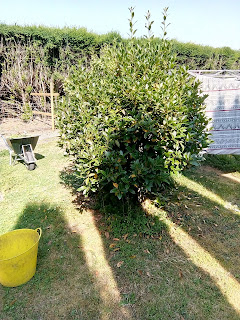 Cries of "Oh no! Why didn't you call me sooner!"

As you can see, it is now two foot higher than the rotary drier, some of it is reaching for the sky, and the whole thing is so wide that the drier is no longer actually "rotary", and is more "stationary".

It's also lost the nice clear trunk altogether, for two reasons: firstly, the lowest branches have become so weighty that they are hanging lower, and secondly because the Bay has thrown up several shoots from the base, thus obscuring the trunk.

And, incidentally, making it impossible to mow around it, as they used to.

So, first job: get on hands and knees, and cut off all those shoots coming up from the base.

Virtually all standard-worked shrubs/trees/plants/whatever do this: it's as though they are deliberately trying to undermine our hard work by throwing up long sturdy shoots from ground level, or from half-way up the cleared trunk.

In a perfect world, the owner would check every few weeks for any signs of regrowth on the cleared stem, and would rub off any buds or leaves while they are tiny: this causes the least stress to the plant, and the least amount of re-growth.

But if you don't notice them until they are as thick as your thumb, well, no big deal, just cut them off as close to the trunk as you possibly can.  And then try to check it more frequently!

Second job, look at the lowest layer of branches, and cut off any which are hanging down below your chosen "lowest level" point.

Third job, reduce the size of the mop top.  I tend to do this by eye: I look at the whole thing and decide how big it "ought" to be, based on the height, the leaf size, the general proportions, the surroundings etc.

If you don't feel confident to do that, part the branches and look inside the bushy top: you should be able to see where the last person pruned it, because any branch which was cut will have forked out into 2, 3 or more smaller branches. Simply cut to that point again. If you want it to be a bit bigger than it was originally, cut each of the 2, 3 or more smaller branches about half an inch from the point at which they branched.

If you want to take it back to how it used to be, cut just below (or "inside") the fork.

Stand back, and assess what you have left: if there are any branches which are still too long, snip them off to about the same length as the others you have just done. 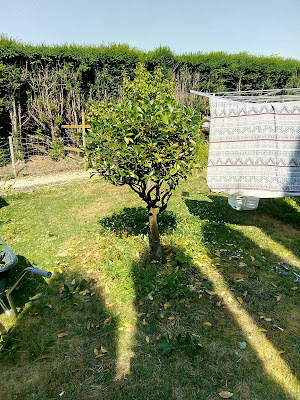 Back to being breast height again - oh, the picture is slightly deceptive as there's a Pear tree to the rear, whose branches make it look as though I made a right pig's ear of getting the Bay back to a round shape.

But with the sun very strong, this was the only angle from which I could take the photo, so look more closely and you'll see that the shiny Bay foliage goes across the top in a rounded arc, with the duller, paler Pear foliage rising up behind it.

As mentioned in previous articles, I am so not a plant photographer!  Plus, I am normally being paid to work, not to take photos, so I am in the habit of ripping off a quick snap or two, taking bare seconds to compose the shot.

Well, to be truthful, I don't spend any time at all "composing the shot", I just point and snap!

Anyway, the Bay is now clear stemmed again, mowing is now possible: the drier is once again free to spin like a mad thing, and there were two barrow-load of Bay leaves to go on the bonfire pile.

With a well-established, planted shrub like this one, there is no need for any special after-pruning care, but if yours is in a pot or tub, then it is only kind to give it some feed - a small fistful of balanced feed, or fish-blood-and-bone, or a watering can of diluted liquid seaweed - and a good watering, as pruning will prompt it to spring into life and make a whole load of new shoots, so a bit of help with food and water will be appreciated.

And you can have a really aromatic bonfire!!

Posted by Rachel the Gardener at 09:53