Why is it so hard to take good photos of plants?

Yesterday, the sun shining on the Lupins (wet with rain) was stunning: they were positively glittering!

And yet, this is the best I can do: 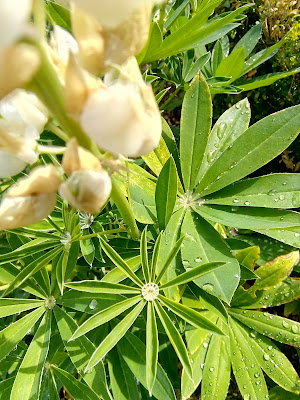 a) taking photos with my phone, and

b) being self-employed and therefore paid by the minute - as it were - I never spend more than about 0.000001 seconds in taking the photos.

But it's still a little disappointing, to be unable to record these fleeting moments of sheer beauty.

Are there, I wonder, any useful tips or hints on how to get better photos of plants with only a cameraphone?

And the answer appears to be, yes: there are a couple of things you can do to improve the quality of your quick snaps.


Tip  1: Use natural light. Don't bother using the flash on the phone, it's an LED which is harsh, and - particularly in cheaper phones like mine - is not necessarily perfectly in sync with the shutter.

Tip 2: Only take photos when you have "enough" natural light. That means, don't bother if it's so dull and overcast that you can barely see the details, but also, don't take photos in bright sunlight, as the colours are bleached, and the contrast is too great between the bits in sun, and the bits in shade.

Here's one I cocked up earlier: I thought the bright sun would make a good clear picture, but oh dear me,  no! 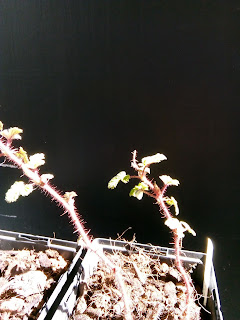 Tip 3:  Get in closer. It takes a professional photographer and their expensive DSLR cameras, to get a great panoramic shot which also shows detail - it's all about depth of field. Our little phone cameras do much better with close-ups, so don't waste time doing the grand panoramic shot for anything other than reference snaps.

Tip 4: Don't get TOO close! Most cameraphones don't have a macro setting, or if they do, it's not a very good one. Too close and the picture is just blurry.   Like this Alchemilla: 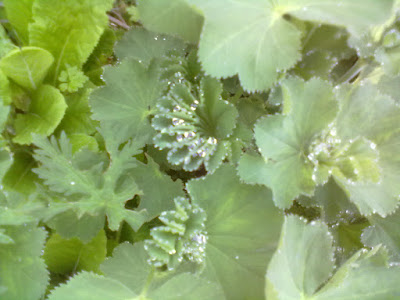 Tip 5: Isolate your specimen. How many times have you taken a photo of something lovely, then when you get home and download the photos, you've found that you have a crisp sharp photo of the ground below.... if you are taking photos at home or on holiday, take a piece of plain paper to put behind the flower, or other object of your desire.  If you're working, and can't take the time to do that, try to find an angle where your cameraphone isn't being distracted by something behind the object - or, try to put your hand or arm close behind it, to force the camera to focus where you want it to.  I have, btw, only JUST discovered that my current cameraphone allows me to tap the screen on the bit I want it to focus on! It doesn't always get it right, but it's a great improvement.

The photo below could well be titled "Not that one, idiot! THAT one!" 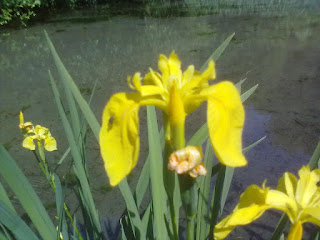 Tip 6: Go for landscape orientation rather than portrait.  It's more natural! Again, being a bit of a thicky, I have only JUST realised that my current phone, unlike the previous one which I had for about 8 years, takes photos which are portrait in format, when I hold the phone "upright", as it were.  To get landscape photos, I have to hold it sideways, which to me, seems alien and weird.  The old phone was the other way round....

Tip 7: Use the grid.  Grid? What grid? If you open your camera facility, and look through the settings, you should find one labelled Grid. It puts up a faint grid on the screen, which allows you to use the Rule of Thirds to help you create a "nice" composition. If you don't know about the Rule of Thirds, there are plenty of articles about it.

Tip 8: Crop, and crop again.  Most photos benefit from a bit of cropping when you get home: it's amazing what a difference it can make.  Photos which may have originally been a bit unbalanced can be "forced" into accommodating the Rule of Thirds, by simply cropping them, which just means changing their size/proportion. I always keep the original, and use "save as" to create a copy which I can then play around with.

Oh, and Tip 9: take several. Don't just take one - the great thing with digital photos is that you don't have to pay to have them developed, so you can take seven or eight snaps one after the other, moving slightly closer, slightly further away, to one side or the other, in the hopes that at least one of them will turn out to be good. I learned this myself, from watching a professional photo shoot: they took hundreds of photos, then suddenly there was a cry of "That's it! That's the money shot!"  The real trick these days, and this probably ought to be Tip 10, is to discard the rubbish ones. Go on, delete them! If you've taken 15 photos of the same flower, pick the best one or two, and delete the rest.

Hmm, which leads on to Tip 10: File Your Photos!  I make it my practice to download photos from my phone every day, or every other day, then go through them on the computer and prune them: I delete anything out of focus, or totally rubbish: then I go through the "I have taken 8 photos of this one thing" sets and pick the best one, deleting the rest: then I rename the good one and put it in the relevant folder, so that I can find it again if I want it.  Obviously it's up to you to decide on a filing system that suits you: it could be by day, or by place, or by theme: it doesn't matter how you file them, as long as you are able to quickly find the one you want, months later. End of lecture.

So, armed with these Tips, I took a look back through some photos I took earlier, and indeed I am a pathetic garden photographer:  most of my photos of plants are just a mass of green, or a splodge of colour here and there. Or they are massively out of focus. Sad but true.

Here's an example: in one of "my" gardens there is a lovely Tamarisk, and in May I was apparently moved to try and capture it's fluffy pinkness: 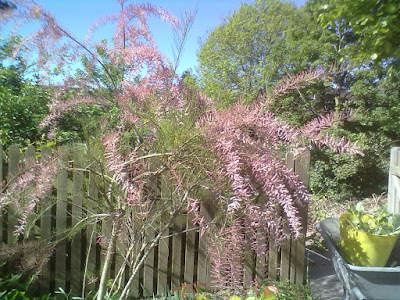 Nothing special. Actually quite messy.  And the inclusion of the wheelbarrow and bucket full of weeds hardly adds to the glamour of the shot.

The second photo showed that I'd realised this, and had moved in a bit closer: 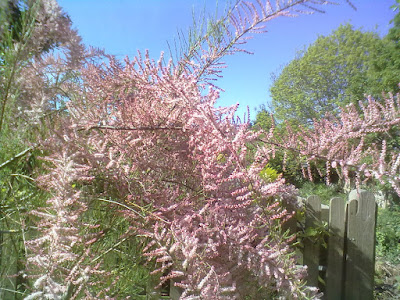 Better, much better, but still not earth-shattering.

I remembered that a lot of plant photos are taken pointing upwards, with the sky for a background, and the sky was a particularly clear blue that day. So I took a third photo, having got even closer: 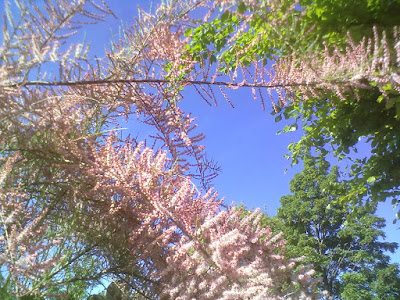 Hmm, sort of nice - the sky is a lovely clear blue, and the bright green leaves on the right make a nice contrast - a bit of a happy accident, I'm fairly certain that I didn't even notice them when I took it.

I think it's still rather messy, though, and might have been better if I could have removed or moved that one thin branch which is making an un-natural straight line across the top third.

Although now, having learned about the Rule of Thirds, it's actually a good thing? Or is it?

Well, having just done this little bit of research into improving cameraphone photography, I thought I'd implement Tip 8 as an experiment, and cropped the photo to remove the straight branch:

The act of cropping also turned it into a much more landscapey/widescreen picture, which is possibly a good thing. What do you think?

As a further experiment, let's look again at my lupin picture from the top of this article: 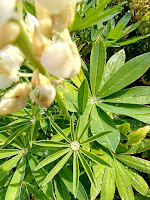 This is the original, left: the flowers are out of focus and it's in portrait orientation.

So my first job is to crop out the flowers, which by happy accident, puts it back into landscape format. 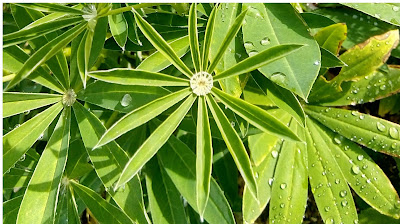 Well, it's nicer without the blurry blossoms!

But now the main focus is on the one leaf, and it's almost exactly dead centre, which is a bit of a no-no according to the  Rule of Thirds.

Of course, in art, rules are made to be broken, but in most cases a "rule" has become a "rule" because it is usually correct, and worthwhile.

So I cropped it again, chopping off some of the right-hand margin, which puts the main leaf off-centre, and has the further advantage of removing most of the rather dull and discoloured leaf on the far right. 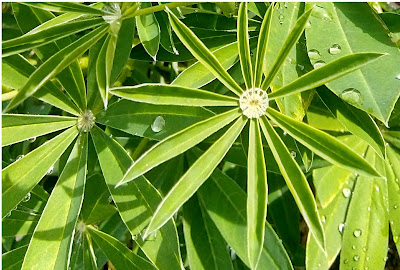 Of course, the format is now slightly "off", the proportions are slightly "wrong": I could choose to crop a bit more off the bottom to get it back to more pleasing proportions, but then I'd lose the full length of the leaf, and I rather like it like this.

So, there you have it: a few Tips on how to get more from your smartphone when taking snaps out in the garden, and a quick demonstration on how a wee bit of cropping can make quite a difference...I'm not claiming that the final picture of "Rain on Lupin Leaf" will ever win a competition, but it's certainly more interesting than the original photo was!
Posted by Rachel the Gardener at 09:38