Lavender: time to cut it back

2019 has already been a weird year.... we had a cold, 'orrible spring, with no less than FOUR late frosts, interspersed with nice mild weather that prompted everything to start growing, right before the next frosty spell came along and blasted it all to death.

Last year it was well into September before I was cutting Lavender down, but here we are, barely into August, and I'm at it already.

This, by the way, is why I never issue Gardeners' Calenders: nor do I usually write articles saying "Now, dear children, it is time to cut down those raspberries..." and so on.  Life is very variable, and never more so than in a garden.

Right, let's get on to Lavender.

Why do we cut it down at all?

Annual trimming after flowering will help to keep the plants compact: if you don't do it, then after a couple of years you find that you have untidy, leggy, woody plants which "fall open" as they start flowering, exposing the bare woody stems. After another couple of years, branches will start to break off, leaving the centre even more open and bare - and by this time, they are usually flopping all over the place, instead of standing up and looking lovely.

They'll still be loved by the bees, of course, but not so much by the owner!

So we cut them back, every year.

The next question is always "when do we cut them back?"

My answer is always the same - once the flowers have more or less finished.  If you wait for every single last flower to die, you'll never get the job done, so my rule is that once you have a haze of brown, rather than a mass of blue/purple/white, then it's time to cut them down. 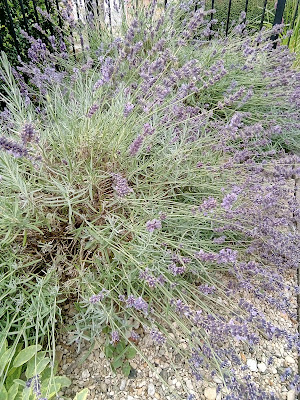 There's another good reason for doing this work sooner rather than later - if you leave it too long, you'll find that the plant is growing again, and this new growth will quickly overtake the bottoms of the flowering stems, so you can't cut one without damaging the other.

Here's a photo - left -  of one of my gardens, with the lavender which is not quite ready for trimming yet: as you can see, they are still fairly colourful.

Interestingly, lavender are only "supposed" to have a life span of around five years: I used to be very friendly with Pete and Val Williams who ran The Herb Garden in Kingston Bagpuize house (now, alas, they've retired) and they astounded me with that piece of information.

I thought that lavender lived for years and years, and I am sure there is a chorus out there, right now, of readers saying "but I've had the same lavender plant for the last 20 years!", but apparently, they are short-lived plants. That's why cutting them back hard is such a good idea - quite apart from keeping them neat, it extends their lifespan by putting off the day when they start to flop open and split their stems. 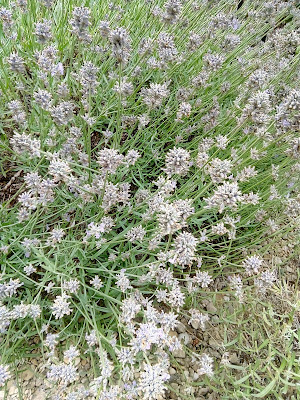 Now look at this photo - right - and see the difference?

The flowers are no longer mauvey-purple, they are grey.

This means it is time to cut them back, so get out your secateurs, and a bucket for the bits, and start to cut.

You will always read the same advice at this point - "do not cut back into old wood" and it's good advice, because if you cut back into bare brown woody stems, they won't grow back.

The trick is to look for where the stem is still making new growth, and cut just above that.


As no-one has the time to cut each stalk individually, the technique is to isolate each branch of the lavender plant in turn, sweep up all the long stems into one hand, and cut across with secateurs, using the other hand.

Aim to leave two or three sets of the leaves, and you have to balance this requirement with wanting to leave a fairly neat dome of cut foliage, as you will have to look at it all the way through the winter.

This is one of those things which is so much easier to demonstrate than to describe!

I find it easiest to start at the outside of the clump, especially if they are fairly old plants. Cut a few "handfuls" quite low down, then gradually taper the cuts as you work your way up to the top of the clump. I don't like ending up with GI-Joe buzz-cuts on "my" lavenders, so I aim to get rounded domes: sort of "cloud pruning", really.

If you have your lavender as a hedge, then it might be appropriate to cut it with a flat top and flat sides, although when you do this, you may have to sacrifice a "correct" cut here and there, in order to remain within the outlines of your sharp edges.

Once done, dispose of the cuttings in your green waste bin, or on the bonfire - I don't even attempt to compost lavender, as they are usually very woody, and are always full of seeds! - sweep up the inevitable scattering of seeds, and there you are, all nice and tidy for the winter, and by cutting it back hard, it should grow back to the same size next year as it did this year, without getting larger and larger. 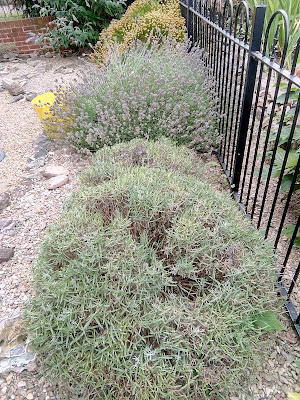 Here's a photo of the job half done, to show the difference in size: the clipped ones are neat domes of fairly dense foliage, half the height they were.

And you can see in the one nearest to us, that this plant is just starting to fall open in the middle, so this one is going to be replaced next year.

In this particular garden, we like the up-and-down look of having differing heights, so I cut each one as though it were growing in isolation - with no attempt to make them look homogeneous.

This also explains why some of the plants are older than others: we don't rip them all out one year and replace the whole lot, we just take out one at a time, as they start to look a bit old and tired.

In some gardens I would be expected to clip them so they are all soldiers in a row: but here, we prefer to do it a bit looser, and that is one of the wonderful things about gardening - there are no hard and fast rules, and we can choose to do things how we like them done!

So there you have it, how, why and when to trim your Lavender!

Posted by Rachel the Gardener at 17:05