If you've ever grown fruit on trees - apples, pears, plums, that sort of thing - you might have heard the term "June drop".

Ever wondered what it means? 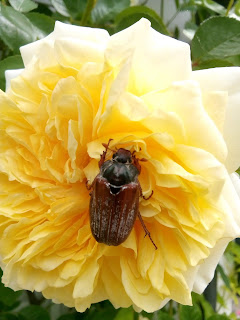 What happens is that each flower in a "bunch" gets pollinated, and if all of them are fertilised, then you get as many fruits as there were flowers.

This sounds like a good thing - ooh, lots of fruit! - but the tree can only support so many fruit, in two ways: firstly, a heavy crop of fruit is literally heavy, and can snap the branches - and secondly, if there are too many fruits in each bunch, then you get a lot of little tiny fruits, instead of a couple of nice big juicy ones.

So what do we do about it? Traditionally, we thin out the fruit: as soon as the fruits start to form, we look through the bunches every week or so, and remove some of them.

The next round of removals is for any which are markedly smaller than the others - the runts of the litter, as it were.

But the complication comes when we get to June, and the traditional June Drop. This is a natural phenomenon whereby the tree decides for itself whether it has too many fruits forming, and voluntarily drops a proportion of them. 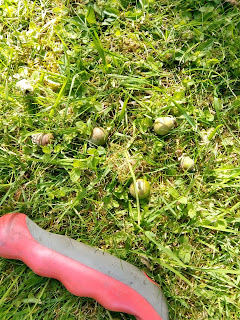 Yesterday, I was merrily clipping the edges of the lawn around an apple tree when I noticed a strange texture underfoot: the grass was oddly lumpy.

Closer inspection showed a mass of teeny tiny apples, which have been "June Dropped" naturally by the tree, at a very early stage of their development.

Great, saves me some work!

The eternal question in my mind, when thinning fruits, is "are these small mis-shapen fruits which I am about to remove going to be dropped anyway during the June Drop, so am I wasting my time doing it manually?"

Actually, there's an even worse Eternal Question, which is this: does the tree drop a fixed percentage of fruits, because if it is always going to drop, say, half of them, then what if I've just removed the fruits which the tree was going to drop anyway (as I am sure the tree would agree with my selection of naff-looking fruits), in which case will it now drop half of the "good" fruits which I have left?

I have no answers to this conundrum.

If I had my own orchard, I'd do experiments with photographing, marking and recording each bunch of fruits, and I'd manually thin out some, leaving others untouched, to see what level of difference there is.

I'm certain that there is SOME difference, because I have a Client with a particular apple tree which I normally thin for them, as the fruits form: and one year I wasn't able to do it, I can't remember exactly why - I think we had several major garden projects going at once, and I just didn't get around to doing it.  And that summer, they definitely had masses of very small fruits, all strangely shaped where they were crammed up against each other, instead of our normal crop of good-sized, edible ones.

So I do know that yes, it is an important part of cultivating fruit, but I don't know the answers to my Eternal Questions.

(I'm not even going to mention biennial bearing, where trees alternate between bearing a heavy crop one year, and a pathetic feeble crop the next.)

Oh, one more thing about June Drop: I wrote recently about hoes, which are not my favourite tool (if you want to know why, read the article!), but if you have a Swoe, which is a particular type of hoe, they can also be used, during the June Drop season, for playing Swoe-Apples, a game I invented where you use the Swoe rather in the manner of a golf club (with overtones of lacrosse, as you have to hold it in front of yourself) to flick fallen apples off the lawn into the beds, where they can rot down and add organic matter to the soil. Two points for a clean flick: lose one point for an apple that poings backwards. Beats all that bending down to pick them up!