They're a bit late this year, but look out everyone, Lily Beetles are here with a vengeance once again.

What's a Lily Beetle? I hear you say. Well, if you don't know what they are then you are either very lucky, in that you have never had them, or you don't grow lilies.

Or, possibly, you have given up growing Lilies, as they never seem to do well for you? 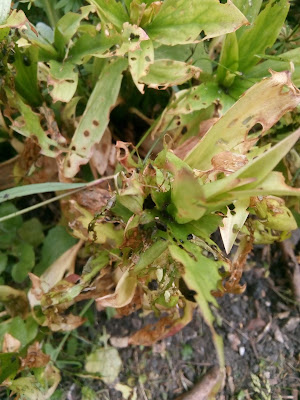 ... then you know the pain of Lily Beetles. Disgusting mess, eh? The leaves have been shattered, shredded to nothing. and the flowering buds have been completely eaten away. 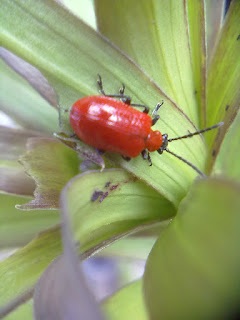 If you don't know what Lily Beetles are, here's one I found earlier (don't worry, it's dead now) - they are quite large, shiny bright scarlet, beetles, which simply drool over our beautiful Lilies, and to a lesser extent our Fritillaries.

The adults come flying in, usually from mid May onwards: they scoff the leaves, often leaving those squared-off holes, and then they lay their bright orange eggs on the underside of the leaves. 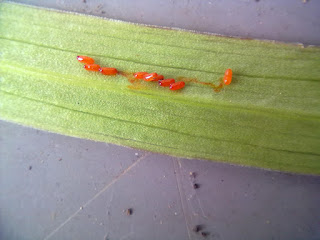 Here's a string of freshly laid eggs - right - and if you find two or more of the adults doing the piggy-back thing, you know that these eggs are about to be laid, so there's an extra incentive to destroy them.

These bright orange eggs hatch very quickly into larvae, which then cover themselves in their own excrement (“charming!”) for disguise, so we can no longer easily see them.

These larvae then, under cover of the black poo, eat what is left of the leaves, and this is what leaves our plants looking like nothing on earth - tattered, ragged foliage with clumps of black icky stuff on them.

If  you are very lucky, they'll only eat the foliage and leaves the flowering buds alone, but the lack of foliage will cause the bulbs to be seriously distressed, to the point where they may well not flower at all the following year.

So, what can we do about it?

Answer, get out there now, and start looking for them. They are ridiculously easy to spot, being bright scarlet, but they have a nasty little trick: when disturbed, they fall to the ground and lie motionless on their backs, so you can't see them. 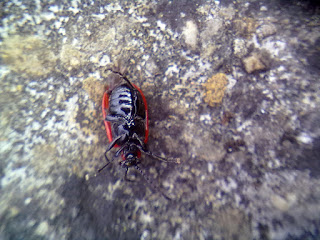 Hard to spot on a concrete path, quite impossible to spot on dark earth.

This means you need two hands - cup one underneath the leaf, then gently nudge the beetle off the leaf into your hand.

Or, crease a sheet of stiff paper lengthwise, and hold it under the plant.

Either way, once you have them, crush them! Kill, maim, destroy!

As with many things in the garden, prevention is better than cure, so be vigilant now, early in the season: check your Lilies several times a day, and squish any adults that you find, before they get a chance to lay eggs. Be warned - they have hard carapaces, so when I say “squish”, I mean “crush underfoot, on a hard surface, or guillotine with a thumbnail if you are not squeamish.”

By killing every adult that you see, you can prevent them from laying eggs, thus saving your Lilies - and those of your neighbours - from an untimely demise.


After more than a decade of doing it, I am no longer squeamish, and at this time of year I am often to be found with a red-stained thumbnail.

If you don't quite fancy the search-and-destroy routine, the only alternative is to spray: most of the sprays are systemic, which means that you spray them onto the leaves, the spray is absorbed by the plant and circulates to all areas, the lily beetle eats the leaves which now contain the poison within the sap, and the beetle dies.

The downside of this regime is a) you have to do it a few days before the first beetles arrive, and of course we all forget: or possibly we're all hopeful that this year, we will be spared, b) it's using chemicals, and c) some of them will live long enough to lay their pesky eggs, so spraying is not a cure-all, but it can help to cut down infestations if you can get it on in time.