I'm sure I read somewhere that the internet was sinking under the weight of pictures of cats... probably true, there are whole websites dedicated to this topic. My favourite is.. oops, nearly lost all my street cred there.

Actually, I've had cats all my life except for the last 20 years (?) and I have to say, none of our cats ever pulled all the toilet paper off the roll (they would have been thrashed if they had tried it) or climbed up inside the Christmas tree (ditto). Presumably cats, like children, are not taught to behave any more?

This has been a year for plants not behaving as they are supposed to - not only do we have tulips flowering before they are even planted, but now we have deep-winter flowers appearing while it is still mild - look what I found last week: 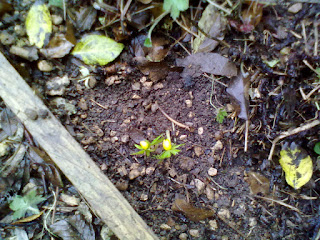 Can you see them?

A pair of Winter Aconite (Eranthis hyamelis) merrily flowering, all by themselves.

I am well aware that some plants appear and/or flower in response to temperatures rising or falling, whereas some respond to day length: those are the ones that can be "forced" by being kept in the dark, or by being subjected to artificial light.

I had assumed that Eranthis were a day-length plant, but now I'm not so sure, they seem to be out awfully early. Nice to see them, though!

Typically, they are not where they are supposed to be  - in this garden, the Client wanted to have a drift of Eranthis around a rather nice wooden seat in one corner of the formal lawn, so I dutifully provided and planted a dozen of them, a couple of years ago. Once Eranthis get established, they set seed generously and over time they form wide drifts or swathes of colour in winter - lovely! In this case, however, instead of seeding around the bench, they have chosen to seed themselves in the nearby border.

This means that next month, I will be sent out with a trowel to dig them up and carefully transplant them back to where they are supposed to be!

Now, back to that cat joke:


Who delivers presents to cats?

Santa Paws.
Posted by Rachel the Gardener at 09:11