Ferns and Hellebores - time to clear them away

It may be nearly Christmas, but now is the time to get out there and tidy up the "woodland" beds before the new buds start shooting.

One of my gardens has a fabulous Hellebore bank, but at the moment it looks like nothing on earth: 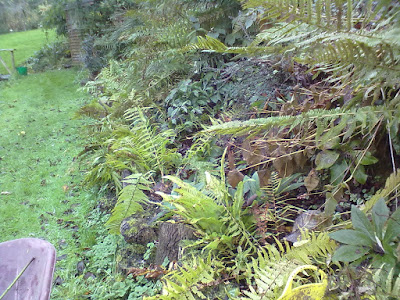 It's suffered this year, as we have been doing sterling work on the brambles higher up the bank (if you want advice about removing brambles, I have written about it here, here, here, and here) and this has led to a lot of trampling, and a good deal of crushing as the brambles were removed.

Sometimes, a garden just has to suffer, for the greater good *sigh* .

Anyway, the brambles have been cut back and removed, and now it is time to tidy up this lower area. 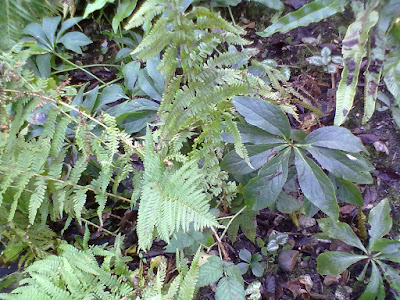 This is what is causing the messy look - masses of fern fronds, and a whole load of middle-aged Hellebore leaves.

I deal with the ferns first - which, just to keep you on your toes, I will be explaining further down the page - and then you can see what the Hellebore leaves are up to.

I generally nip off any dead-looking or really tatty leaves as and when I see them, starting in late summer, so the ones that are still growing are in quite nice condition: but there comes a time when you have to clear them out properly, and now is that time.

"Why? " I hear you ask, "Don't they offer frost protection for the flower buds?"

Well, they do, but Hellebores don't seem to need it. I have spent the last ten years or more cutting off Hellebore leaves before Christmas, and I have never lost a Hellebore yet.

So, what do you do? Take each old Hellebore leaf, one at a time, take a pair of sharp secateurs, apply one to the other. Cut the stalk as low down as you can - there is no point leaving a couple of inches of stem to go brown and 'orrible, and it will only stab you in the knuckles when you go round them again, as you inevitable would have to - unless you don't mind looking at dead brown stalks, that is.

As you do this, look for the tender new shoots coming up: some will be leaves, but many - hopefully, most - will be flower buds, so take care not to cut or snap those ones.

Sometimes you might find that there are already some of the new season leaves appearing: they will be fresh and green, and a lot smaller than the old ones from the past season. It's up to you whether to leave them or not: my rule is that if they are neat and tidy, I leave them, but if they are growing at odd angles, or are going to obstruct our view of the flowers, then they get snipped off as well.

Once you have cleared the leaves away, suddenly it all starts to look more hopeful. Take the opportunity to clear away any infiltrating weeds while you are at it, but keep the weeds separate from the leaves - leaves are not for composting, partly because they are as tough as Horse Chestnut leaflets and take forever to rot, but mostly because they harbour the spores of a particularly nasty (and mostly unpronounceable) fungal disease called Microsphaeropsis hellebori (told you) which causes leaf spot, and is terribly common. The only way to control it is to clear out and burn the leaves, thus breaking the cycle of disease-spore-overwinter-jump-to-new-leaf-disease.

If you can't burn your leaves, then either put them in your council Green Waste bin (they get their processing plant up to a much higher temperature than we can, which kills the spores) or bag them up and trundle them down to the tip, for very much the same reason. 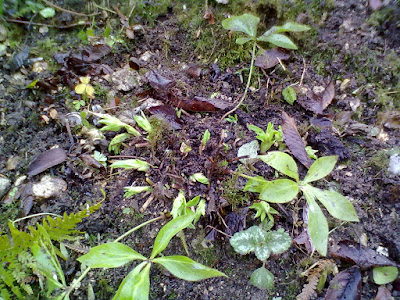 Things will look a little bare afterwards, but not for long - here is part of the bank, "after", and as you can see, there are already flower shoots coming through.

I hadn't quite finished this section when I took the photo (says she, defensively!) so there is still some debris to remove and some weeding to do - just look at that cheeky Lamium there! - but you get the general idea.

I find it's important to cut back the leaves  now, before the new buds really get going, otherwise the new bud are distorted by having to force their way through the old leaves, and there is a much higher risk of damaging the new, when trying to cut off the old.

And now here is the bank, from the same point: 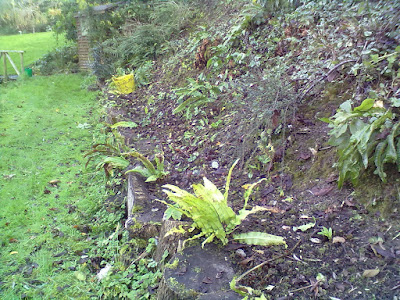 OK, much barer, but now we will be able to see the flowers clearly, and I will also take this opportunity to sling on a thick layer of our own compost.

Not to protect the buds, by the way, just to enrich the soil: being at the bottom of a bank, a lot of water comes washing down through the year, and much of the soil gets washed away. There isn't much soil here, with chalk underneath, so I have to add organic matter whenever I get the chance.

So a good layer of compost will make the bed look very smart now, and won't harm or hinder the flower buds. In a couple of weeks they will be several inches high, and it will be exciting to see what colours we have - earlier this year I had to move a lot of the planting when the bank edging collapsed, and I'm not at all sure that I put them back in the right order!!

So, what about those ferns?

Oops, I've run out of time! I'll write about those in the very next post.....

Posted by Rachel the Gardener at 09:36