Do you have plastic mesh in your beds?

This stuff has been driving me demented for years: 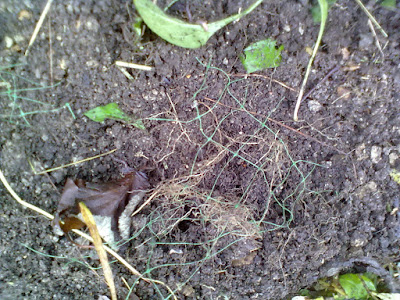 Have you ever encountered it?

Thin green plastic mesh, about 2" squares, buried in the soil.

It gets caught around the fork, it is tough as old boots so you can rarely break it or snap it, so you end up having to dig up whole section of it, disrupting the planting as you do so.

It makes me spit!

There was never any obvious reason for it - I had always assumed that it was something to do with landscaping contractors, as the only hint of a link between the gardens in which I find it is that they are either fairly new gardens, or have had obvious "cheap landscaping" input, by which I mean that they might have had some "design" work done, but not what you'd call good quality, long-lasting design- just those horrible makeovers where they slap down some turf in a circle, throw in some cheap-looking paving paths (which usually crack and crumble between the slabs, causing endless weed infiltration, but are otherwise set on a bed of 2' of concrete so they can't even be removed without heavy equipment) and cram in some massively unbalanced and badly-thought-out planting, such that the garden ends up with - as I encountered in one last year - one quarter-bed overflowing with rampant Vibernum, while the other three quarter-beds were desolate and bare.

Not that I'm biased against landscaping contractors (emphasis on the CON-tractors) you understand, it's just that I get lumbered with clearing up their inefficiency, short-cuts and total lack of planting knowledge... and in the case of this rotten stuff, I have to spend time digging it out, and it always takes much longer than it ought to, with frustratingly little apparent visible improvement.

So what it is actually for? Stabilising banks? Nope, I've found it on banks, but also on perfectly flat beds. Some sort of mulch matting? I don't think so, surely no-one would make a fabric that rots away to leave a skeleton of indestructible green mesh. Industrial-strength anti-squirrel netting? Well, it seems unlikely - why would people be protecting soil around herbaceous planting?

Eventually, after a lot of research, the truth surfaced - it's a material used by cheap turf suppliers. By which I mean, people who charge a lot of money but who use cheap, inferior turf. They grow it on this mesh stuff so that they can skim it up in really thin slices, thus using the minimum amount of good soil (and making the load lighter and less bulky so they can get more per lorryload), and so that they can lift it really early, before it has made a proper matted root system, so that they can get more crops off the same land.

It means that your turf might look nice when they first lay it, but for ever more you are going to be encountering the mesh - apparently, it can rise up through the grass and get caught on the blades of the mower, thus ripping up whole areas of lawn.

And woe betide your gardener if you decide to extend the beds (and this is where I come into it), as the mesh - if it wasn't removed by the action of lifting the turfs - turns up all over the beds for ever more and drives your gardener bonkers!

The manufacturer has apparently stated that it is biodegradable *snorts through nose* and, when a colleague of mine asked them how long before it disintegrated, was told "oh, only a year or so."  Not true! I have found it in gardens that have not had any changes done in over 10 years, and the photo above was from a garden that last had major work done when they moved in, which was over 20 years ago!

So if you are buying in turf, ask your supplier direct to their face if it has stabilising mesh in it, and if they say yes, cancel the order and go elsewhere.

Posted by Rachel the Gardener at 09:09