Now, I'm not in the habit of taking gardening advice from  HRH Prince Charles, but a few years ago a good friend of mine went on an outing to Buck House and came back full of a particular idea which is practised down there.

Apparently - I say "apparently" because I am only repeating what she said, I don't know this for myself - HRH is in the habit of planting up his enormous decorative terracotta plants with plants which are left in their plastic pots, the plastic pots being plunged into the terracotta pots.

After discussing this with a Client, she was so intrigued by the idea that we tried it with a Fig, in a particularly lovely but awkwardly-shaped ali-baba style terracotta pot.

Anyone who has ever tried to empty one of these out will tell you that it's impossible: the tapered-top shape means that the wodge of soil won't come out through the narrow opening, and if a plant has developed a good rootball, the only way to empty the pot is to chip the roots out one chunk at a time, which is both tiring and tedious. Last time I did this, I had spread out a plastic sheet, gently lowered the pot onto its side, and spent half an hour or more on hands and knees, patiently working away at it.

This is why it seemed like a good idea to employ the HRH-pot-plunging technique.

All went well for a couple of years, the Fig grew strongly, it looked lovely, but earlier this year we noticed that it was leaning to one side rather a lot, and had sunk down rather low inside the terracotta pot.

No problem, said my Client, it's in a plastic pot, isn't it? Just lift the pot up, push some additional soil underneath to raise it, straightening it as you do so, will only take you five minutes. 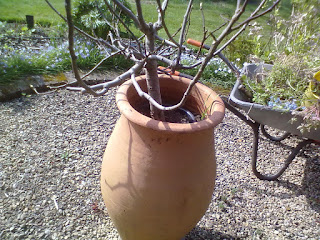 Here is the offending article: as you can see, the main stem is listing drunkenly to one side, and the whole thing has sunk down well below the rim of the pot.

You can just see the curve of the black plastic pot above the sunken soil level, a good 5-6" below the lip. 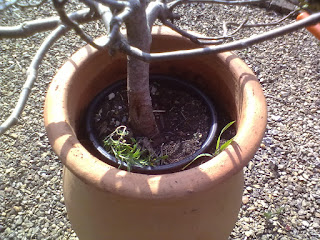 Here is the view from above (the main stem does not look quite so crooked from here, but I assure you that it is well off-centre) showing the pot, along with a couple of cheeky weeds that have sneaked in.

They were easily dealt with, but of course, the inner pot would not lift up. I heaved, I strained, I heaved again, but it would not budge. I tried soaking it, to soften the soil, but that just made me muddy.

The fig has rooted through the plastic pot, hasn't it?

Of course it has.

Never mind, said my Client,  all you have to do is dig down the sides of the plastic pot, go underneath and sever the roots, then just pull it out. 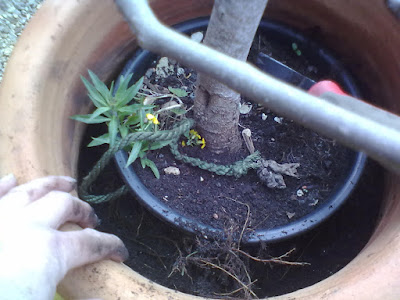 For a start, as you can see from this photo, there is barely enough room to slide a hand down inside the terracotta pot, and it took me twenty minutes to get to this stage - I have managed to scrape out a few inches of the surrounding soil, at the cost of several scraped knuckles, but I have now found roots, as you can see, and this means the fig has not only rooted through the bottom of the plastic pot and downwards, it has also spread the roots up outside the plastic pot.

By this point, the plastic pot was wiggle-able, but would not come loose, and I found it impossible to get a grip on it - it has a very small rim, and I just couldn't get any purchase, my fingers kept slipping off, adding a broken fingernail to the scraped .  I tried looping a rope round the rim,  to give me something to get hold of (you can just see the green rope in the above photo) but all that happened was that the plastic rim snapped, I jarred myself, and said a rude word. Sabrina, the Client's cat, walked away in a huff at this point.

I was feeling rather like walking away in a huff myself, but unfortunately I am paid to deal with these problems, so I stood back and reassessed it.

The good news was that all that heaving and straining had brought the main stem into a much more upright position.

The bad news was that I simply could not lift the inner pot up at all.

So I went to the Client, and told her that I could not get the plastic pot out, but that it was a lot more upright than before, and suggested that we just top up the soil to the rim of the terracotta pot, and pretend that I'd raised it.

It worked! The Client agreed, I rammed in a lot of soil to hold the plastic pot in the new, "slightly more upright" position, then - having checked that it does not harm a fig stem to be heavily mulched - I topped up the pot. 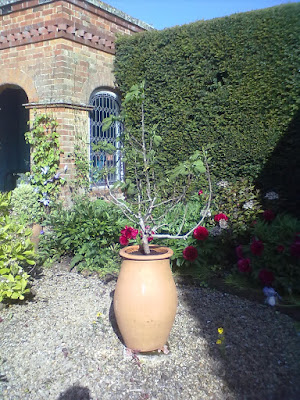 And a lesson learned, which I will happily pass on to all and sundry: if doing this trick at home, before you plunge the pot, take some strong nylon rope, make a loop long enough to go under the pot (doubled  up) and up each side, with enough above the rim to get hold of: get an assistant to hold these two loops as though they were using them to lift the pot.

Now take some more of the nylon rope and tie your lifting loop in place, just under the rim, and again towards the base of the pot.

Then plonk the whole contraption, rope and all, into the decorative pot. Backfill with soil, taking care not to disturb your lifting loop. When you get to the top of the pot, fold the  two hand-loops downwards and cover them with soil.

When you need to move the plastic pot, all you have to do is unbury those two hand-loops, and pull.

Posted by Rachel the Gardener at 14:46