Today is Christmas Eve, and by now most of us are thoroughly fed up with the whole holiday thing, having been suffering it in the shops since early November.

But it wasn't always like this.. I have a series of school books about the Chalet School, they were written by a lady called Elinor M Brent-Dyer, about a pair of English sisters, one much younger than the other, who moved out to Tyrol and started a school. The first one was written in 1925, and she kept banging them out at a rate of more than one a year,  right through the war (which had quite an impact on the school), through rock and roll (which bypassed it altogether) and right up into the 70s. They are utterly fascinating as a social history of private girls' education, continent-based but still very "English".

The parts of the earlier books that always caught my interest - quite apart from the fact that having their hair washed was something they were taken to a hairdresser for - were the descriptions of Christmas, which didn't start until late on Christmas Eve. That was the day when the servants - servants!! - were given the afternoon off to go and do their shopping for gifts, and was the day when the tree arrived and was decorated ready for Christmas day.

They didn't do a lot of gardening when they were based in Austria, apart from the annual wrapping-up of the rose bushes in sacking to protect them from the snow. This year, in this country, I have done very little plant protection: last week I did finally wrap up a fig in a pot, and a fairly new Sorbaria which the Client thought might benefit from another year of protection: it's been so ridiculously mild that no-one can quite believe that it is ever going to actually get cold again.

The 10-day forecast says we are going to have double figures, 13-14 degrees, right to the end of the month, which is quite extraordinary: and the long-range forecast is "mild and wet" right through to mid-January, so there doesn't seem a lot of point in wrapping up the plants.

If you do decide to go ahead with plant protection, here are a couple of Expert Tips: don't use bubble-wrap or any sort of plastic: the plants will still be "breathing" even through the winter, and the first sign of sunshine will cause them to "sweat" inside the plastic wrapping. This will lead to mould and fungus, ugh.  Instead, use horticultural fleece, which is lightweight and usually quite translucent - the light can still get in to the plant, which is kinder than plunging it into darkness for several months.  Even leftover landscaping fabric or membrane is better than plastic, but lightweight fleece is best of all, and can be re-used year after year if you are careful when you remove it. Don't use old sheets, they soak up the water and a) become so heavy that they are likely to squash or snap the plant, and b) long-term dampness is another way to invite mould and fungus onto your precious plant.

Second tip, use old pegs to hold it in place. Much better than trying to get loops of string to stay in place.

Third tip, try to leave the very top of the bundle open so that the air and the sun can get in freely. This helps to reduce the amount of insects who creep inside!

Here's one I did last week: 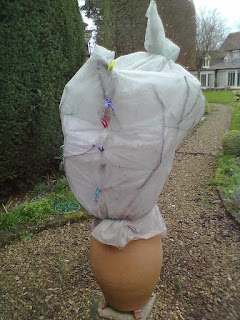 It's a fig, and as the branches are quite flexible I have been a bit cruel and have curled them gently upwards inside the wrapping, but only in order to make a neater package, as it is on the path. Next year I will have to do some judicious pruning, but I don't like to prune this late in the year.

You can see the cunning use of clothes pegs... and they are very handy when you are doing this sort of thing by yourself, without anyone else to hold the fleece in place while a force-9 gale tries to whip it out of your hands.

I then went on to wrap the pot - in bubble wrap, which is ok for pots, not for plants - which is mostly to protect the pot, rather than to protect the roots of the plant.


So, what do you get if you cross Santa with a duck?

A Christmas Quacker.
Posted by Rachel the Gardener at 09:07