Bramble Removal: invaders from next door.

My original article on Bramble removal: How To Do It is now getting very long and complex, with lots of questions and discussion, so I thought it was time to start a new one.

Mike asked about how to deal with a situation where you share a boundary with a bramble-infested patch.

This is a really difficult situation, whether it is "rough" land that no-one maintains, or whether it is a neighbour who refuses to do anything about their invading jungle.

Firstly, to clarify, brambles don't so much "destroy" fences, as invade over, under and through them: in this respect they're not quite as bad as ivy which forces a way in-between the slats/panels/bricks, then thickens up the shoots until the fence or wall is literally split apart.

Bramble are less damaging - they only live for 2 years (that is, each individual "cane" or "stem" only lives for 2 years: they last for years when dead, and there are new ones appearing every year) so they don't have the ability to squeeze through gaps then thicken up and destroy the fence.

However, they will reach their limbs over and grab at you as you pass: and of course they will be setting seed, ie blackberries, which passing birds will gleefully drop on your side of the fence, so you will have to be constantly alert for tiny seedlings.

In my experience, if you have brambles invading over or through a fence, the worst thing you can do is chop them off as soon as they get within reach.

Nearly all plants respond to chopping - or "pruning" as they see it - by sending lots of growth hormones to the cut stem and sending out a whole bunch of new stems from the damaged one.

This is how grass gets thicker, the more we cut it.

So if you cut a bramble stem, the cut end will branch out and grow several thinner stems, with huge energy, in a rather hydra-like way, so you will end up with an even worse problem.

The answer - and this is particularly appropriate and rather amusing with the "bad neighbour" scenario - is to tuck the new growth back to their side of the fence. If the stems are long and whippy, flick them back over the fence until they catch on their own lower growth. If they are short and stout, and have only just started encroaching, tuck them firmly back on themselves, behind the fence.

This works for ivy, as well.

That way, they continue to grow at the standard pace, as opposed to the "I've just had my tip eaten so forward, troops! Grow, quickly!" pace. And they are growing on their side, not your side.

If they are coming through gaps in a slatted wooden panel fence, what you need to do it to stuff them back through to the other side: cut them off so there is only about 4" on your side, double it over and push the cut end back through the same hole in the fence, then push the whole loop back until it pops out on their side.

I use my trusty daisy-grubber for this job, as it is thin enough to slide between fence slats without damaging them.

Often, you will find that by pushing the stem back, the fence slat will "pop" back into place, so you know you've done it correctly. The point of cutting the stem off to about 4" is only to make it easier for you to manage, by the way - and yes, I usually pop the offcuts back over to their side. *evil laugh*. Well, it's their plant...

So, what would I recommend for Mike's situation? The brambles from the green belt land next door are 8' high and invading: they destroyed an earlier fence, so the previous owners put up a wire fence, which is just about the least useful thing you can do with brambles, as it offers no resistance at all.  Mike would like a "green" solution, and asks if any hedging would be bramble-resistant.

Right, last point first: No. No hedging will put up the slightest resistance to brambles: brambles will go straight through anything you plant, and will in fact enjoy the protection of the hedging, as it will be impossible for you to keep them at bay.

"Green" solution: access the land from the other side, then invest a bit of time to go round there with a machete and chop back a strip of brambles 3-4' from your boundary. If you can't get round from the other side, lean over your wire fence far enough to clear a foot or so beyond the fence, and once you have enough room to work, you can clamber over and work your way all along the other side of your fence.

Cut off the top growth and get rid of it (naughty suggestion: toss it further back into the green belt land. If no-one is watching) then go back over the strip and cut every stem down to just below ground level.  Why? read on....  This would create an exclusion zone keeping them off your fence: if you made a gate or opening in your fence, you could mow along this strip once a month or so, all year round, to cut off the regrowth. Aha, now you see why I said cut them to soil level - so you don't spoil your mower.

If you don't want to mow, you will have to spend more time and energy in digging out the roots, as per the other bramble post, so you might prefer to accept that they are going to regrow, and run the mower over them as often as is needed.

The benefits of the exclusion zone are:

It gets the brambles off your boundary, so you can put up whatever type of fence you want.

Disadvantages: depending on who uses the green belt land, it might remove a superb anti-burglar barrier.

Once you have done it, you can plant a hedge on your side so you don't have to look at the ugly wire fence and the backdrop of brambles: but on the other hand, once you have controlled them, it might be nice to be able to see the flowers, and the bees, and the blackberries. Your choice.

Oh, I suppose I have to say it: once you have made an exclusion zone, you could, if you wished, lean over the back fence with a weedkiller spray a couple of times a year to keep it down. Please note that I am not recommending that, just saying it. *laughs*

I suppose that if it were my garden (bearing in mind I don't know how big it is) I would clear the exclusion zone, make a gateway at one side or the other, then plant a hedge in two overlapping parts; oh blow, I need to do a sketch, hold on: 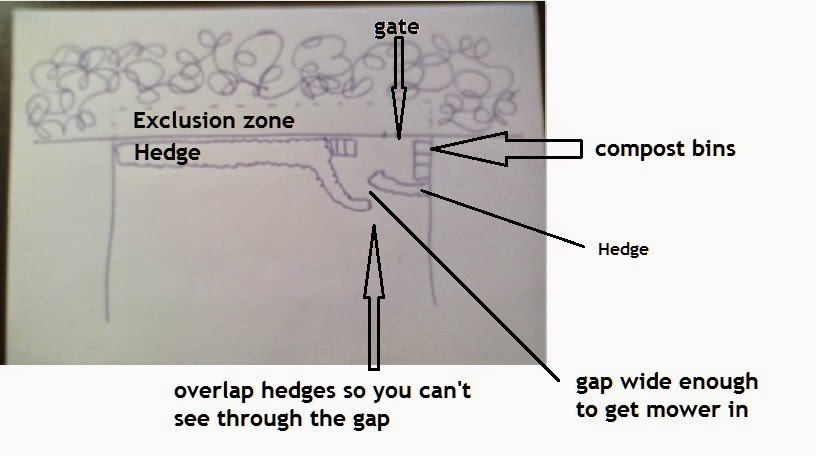 Hilarious, there you go, instant "back of an envelope" sketch, annotated.

So the hedge runs inside the fence, with one long section, overlapping a shorter section, which hides the gate, the compost bins, the leaf mould pens, the grass piles, or even a garden shed, who knows. The gate lets you get out to maintain the exclusion zone.

This works equally well if the land is at the end of the garden (which I have sort of assumed) or at the side. I would, if it were mine,  probably plant a couple of small ornamental trees within the hedge line to give a bit of height.  Talking of height, how high would I let the hedge grow? Hmmm, high enough to hide the brambles, I suppose.

What sort of hedge? If the idea is to hide an ugly view, I'd plant an evergreen hedge, something that flowers like an Escallonia would be lovely: or a Viburnum, again, you get flowers: or a variegated laurel, Aucuba japonica , which some people hate: I quite like the golden-variegated ones for a splash of colour, but they do tend to look the same all year round. Laurel can easily become a looming, overbearing presence but it's thick, glossy, can be cut back really hard if it gets away, and hides things all year round.

Or even Beech: looks lovely in spring, pretty enough all through the summer and, if you keep it clipped and down to less than about 6', it will hold the dead leaves all over the winter, so it never goes really bare. Personally I'm less keen on looking at dead leaves all winter, but that's just my opinion.

So there you go, Mike, hope this has answered a few of your questions and has given you a few things to think about - and do let me know how it works out!

Posted by Rachel the Gardener at 10:12