Ground elder.. even saying the name makes me grind my teeth together.

If Gollum had lived in Oxfordshire, I am sure he would have been heard to say "ground elder - we hates it, my precious, we hates it."

I've written about removing ground elder before, but here it is again: I was recently asked to retrieve a bed which had become completely infested with ground elder. 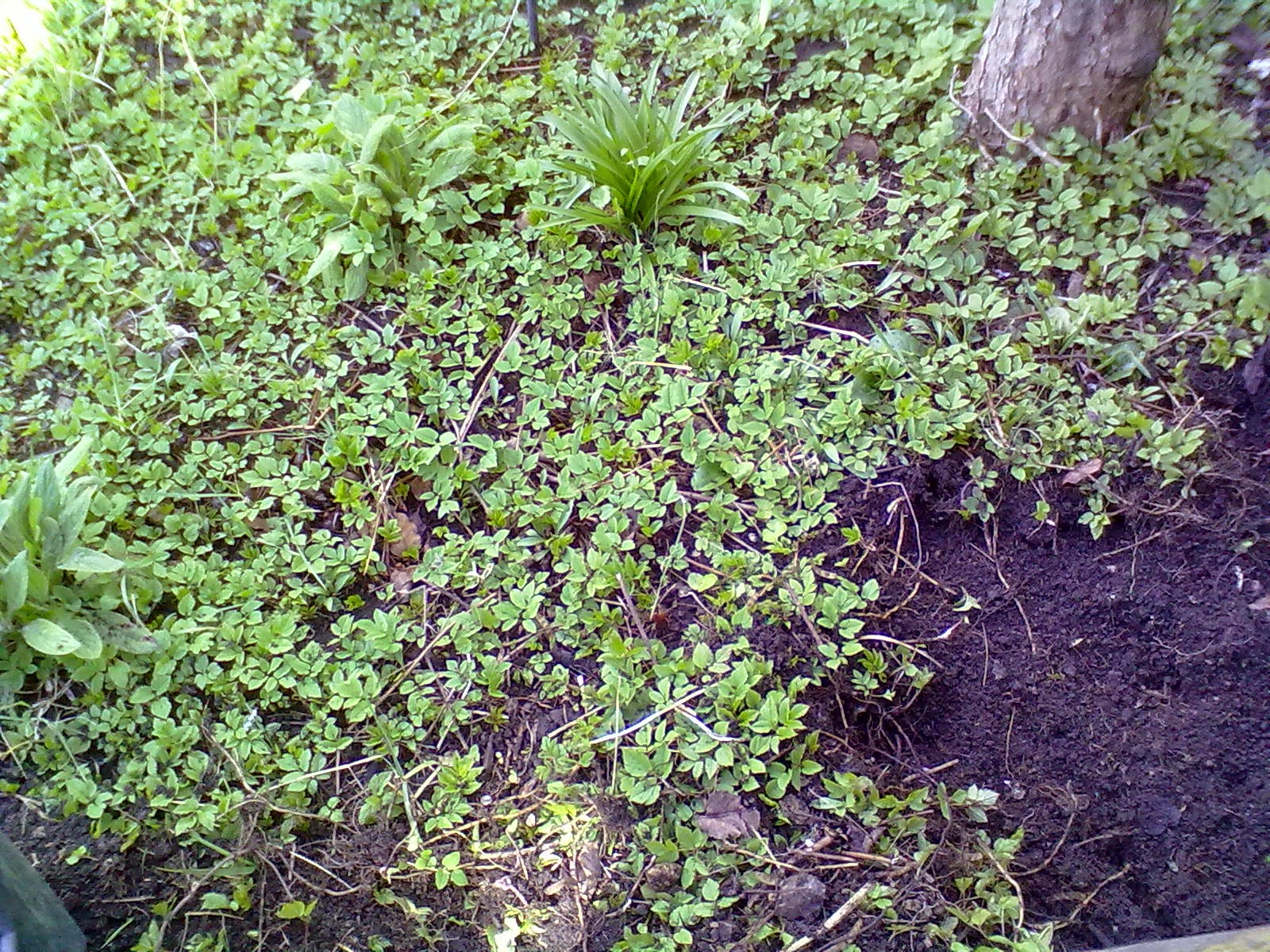 See? I am not exaggerating, it was completely infested. You can see where I have started digging it out, removing the top inch or two of soil.

How to deal with this situation?

Firstly, ask the Client if there are any precious plants in the bed.

Not surprising, eh? They will have been completely swamped by the ground elder. 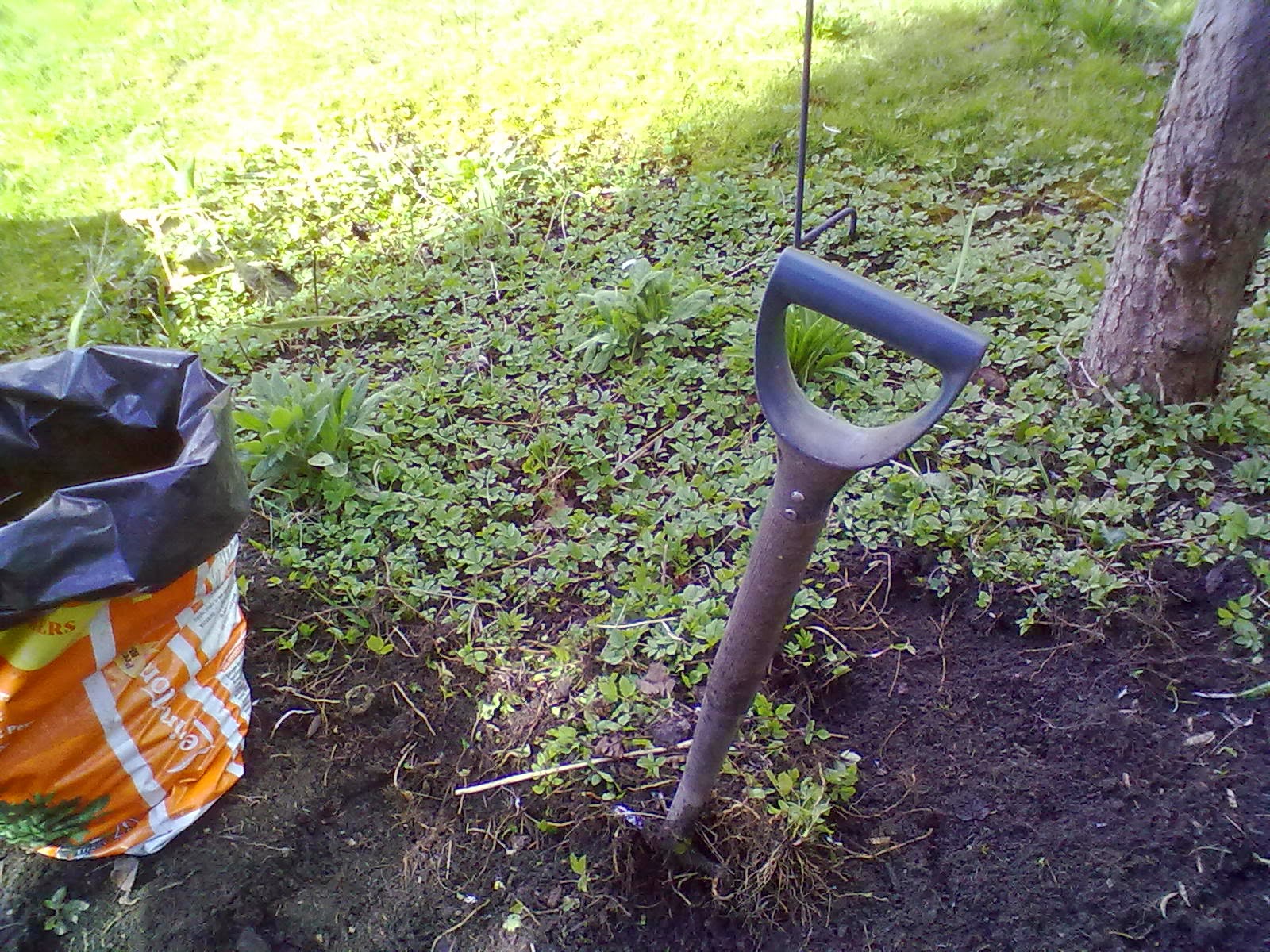 In this case, the answer was that there were some Peonies there, once upon a time, and would I please rescue them.

(Drat! Much easier to just dig over the whole thing!)

This entailed a hands-and-knees search for any sign of Peony buds, which revealed one tiny emerging bud.

So that was carefully dug up, all scraps of ground elder root were gently removed, and the Peony was set aside to be replanted later.

Then it was onward! Dig for victory!

I apologise that there is no easy answer to this one, you just have to Dig Once, Dig Twice, Dig Thrice.

Dig Once - dig out as much of the rotten stuff as you can. My technique is to insert the fork and lever it about halfway up, but not so far as to start tearing the roots. Then remove it, and reinsert a couple of inches away, and repeat. By loosening the soil in all directions,  you will find that you when you go back to the beginning and lift a forkful, the roots will "run" out of the loose soil, so  you get great long streamers of roots, instead of constantly breaking them off.

This is weirdly satisfying, in a funny sort of way.

Dig Twice - having gone over the entire patch as above, go over it again, this time methodically, starting in one corner and working your way across and back. This time, dig in the fork, lever it up, and "bounce" the soil on the prongs of the fork. A surprising quantity of ground elder roots will then appear, as the soil is jiggled off of them.

As an aside, I have still not decided if it is better to dig from the back to the front, which means that you are treading on the bits you are about to dig, thus compressing the soil and making it harder to dig - or should you start at the front, which means easier digging, but once you have finished, you have to go over the whole thing again to dig over your footprints?  I have no answer to this conundrum, and would welcome all comments on the subject.

Having done that, you then have to Dig Thrice to get all the bits you missed.

Trust me, if you were to go over it a fourth time, you would still find bits of roots, but you have to draw the line somewhere, and I think three times is enough, if you do it thoroughly each time.  There will, inevitably, be some re-growth of the weed, whether it is ground elder, bindweed, or couch grass (all three require the same regime to remove them) but at least any regrowth will be from short, isolated pieces of root, which will be easy to remove as soon as they sprout leaves, as they don't have the massive interconnected root system of the original infestation.

I should add, at this point, that if your weed-infested bed has plants in it that are worth saving, you should put them aside - I usually spread out a large piece of plastic to protect the lawn, and toss any possible savings onto it - and at the end, go back and sort through them. Shake off as much soil as you can, and gently pull the weed roots through and out. Again, this applies to the Big Three of weeds: ground elder, bindweed and couch grass. If a clump is so badly infested that  you can't easily get the weed roots out, then bin it. There is no point spending half an hour trying to winkle out the weeds, then planting it, only to find that a fortnight later it is an island of weed in your lovely clear bed. Don't waste your time, bin it. If something is particularly precious, dabble it in a bucket of water to wash all the soil off, then try again to pull the weed roots through and out.

If all else fails, and you really, really want to save the plant, pot it up and give it a couple of weeks to see if it is "clean" before you replant it. Or, if it is a herbaceous perennial, try splitting it up into several smaller plants: by breaking up the rootball you may be able to extract the weed roots. In all cases, don't just yank at them until the snap, that will do no good at all - you have to be able to pull them gently all the way through and out.

I should also, at this point, remind you not to attempt to compost the weed roots you have removed, or the rootballs of any perennials that have proved to be unworthy of saving. Don't compost them! If you do, you will end up with a compost heap full of weeds!! Burn them, or put them into your Green Waste bin where they will go off to the local Council waste treatment site, where they will be composted at a heat which is sufficient to kill them. If you don't have a Green Waste bin or a bonfire, the only option is to spread the infested material out on plastic sheets and leave it in the sun to dry for a couple of weeks, to ensure it is really dead, before you compost it. And even then, I would recommend putting it in a separate compost bin, so that if it is not dead, at least it won't have contaminated your main compost bins. 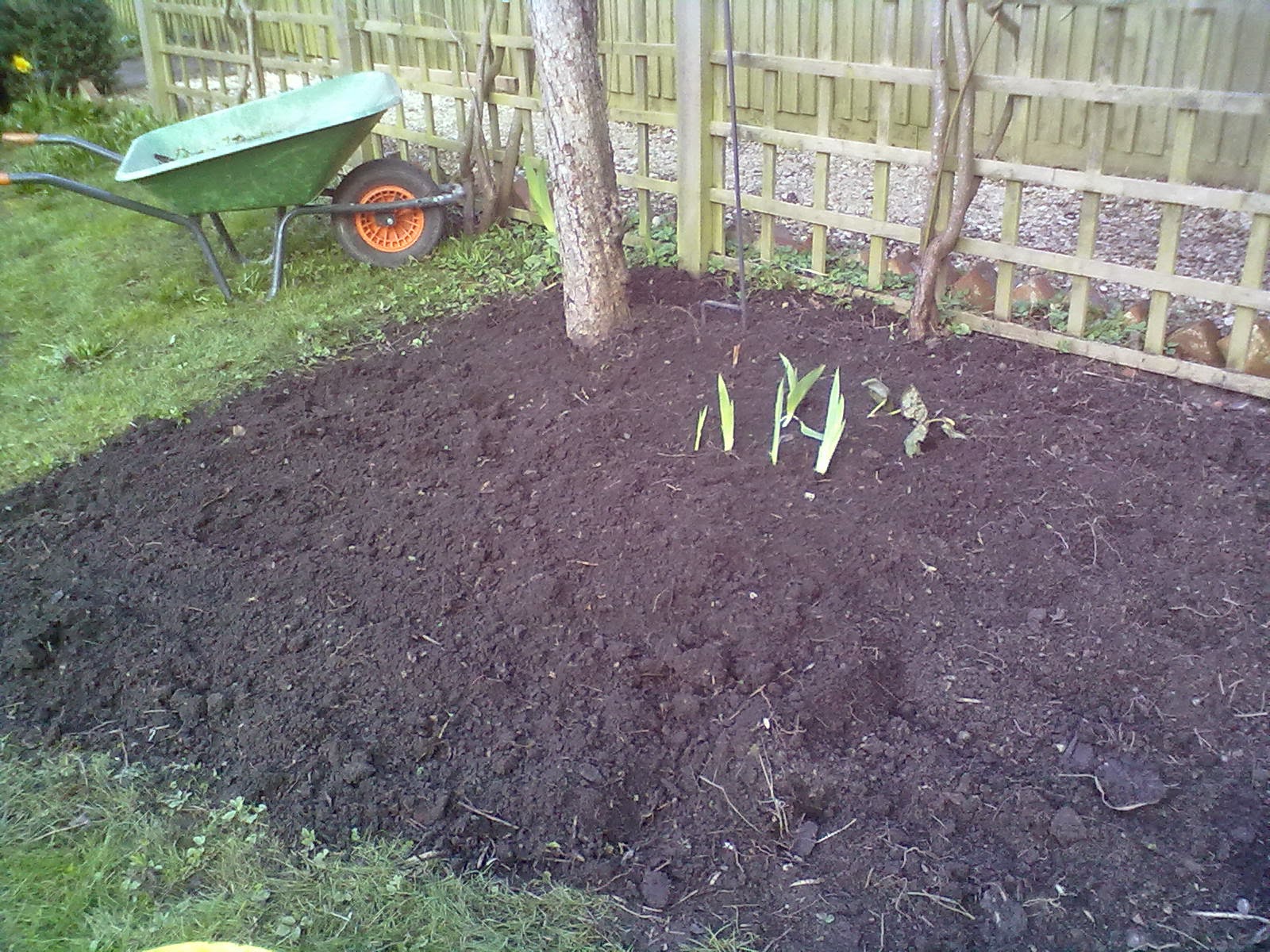 And here it is, all dug over thrice, with a handful of rescued Iris heeled in roughly to keep them alive for now, with the Peony scraps as well.

Hopefully the Client will remember to keep them watered for a couple of weeks... I always suggest, as mentioned above,  leaving a newly-cleared bed for at least a fortnight, to give those roots a chance to show themselves before we replant the bed.

It is then very easy to lift out any tiny scraps that have the nerve to re-grow. 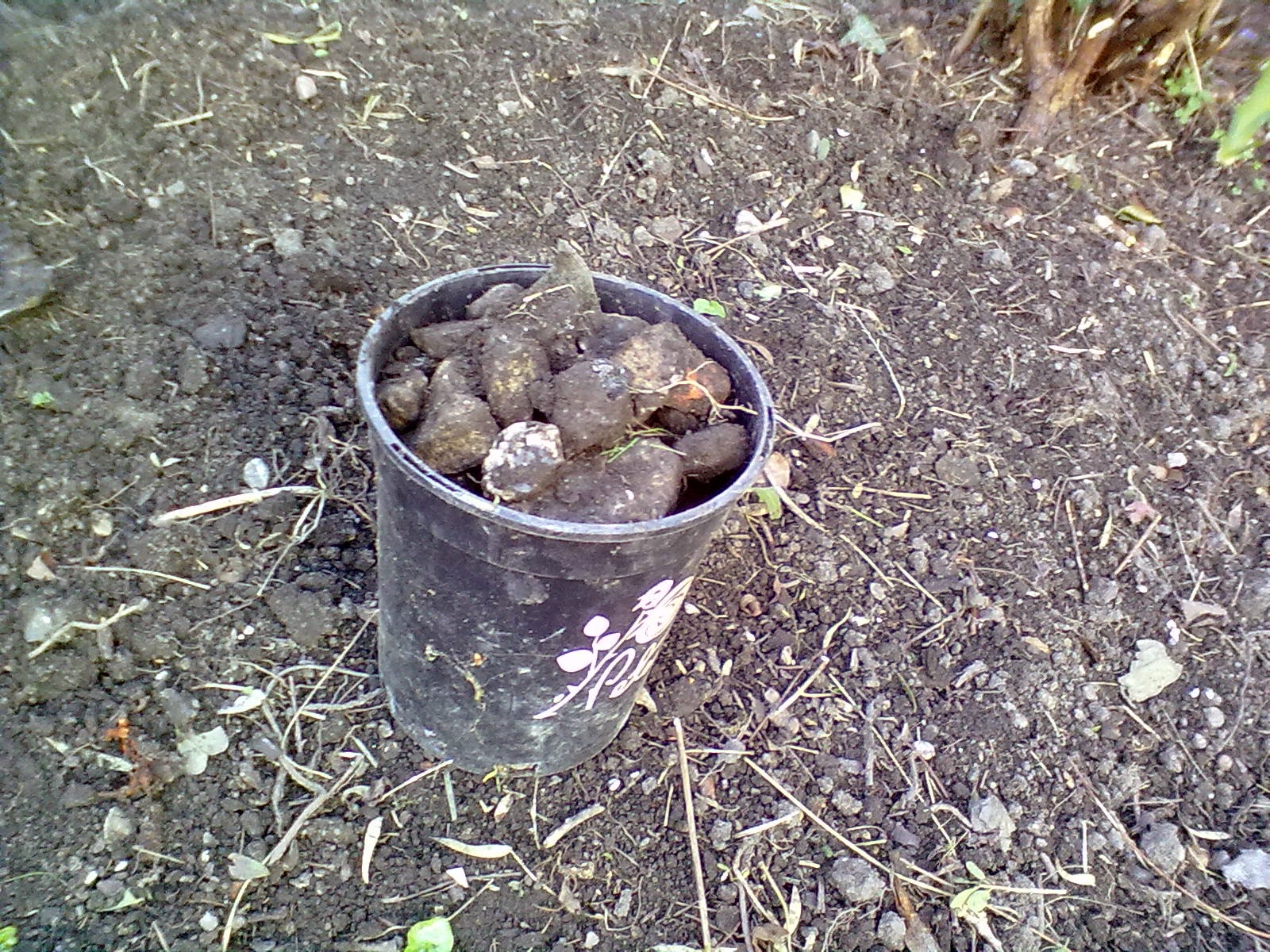 In this particular bed, I found a considerable quantity of rocks, crocks and broken glass: apparently that bed was used by former occupants of the house as a rubbish dump, and all sorts of bits keep turning up in the soil.

It's amazing to think that only a generation or two ago, householders thought it was perfectly acceptable to throw out broken crockery and bottles, tins and old bits of metal, simply into a heap in the garden.

I can only assume that they weren't trying to grow anything on this side of the garden, at that time. The reason for collecting this rubbish in a bucket, by the way, is that the Client asked me to keep all "findings" aside for them to check through, as they display all interesting bits and pieces. Sure enough, there was quite a lot of what is called contemporary glass and crocks - as always, lots of blue and white "willow pattern", some rather 50s-looking dark cerise pottery with gold banding, probably a coffee cup, and some rather lovely green-on-white transfer printed crockery. Oh, and an enormous old key!

The best items were added to the display, and the rest went off to landfill: the weeds went off to the bonfire heap, and the Client announced it was time for a cup of tea after all that hard work. As for me, I finished off the border, tidied up a couple of shrubs and headed home for my own tea...

Posted by Rachel the Gardener at 17:06