April: time to Cut Back the Cornus.

Here's what we have today: a lovely red-stemmed Dogwood (Cornus alba 'Sibirica').  We've enjoyed the red stems all winter, and now it is just starting to leaf up. 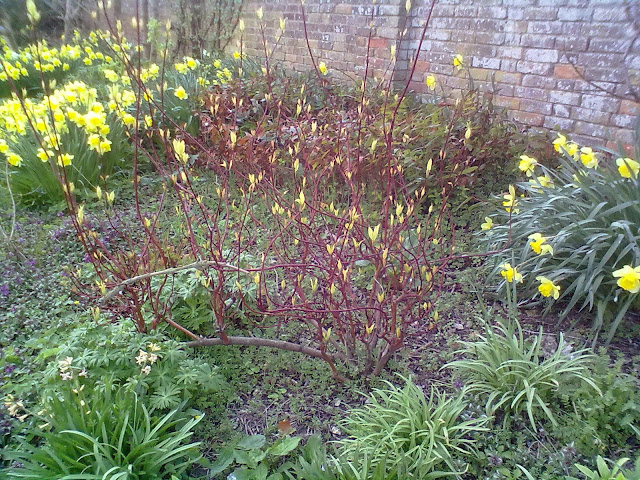 In order to get a similarly lovely display next year, we have to prune it now: I know it seems wrong, but if left un-pruned, Cornus will thicken into a small tree, and it is the new growth which has the brightest and best colour.

After all, we grow it for the winter colour.

Here we are ten minutes later - every single upright red stem has been reduced down to the bottom-most set of buds: 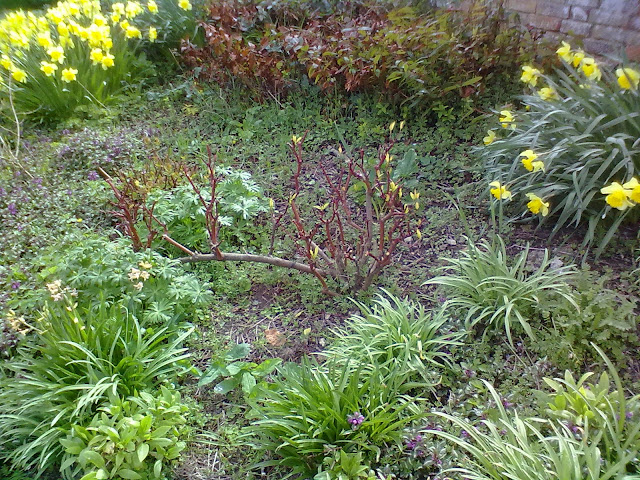 Yes, I know it looks drastic, but every stem which was cut will now sprout at least two new stems, they will grow upright and straight, and they will have lovely bright colouring next winter.

Trust me! I'm a professional!

I would further enhance this particular specimen by clearning the weeds and rough growth from around the base of it, giving it a good mulch of our own compost, and possibly a liquid feed of something like Gromore, to encourage it.

By next winter, it will be a thicker mass of strong, upright growth.

If you have left yours too long, and it has turned into a horrible gnarled brown-stemmed looming shrub, fear not, there is a way to deal with it. I should warn you that this technique is not for the faint-hearted, but I have done it dozens of times in various gardens, with consistently good results.

Step 1: get your loppers, and chop everything down to ankle height.  Go on, chop it all down.  Here's one that I did two years ago, it was taller than me and really not pretty at all. 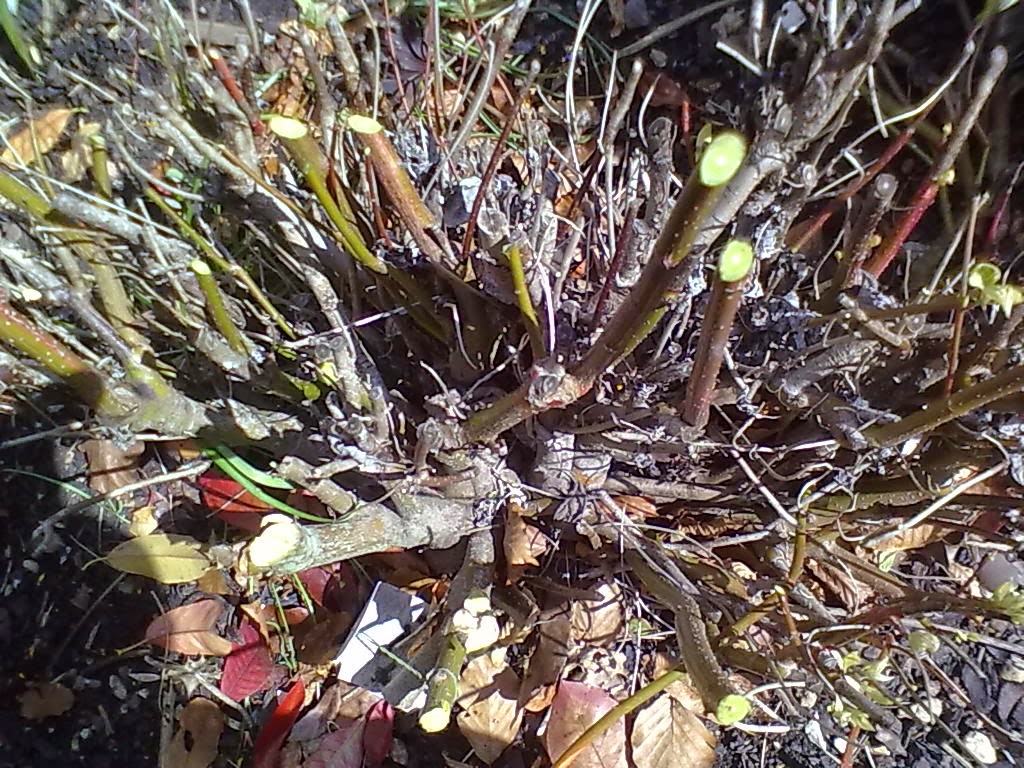 After fifteen minutes of really hard work, I had worked my way in through the thicket of branches, and had cut everything down to quite literally ankle height.

As you can see, few of the stems were red, most of them were dull brown, or dull green, which is such a waste.

"It was lovely for the first couple of years," sighed the Client. 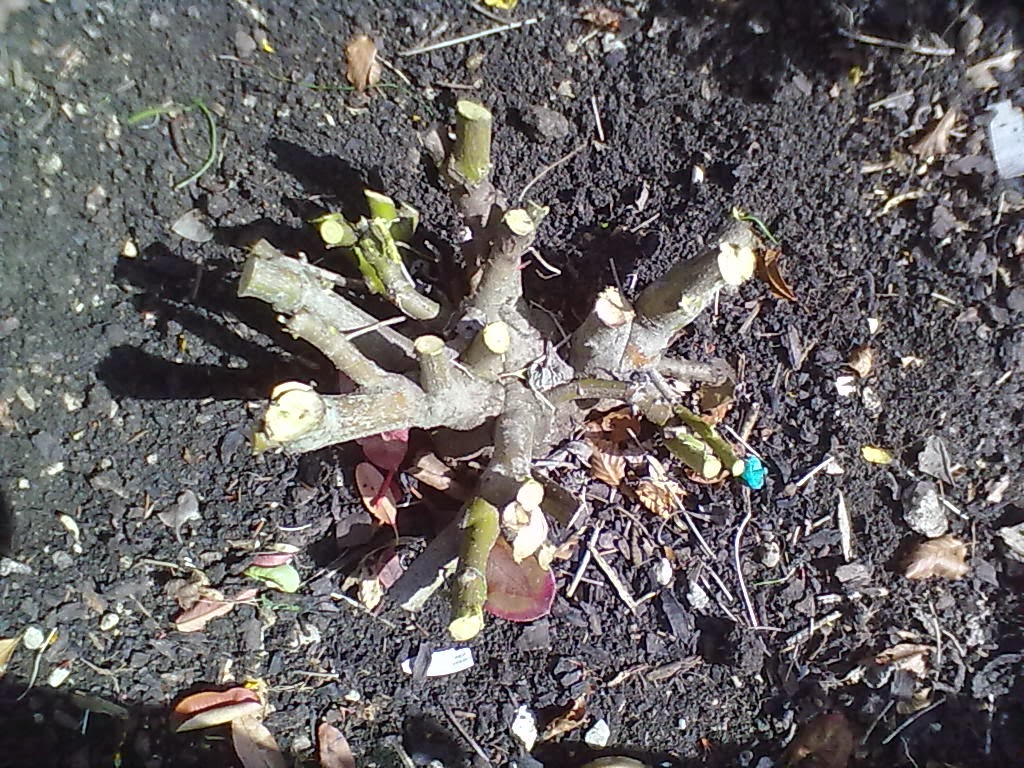 Having cut all the stems off, the job was not done:  a lot of the stems inside the base were dead, so the next job was to cut all the dead stuff off, as close to the base as I could.

I also removed all the lowest branches, the ones projecting at ground level, parallel to the ground.

We want branches to grow upwards, not outwards, so my aim was to clear the bottom layer. This also helps prevent the shrub from spreading itself around too far.

There we are, job done: brutal, are you thinking?

Are you concerned that there is hardly anything of it left, and that there will only be twelve new branches, at most? 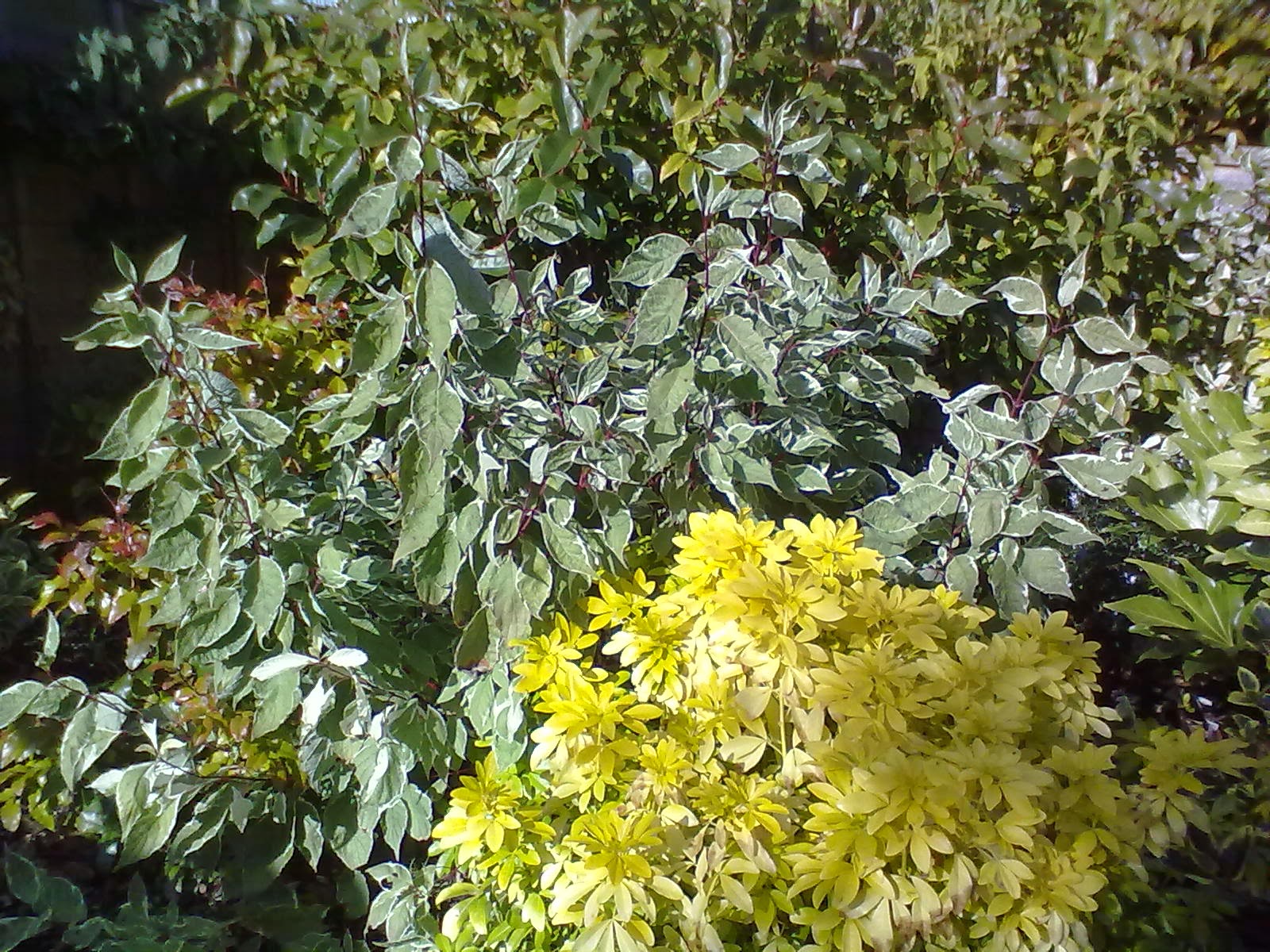 Here is the self-same shrub later that same year,

As you can see, it's fully recovered, it is bushy, leafy, it is no longer squashing the poor little Choisyia in front, and everyone is much happier, including the Client.

When winter arrives, all those stems will be revealed in their bright red beauty.

And, of course, next April the Client will know what to do!
Posted by Rachel the Gardener at 10:35