September is about the last chance you get to clip Box hedges: any later than mid-September and there is a risk that the new growth won't have time to "harden" before the first frosts of winter, resulting in a veneer of dead brown growth over the winter.

This hedge, the Bird Statue Bed, missed being done in August,  so last month (September) was my last chance to get at it before the winter.

Unfortunately, the Hydrangea arborescens 'Annabelle' growing within the hedge has been magnificent this year, and has totally taken over, as you can see: 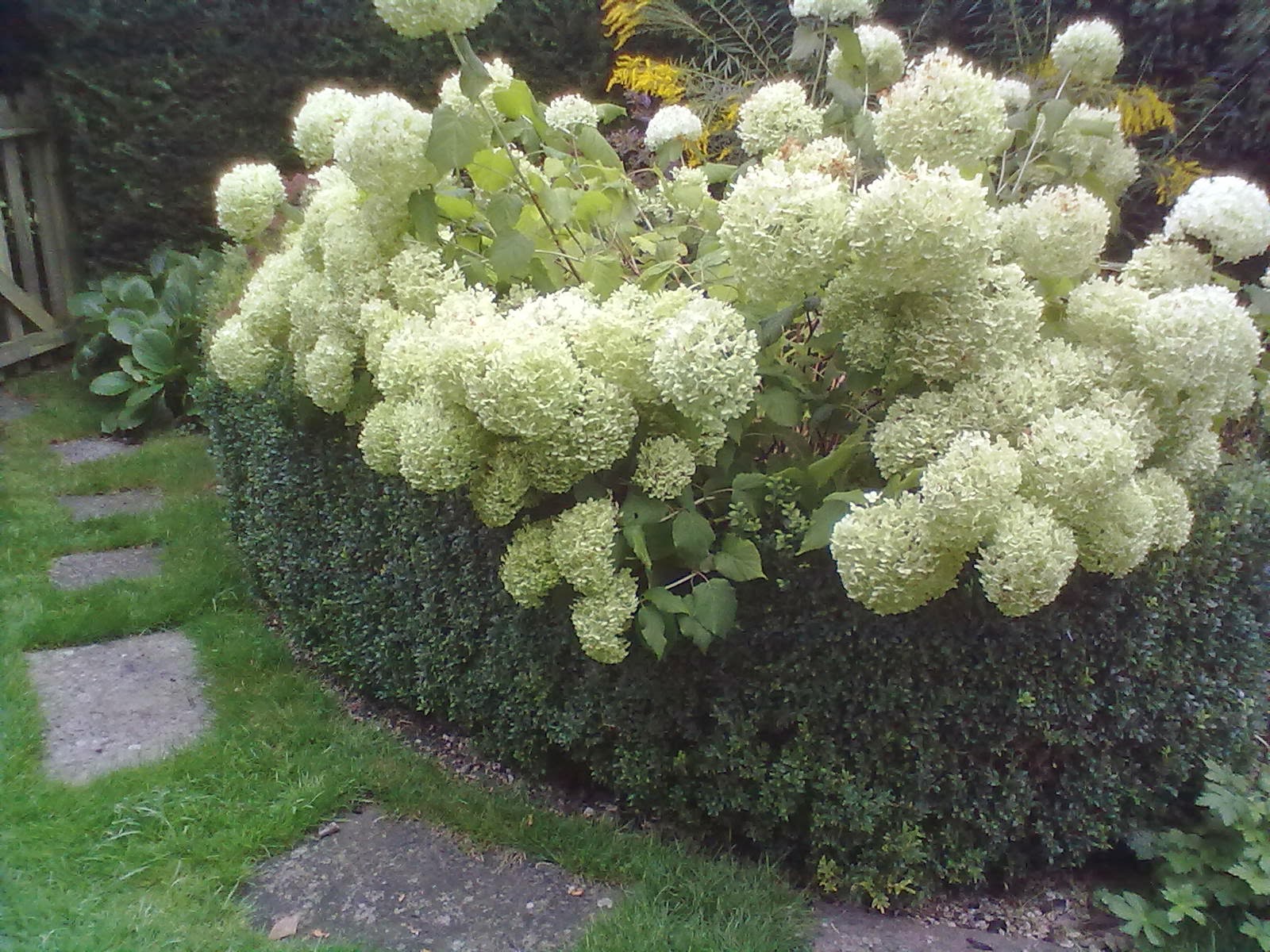 Glorious, isn't it? One of my favourite Hydrangeas, and very easy to grow and maintain, you just chop it down early in the year and up it pops. However, it can get a bit exuberant, which explains why this hedge didn't get cut along with all the others. 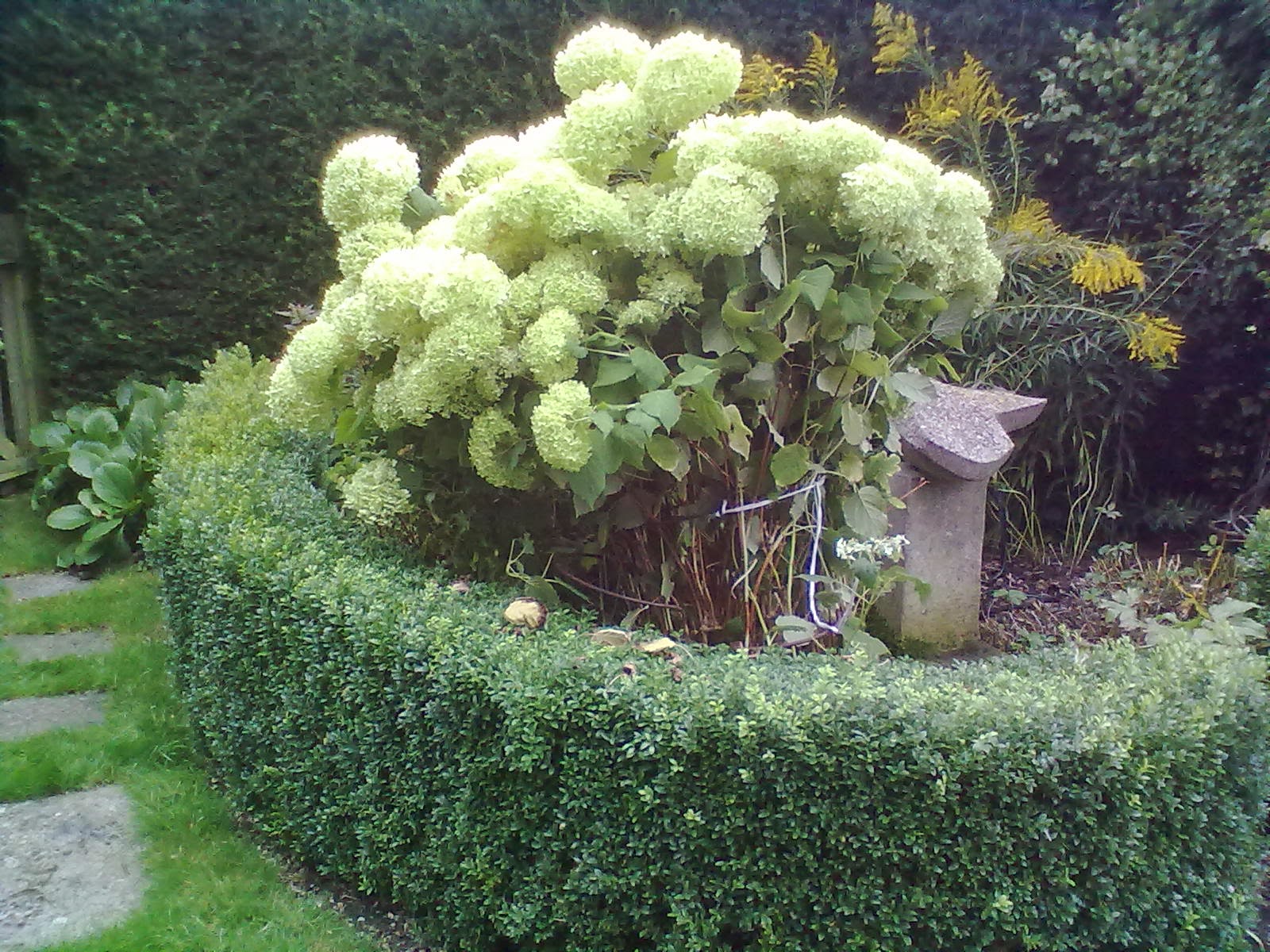 First job in this case was to tie up dear Annabelle, safely out of the way:

A long length of stout cord is the easy answer,  just run it around the bush and gently pull it tight.

If your shrub fights back, or is very floppy, you can use two lengths of cord and do it in installments, getting higher and tighter each time until you have made enough space to work. 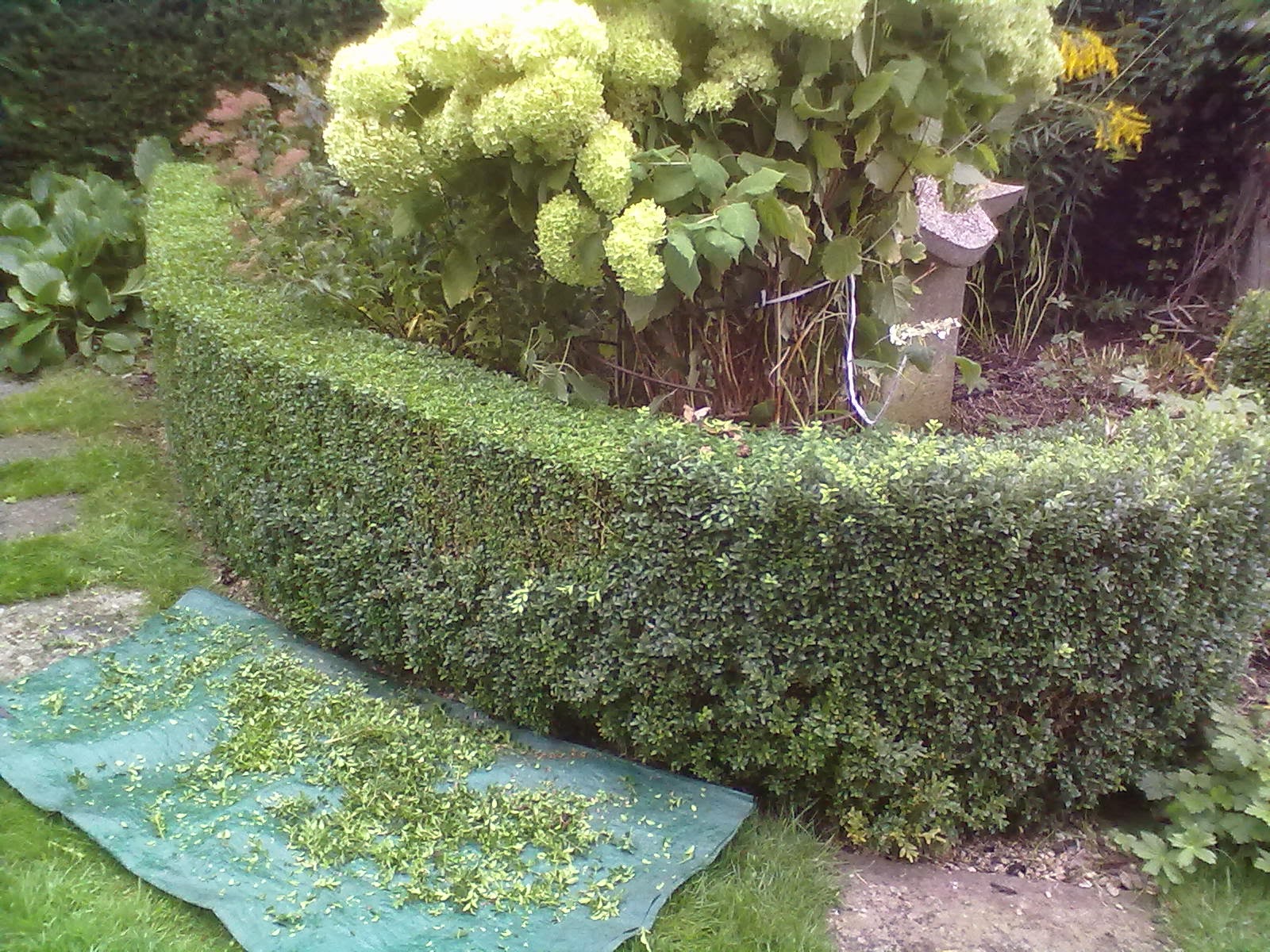 Here we are half-way done: as usual, I put down a plastic sheet to catch the worst of the clippings.

That's where I've got to in this photo: I then climb over again, and do the bottom of the outside face.

The reason for this complicated-sounding regime is that you can't hold the shears flat against the hedge for more than the depth of the blade, if you are leaning over.  And I find that I get a better edge from leaning over, than from doing the face that is facing me, if you see what I mean. Once the top foot or so is clipped, it provides a "line" to cut to, making it easier to maintain the original size and proportion of the hedge. 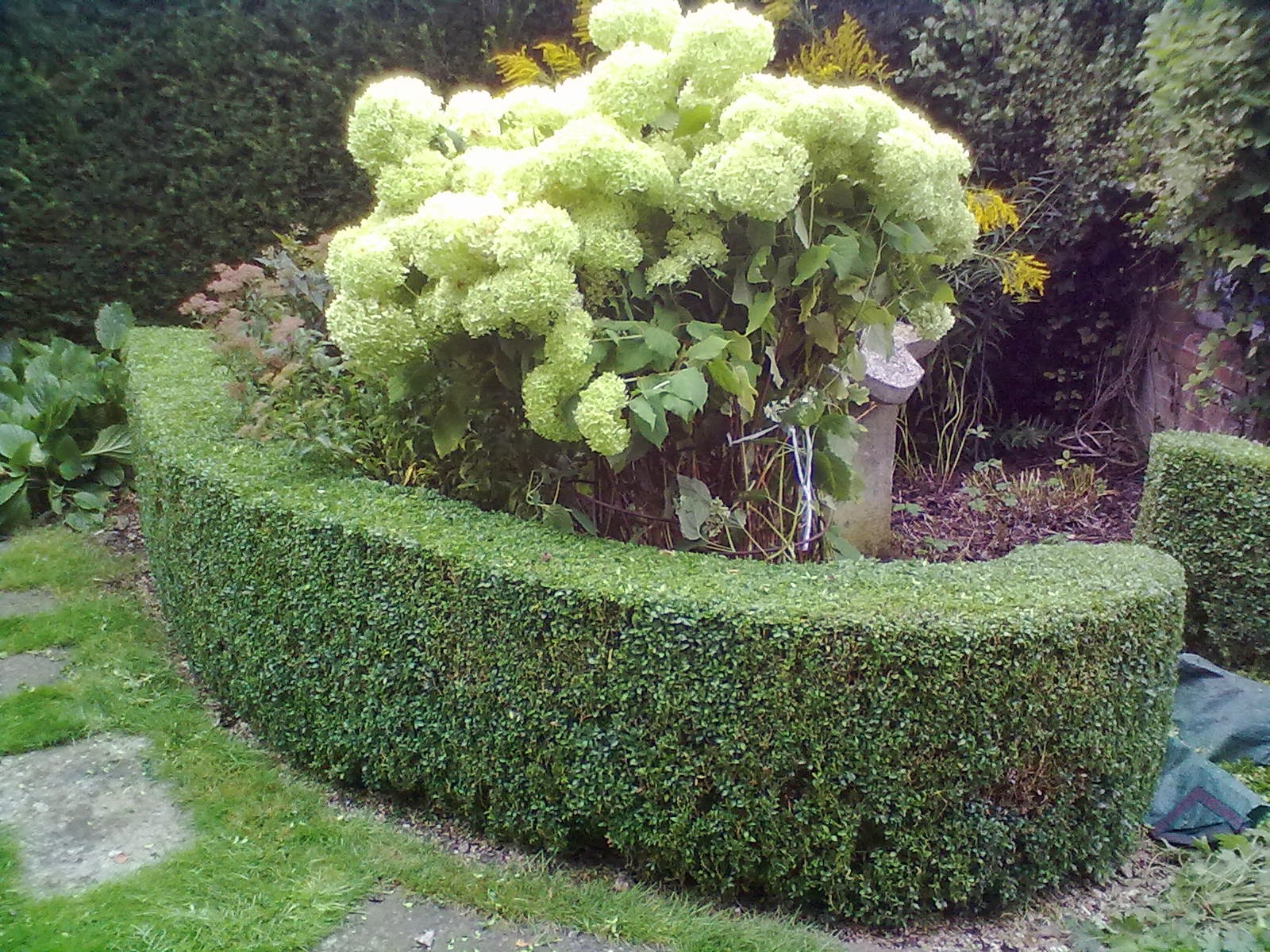 There we go, nearly done: 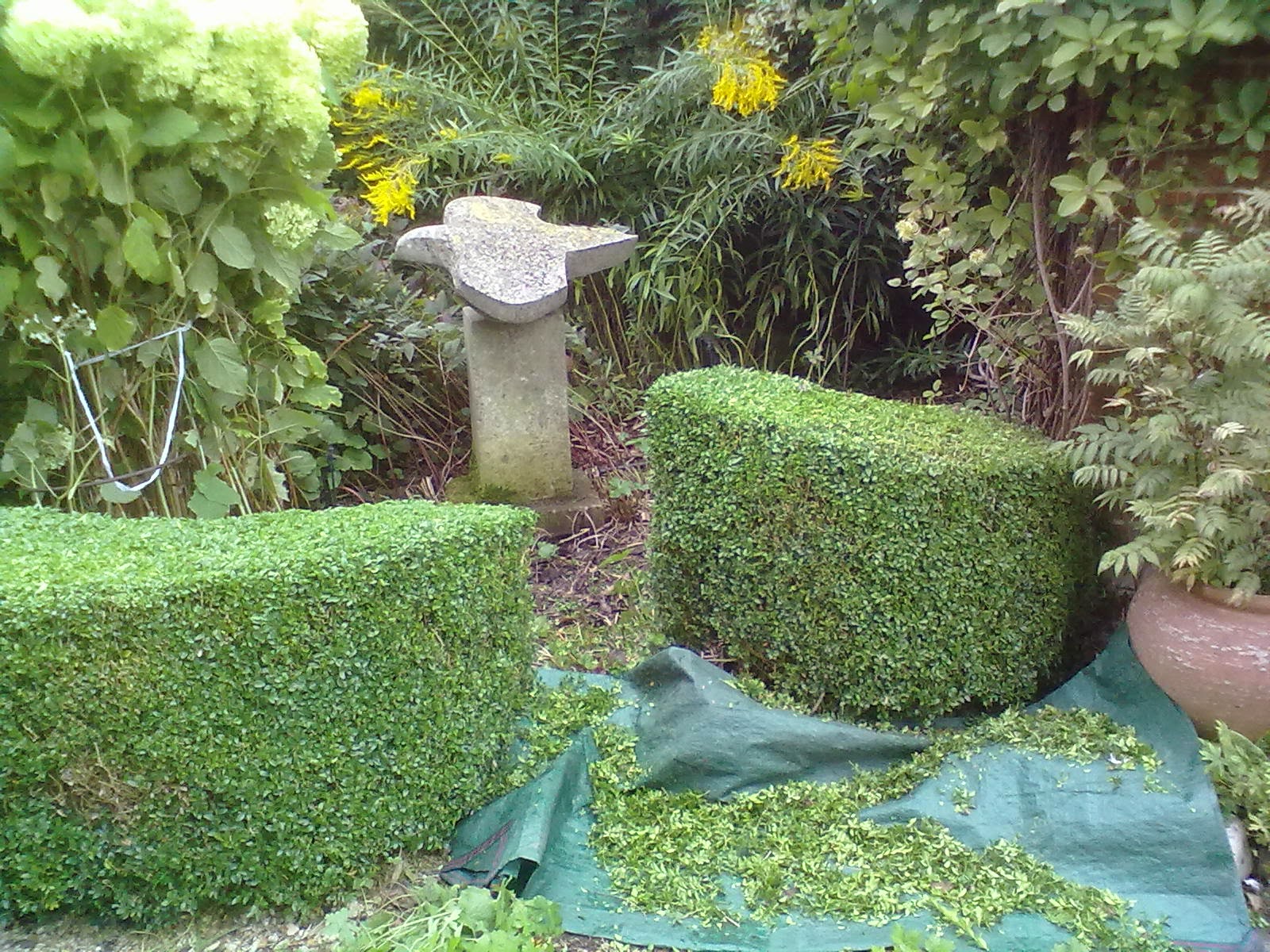 Now I just have to repeat the process on the other arm of the hedge, which is complicated by having an Akebia and a Clematis growing through it.

This means having to be very careful not to chop any of their stems accidentally!

I use the shears up until the last couple of inches, then I use secateurs, carefully holding back the stems with my other hand. 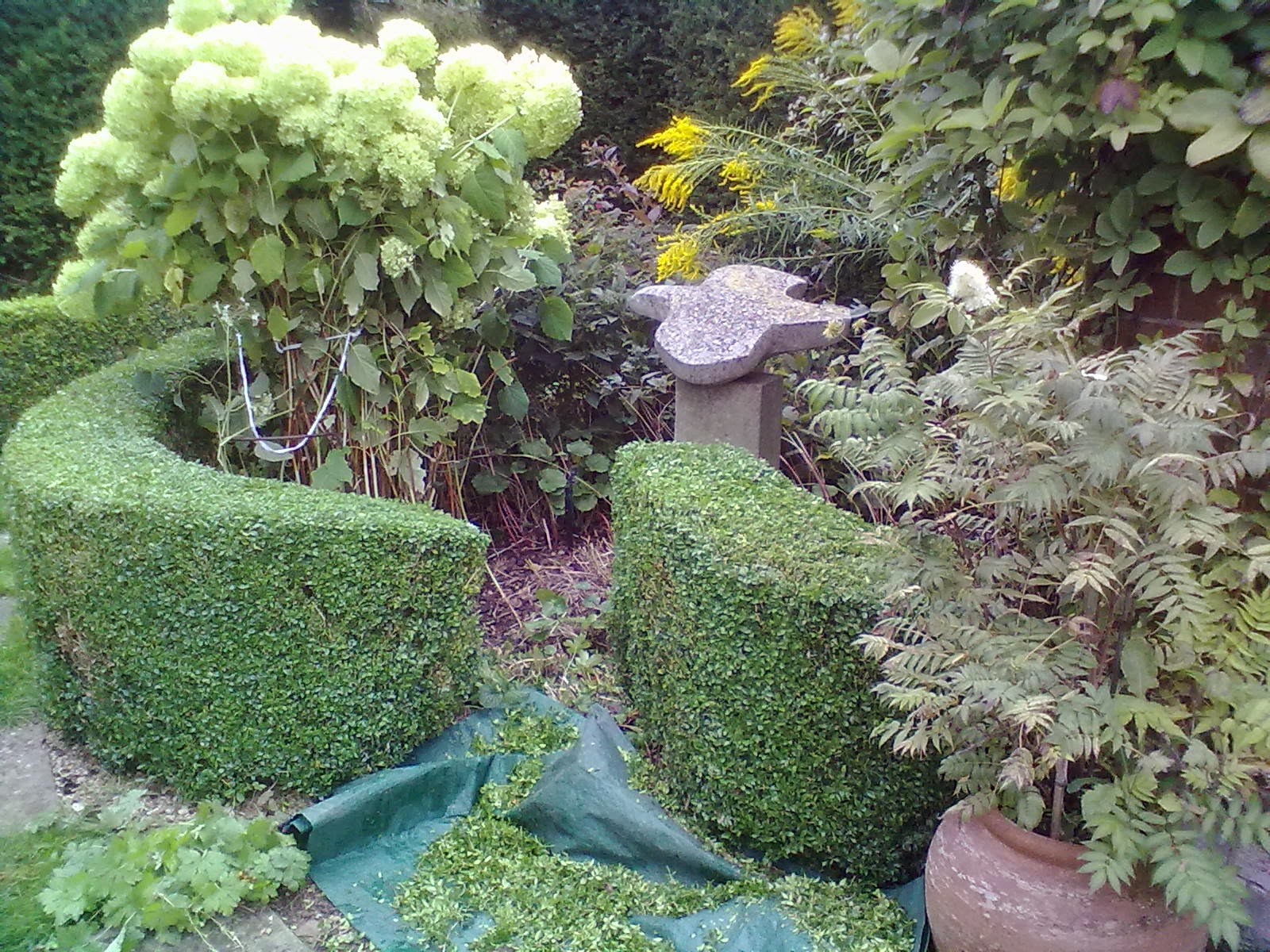 This particular hedge used to be level all the way across, but the Client wanted them to intersect at an interesting and artistic angle, so I have gradually been cutting the left-hand one down, and the right-hand one up (if you see what I mean) until they now form what always looks to me rather like the arms of the alien spaceship in the film Alien... I don't think my Client has seen the film, luckily. 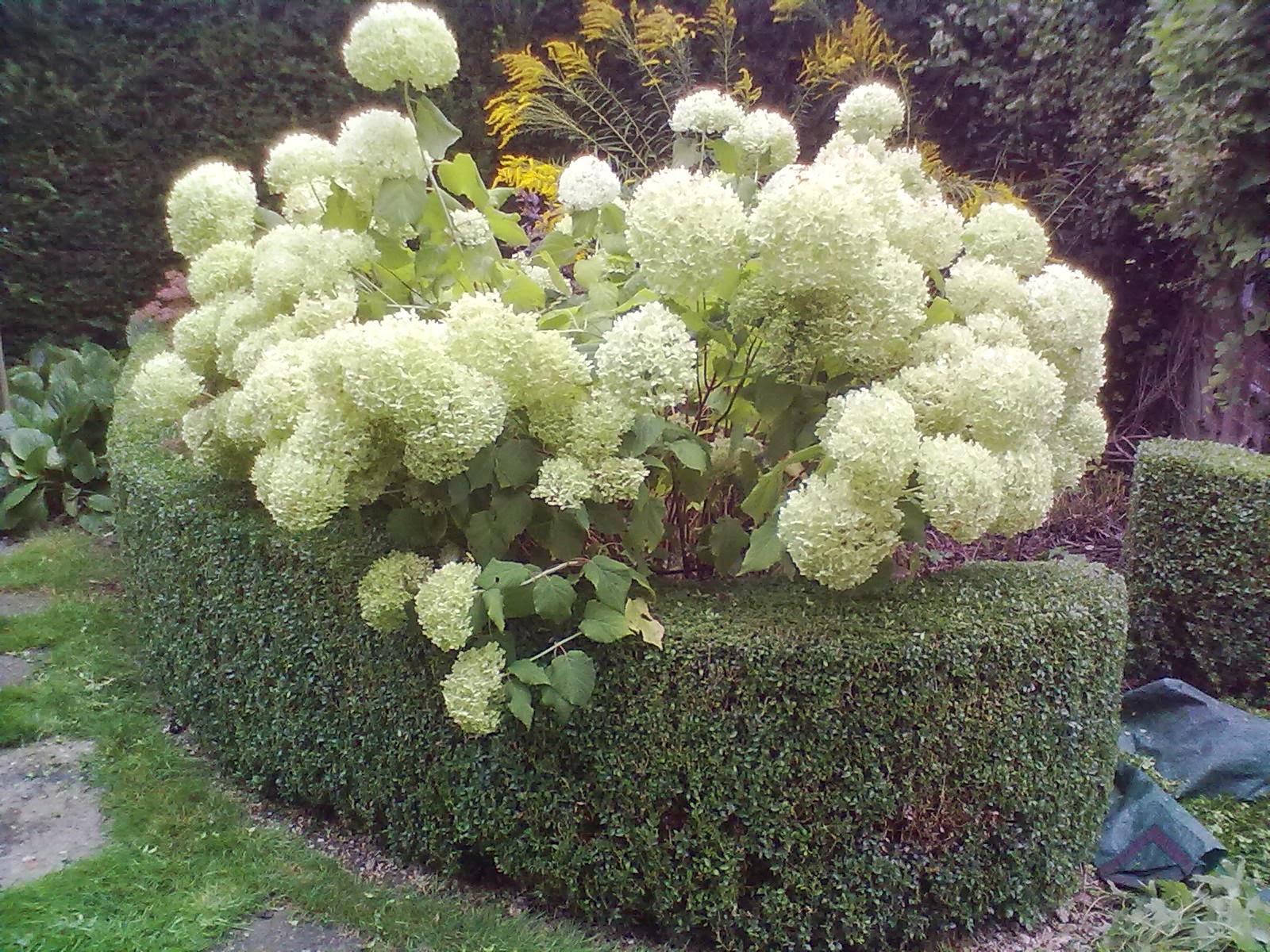 Final job, after clearing away the clippings, is to gently release the cords and allow Annabelle to flop over the hedge again.

Oh, not quite the last job: having shocked the plants by cutting them, it's only kind to give them a feed, usually of Growmore or pelleted chicked manure, and a quick slosh of extra water, so that they will quickly produce the flush of new growth which inevitably follows pruning. This gives it time to harden up before we get the first frosts of autumn.

And now the hedges should stay tolerably neat and tidy right through the winter.
Posted by Rachel the Gardener at 09:19