My local garden centre were selling these recently: handy-looking garden scoops made by Garland.

Comes in a range of colours, I chose blue for no particular reason other than it's a nice cheerful colour, and easy to find when I put it down somewhere.
I took it home, and put it to work scooping compost out of the big bags into a bucket, which then gets carried to the work bench for riddling before use.

It takes quite a few scoops to fill the bucket, as the scoop is not actually that big, but that's not a problem, as compost can be quite heavy if it is wet.

When I started riddling the compost, I noticed that my knuckle was bleeding. I'd used the scoop right-handed (it works equally well in either hand) and it was the side of the second joint of my first finger. 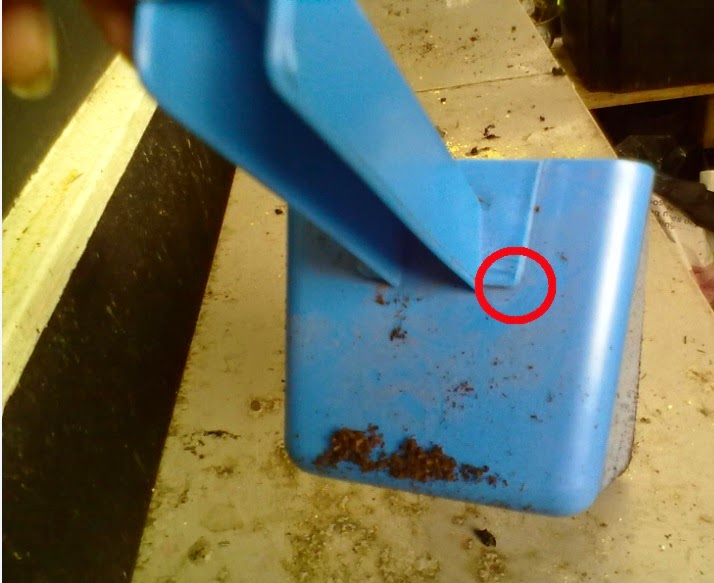 When I went back for a second bucket-full, ouch! I quickly found out where the bleeding had come from!

There is a sharp, sharp edge at the corner of the moulding around the base, ringed here in red.

When digging into springy, resistant compost, I found that the hand slips up the handle all the way, the knuckle then makes contact with this sharp edge and after a few scoops, blood!

So on balance, I would not recommend this scoop.

For the time being I have kept it: it hangs on the wall and is only used for lightweight scooping, and not very often. I feel sure that it will end up in the bin, as it is not earning its keep.

Meanwhile, back at the compost bag, I've gone back to using an old trowel to scoop out the compost. So glad I didn't throw it away.

Posted by Rachel the Gardener at 16:07