Why do people take very small children out garden visiting?  Have they no idea how annoying, intrusive, and downright unpleasant it is for the rest of us? Not to mention the careless damage done by  jumping around on flower beds, the dropping of sweet wrappers, and heedlessly picking flowers?

Last year, at West Green House in Hampshire, I was entranced by the sophisticated water garden. 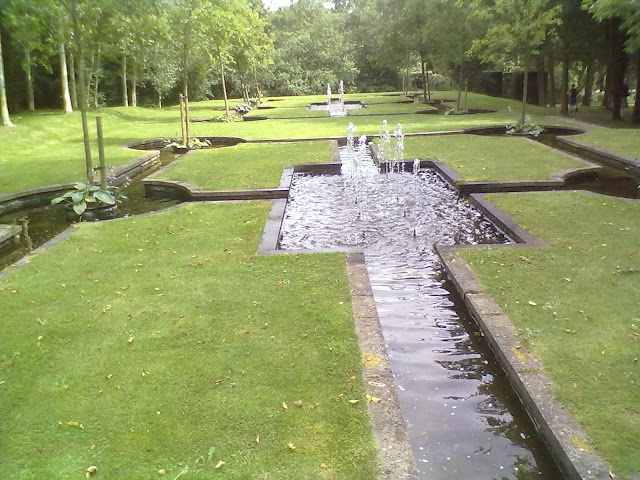 For oh, all of ten minutes, until two small children ran up, shrieking at full volume, and jumping repeatedly over the narrow canals. The parent, some distance away with a buggy, seemed completely oblivious that children can fall into water and drown ("if only…") quite apart from merely getting themselves soaked and ruining the car on the journey home. I mention those as perfectly valid reasons why this parent should have paid more attention, but what made me angry was the ruining of my peace, and enjoyment of the garden.

Who was more selfish? Me, for wanting the noisy children to go elsewhere? Or the parent, for letting her children ruin the visit not only for me, but for any other like-minded garden visitor?

I’m currently reading through old "Garden" magazines, and back in 2008 this point was raised by a couple whose visit to Sissinghurst had been ruined.

The following month’s edition carried two letters aggressively defending the children: one from the actual owner of the children, who said:

"I was incensed by the letter from… complaining of children racing around the paths.  Yes, we raced round…but we also admired the red garden and thought about how it made us feel. We smelled the flowers, learned how to identify roses, talked about bees and pollination and how to identify trees."

All of which could be done in their local park, without disturbing paying visitors, who may have travelled a long way to be there. The other letter started:

"What a shame that … have such an intolerant attitude to children in public gardens. When we visited Sissinghurst… my daughter played hopscotch by the herb garden, my son played in the tree holes by the pond and they all enjoyed lying in the meadow."

All of which could be done in their local park. She finished "We should be encouraged to see children enjoying outdoor spaces and using their imagination. Why should they be corralled into ready-made visitor attractions that cost the earth and restrict their creativity?"

I assume she meant theme parks, but if she’s concerned about cost, well, local parks are free.

In my opinion, there is no place for small children in garden visiting. The buggies clog up the paths, the shrieking is intolerable, and do they benefit from it?  I don’t think so. Small children can’t tell the difference between a common wild flower and some precious horticultural rarity.  I think they would benefit far more from being taken to their local park, or to open heathland where they really can run around and let off steam without any fear of damaging plants.

When expressing this view, I had one parent rather huffily ask me why she should give up garden visiting, which she loved, just because she had small children now. I told her that in my opinion, she should be prepared to put her hobby on the back burner for a couple of years, until her children are old enough to benefit from it. She didn’t seem to think that becoming a parent should change her life at all, which I thought demonstrated a staggering amount of selfishness. Had she never heard the expression "children change your life in every way" ?  That’s what it means - your hobbies, interests, activities all have to become secondary to your children. So take them to your local parks and open spaces - talk to them there, show them the trees there, let them play on the custom-designed equipment, not on expensive statuary, and although I hate to imply that public parks are horticulturally second-rate, let them pull apart the flowers there.

And leave the garden visiting to us entrance-fee-paying, appreciative, grown-ups.
Posted by Rachel the Gardener at 08:12