One of my Clients has a wildflower meadow, in what used to be a tennis court at the back of their formal garden.

It is a charming place - well hidden behind high Yew hedges on the house side, and shielded from the neighbours by good hedging on the other sides. As well as the wildflower meadow, it contains the bonfire heap, the compost heaps, a massive Black Walnut tree, several shrubs at odd places (just to break up the area, my Client says), the rhubarb bed and the raspberry bed.

So I spend quite a lot of time there, one way or another, but I don't do much actual gardening in it.

Two summers ago, I noticed some cow parsley was sneaking in to one end, presumably encroaching from one of the gardens on that side. My Client wasn't too worried, as it was frothy and quite attractive.

Last year, however, it was smothering the wildflowers, and the Client agreed that something had to be done.  We decided (I say that, when I mean "I suggested, and my Client agreed...") that this year, we would spray with weedkiller early in the season, hoping to catch the cow parsley before the wildflowers got going - if any were left, that is!

Of course, this year turned out to be the coldest, wettest, horrible-est winter on record, followed by a non-existent spring, with temperatures so low that there wasn't much point spraying. I finally managed to start spraying a couple of weeks ago, using Verdone, a lawn weedkiller, that won't kill any remaining grass, but should - allegedly - take out the broad-leafed weeds.

I had concerns about the Verdone killing the wildflowers, but found two points to reassure me that it was right to use it - firstly the wildflowers shouldn't appear until late spring/early summer, and secondly there were whole areas last year with no signs of wildflowers at all,  due to the smothering by the cow parsley.

On the worst areas - round the Walnut, for a start - where it was a sea of cow parsley, and nothing else,  I just sprayed the entire area, on the grounds that there were no wildflowers at all there. In other parts of the meadow, I tried to "spot spray" to just target the cow parsley.

Well, partially - it was clear that some of the cow parsley plants were suffering, as they were growing pale and contorted.

Diversion: in case you didn't know, most weedkillers these days are hormonal, they kill the plant by forcing it to "overgrow" and exhaust itself.  So instead of going brown and shrivelling up, they explode upwards in weird curly shapes, then collapse and die.The weedkillers that make plants go brown and shrivel up are defoliants - the paraquat types - which seem to have a really fast effect, but which usually don't kill the root, so if your problem involves weeds with long root systems (bindweed, couch grass, ground elder, the usual suspects) then it is only a short-term fix. End of diversion, please continue.

However, they were still flowering, which means that they will set seed, which means the problem will be multiplied next year, so I had to take further action.

Now, in the formal garden, I just weed out the cow parsley using my standard in-constant-use hand-tool, the Daisy Grubber, (for more info, read this article) which looks like this:

...and on days when the soil is slightly moist and soft, they come out really easily, in fact, they can sometimes just be pulled out, by hand.

But there are way, way too many of them in the meadow to do that - it would take me weeks to go over the whole area, and I have the formal garden to maintain as well.

So I have adopted a new tactic: pulling their heads off. (To be pronounced in a west country growl, "Purrll theirrrr bluuudddy 'eads orrrf!")

Here's the narrow strip between two of the mown paths: as you can see, mostly just meadow buttercup and a smattering of cow parsley: 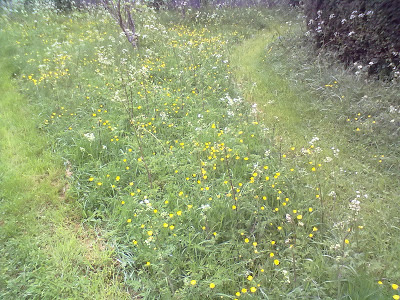 This is "after": all white umbrel heads removed. 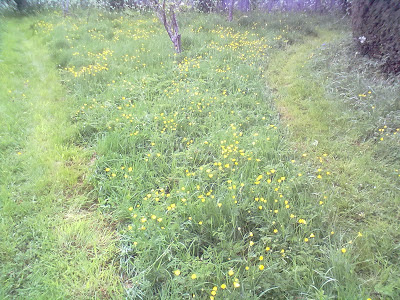 It took me about ten minutes, instantly improves the look of the area, and will reduce the amount of seeds produced.

My plan is to spend 10-20  minutes out there each week, doing the same, to keep this area completely clear, and to gradually work my way into the other sections.

Cow parsley - Anthriscus sylvestris - is a perennial, unfortunately, which means this is not a lasting solution, as the roots will regrow.

But, my plan is that a) it will drastically reduce the amount of seeding and b) next year, hopefully it won't be quite so cold for so long, so I will be able to get out there with the Verdone much earlier in the year.

I'll let you know how it progresses!
Posted by Rachel the Gardener at 12:01