Here's a  change from my usual "how to do it" posts: this time, How To Start a Box Hedge.

Two years ago, one of my Clients wanted a White Bed, so I cleared out a narrow, nothing-very-special bed along the house wall, and we planted it with white: a rose, a clematis, white-flowered heather, Allium neapolitanum,  tulips, Tradescantia "Innocence", and some hideous monstrous things whose name I can't remember, but which produced massive, smothering rosettes of coarse dark-green foliage for two years before finally producing very tall spikes of white (ish) flowers.

After the first season, we reassessed it, and decided that it was only moderately successful. I remembered reading somewhere that White gardens needed to have boundaries,  to contain the white: so I suggested we plant a low box hedge around the front edge.

In went two dozen little Box plants, bought from a local garden centre, and each only about 4" high. I spread them along the length of the bed, keeping three of them back as reserves, so they were initially about 6" apart.

They nearly all made it through their first winter, and the two casualties were replaced by two of my reserves.

That spring, we realised that although the rose was just about surviving, the clematis had not, so that came out, and we added some white anemone blanda and more tulips. The box plants continued to grow slowly, despite the efforts of the cats to dig them out: at one point I had a barrier of short canes, just to prevent excavation.

Later in the summer I gave them a very light clip, just trimming off the tops of any that had grown to more than 8", to keep them bushy.

This year, they were due for their first clip, as they had settled in well, and were putting on some good growth.

Here is the "before" picture - yes, amazing, I remembered!  The three pyramids of white are, incidentally, Honesty, which I provided to take the place of the coarse green sprawler, and which are paying dividends already. Oh, and yes, there are still some blue bluebells in there,  they just keep coming back every year, and I just keep on pulling them out... 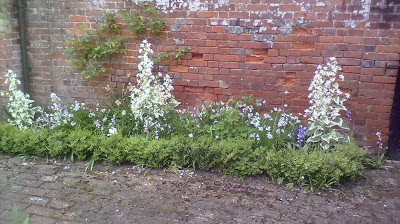 And here is After: 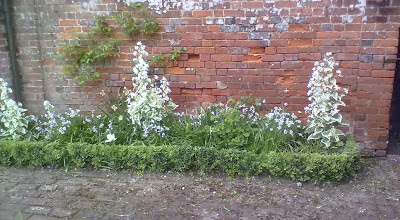 Not exactly what I would call a Topiary clip, just a rough clip of the top, to get them to an even height, and quite a lot off the inside and the outside, so that they expand widthwise but don't try to take over the bed or the path.

Most of the books recommend using canes and string to get a level for the top, but take my word for it, after you've cut through the string and had to re-join it half a dozen times, you learn the value of being able to do it by eye.

So I did it by eye, stood back and checked:  it's hard to get a good level on a new hedge, as there are gaps, it's not solid in the way that an established hedge is.  If you find this difficult, my answer is to take a short cane, cut it to length, and use it as a measure, by placing it along the path at intervals, and cutting the hedge at that point to the level of the cane. Then go back and join up the gaps, as it were.

Posted by Rachel the Gardener at 17:27