Dear old Brian - or Bryony, since the baby snail arrived - has been growing again, and on arrival this morning, I found a very fluffy snail: 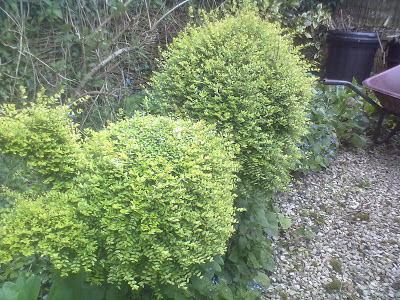 Hmm, time to do something about that.

First a general clip over the head and the main part of the body, using the trusty old shears, then out with the secateurs for a bit of close attention to the antennae: 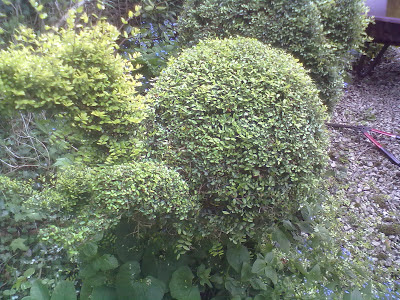 Can you tell which one I have done? *laughs* Of course you can! From this angle, he/she does look a bit like a woolly mammoth, but don't worry, it will get better. And - as always - it looks better in real life than it does in a camera-phone photo. 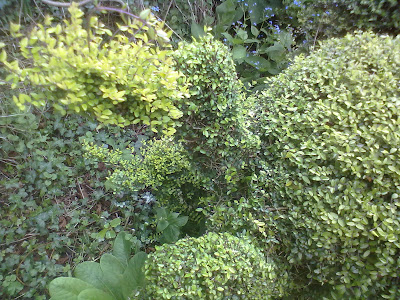 Here I am half-way through the second antennae, to show what a reduction in size it is.

As you can see, there is a lot of new growth, and all that has to come off.

You need to get back to the original shape, and it's quite easy to do - the original growth is darker and tightly packed, so all you have to do is cut off the light green, airy new growth.

OK, easier to show you how to do this than to describe it!

Even though this is a more complicated shape than a simple ball or cone, the principle is always the same: cut off the new growth and go back to your original shape.

As time goes by, the original shape gets denser and denser, as shoots within the shape reach the edge and get cut off. Clipping it then gets easier - and easier! 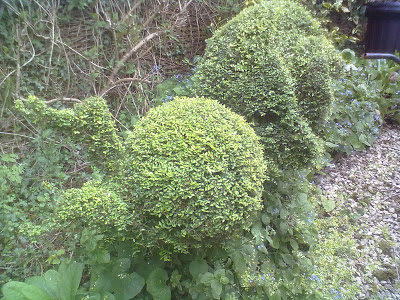 Here's the finished thing, after a little work on the spirals of the shell.

Between you and me, I'm not as happy with the spirals on the shell being set sideways, I preferred it when they were incorrectly, but more decoratively, positioned on the top of the shell.

Curses on Jim for pointing it out to me!

This piece of topiary is in a narrow passageway with the fence - you can just see it - on the left, then a narrow path, then the side of the garage. Not exactly an optimum position, and it doesn't get a great deal of sun, so the sides of the topiary are less dense than the top. So the shell spirals worked better when they were on the top of the item, not on the side.

Ah well, I've done it now, and I'm not going to change it again.

The baby snail is coming along quite nicely: that's why (by the way) Briony's head is turned inwards. She's looking down at the little one.

So, there they are, all neatly clipped, and that should last for a month or so.

Posted by Rachel the Gardener at 08:26