It's that time of year again... the Winter Aconite are going over, and it's the right time to move them around the garden.

First things first: Winter Aconite is NOT part of the Aconite family,  and it is NOT poisonous. The correct name is Eranthis hyemalis, and the common name simply reflects the similarity in the shape of the leaves.

They are one of my favourite flowers, one of the few to be flowering from very early in the year, and they are so brave and defiant, such tiny little flowers in all that harsh weather... irresistible.  By March, we're all sick and tired of yellow in the garden, but in January, it's a treat to see them, especially as they tend to come out some weeks before the snowdrops.

My only thought is that if anyone were to buy them at any other time of the year, you'd have the same problem that you get with snowdrops: if you buy dry bulbs, there is a high chance that they have been stored dry for some months, and have therefore died. It's far better to buy them them when they are flowering - not least because then you get free seed, as well as the bought bulbs.

Here is my step-by-step guide to moving Eranthis hyemalis:

Firstly, decide where you can take them from: 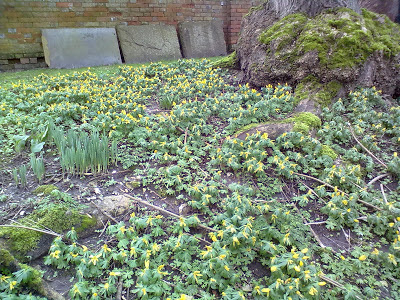 Plenty to choose from here!

And by the way, five years ago, there were none here. None at all. I have been gradually moving a few clumps each year from elsewhere in the garden, and they are building up into a fine colony.

So now when I am asked to pot some up for friends and relatives, or when I decide to move a few, this is my first port of call - "under the weeping ash". 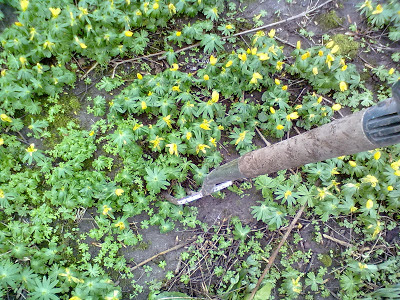 Next, select your clump.

I like to take a mature, flowering, clump, on the grounds that if by any chance the bulbs don't survive the move, then the seeds will at least have a chance to get it all started in the new location.

You can see on the left of the fork, there are lots of much smaller leaves: these are the seedlings from previous years, and they illustrate nicely how this plant will quickly form a carpet. 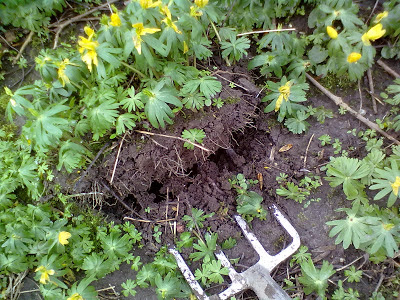 Now gently lever the fork, to lift the clump out of the ground. They don't root very deeply, and it's easy to get right underneath them.

I tend to lift out the whole clump on the fork, then "bounce" it a few times to shake off any loose dirt.

This helps me to check for unwanted weeds - this patch is a bit prone to Cow Parsley infiltrators, and I don't want to give any casuals a head-start elsewhere in the garden. 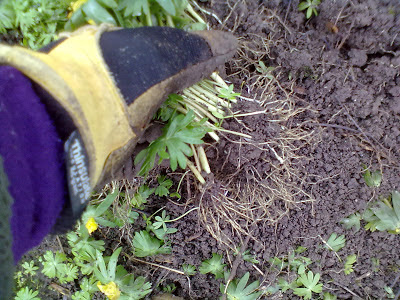 Here is the clump after shaking, and you can see the mass of fibrous roots which are under the bulbs, and the length of pale white stems which were above the bulbs, but under the soil.

As I said, a good time to check for unwanted weeds, odd roots, and other rubbish. 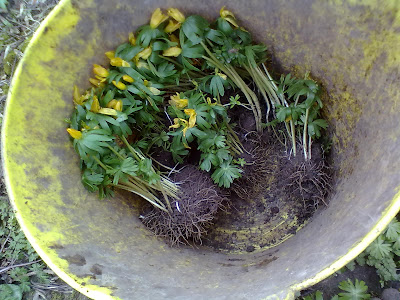 Then into the bucket they go, to be planted elsewhere.

Planting consists of digging out a fairly deep hole, chopping up the soil until it is as loose as possible given the conditions: settling the clump in place, somewhat deeper than it was before, then firming the loose soil around it.

At this time of year I don't usually bother to water them in, as there is plenty of moisture in the soil.

This lot went into the top of the Paddock Bed, where they will - in future years - be enjoyed from the kitchen window.  I also took another bucketful to fill in under the Dove Tree, and some more to bulk up those already making progress across the Perfume Bed.

I also made up another three potfulls to be given away: in that case, I simply potted them up in the usual way, watered them in well, and left them outside the greenhouse, ready to be given away by my client,  when required.

And the amazing thing today was that the soil was - as you can see - quite friable and light, despite being damp. Shaking removed most of it from the roots. And yet - turning uphill and waving dramatically at the skyline:

...there was snow on the higher ground!
Posted by Rachel the Gardener at 15:44