Hazel - familiar to all of us for the catkins in spring, and the nuts in autumn. Due to those naughty, naughty squirrels, the nuts are often buried in our flowerbeds, leaving us with surprise Hazel trees in later years.

In many cases, the seedlings go un-noticed until they are quite well established, and then - I hate to say this, but I've seen it so often that I know it to be true - it often happens that they are beheaded at ground level by the garden owner, or by a lazy gardener, instead of being dug out properly.

Now, this happens more often that I would like: usually with persistent self-seeders, such as Ash, Sycamore, Hawthorn and Blackthorn. This leaves the roots undamaged, allowing quicker and thicker re-growth of the top. And then they say to the gardener (me) "Oh, could you just pull those little seedlings out," unaware that the so-called seedling actually has a five-year-old root system, and now takes a fork and a serious excavation to remove it.

Anyway, back to the Hazel - when beheading happens to a Hazel, be it lazy, accidental, or on purpose, the result is basically a coppice. Coppicing is an ancient woodland management system: suitable trees were chopped at ankle height (or at waist or head height, when it's called Pollarding, but it's the same principle) to promote the growth of lots and lots of smaller stems, rather than the traditional single trunk.

Walk around any woodland, or parkland, and you will find coppiced Hazel, usually in groves, and - these days - usually massively overgrown.  They look like a photo of an explosion at ground level: a mass of stems, all much of a thickness, sprouting from one single point.

One of my clients has a couple of them: one was the result of ramming some "pea sticks" rather too firmly into the vegetable garden, and leaving them for a couple of years, not realising that they were Hazel and therefore (like Willow) hard to kill.

Another was planted by a squirrel, but they liked it, so they left it.

Now, it's a monstrous thing, and today I decided to tidy it up a bit.

Typically, I forgot to take a "Before" picture [memo to self: really, REALLY must remember to do that] so you'll have to take my word for it that the lower branches had spread out to the point where they obstructed the steps, and the bank. Which is currently sprouting snowdrops, and would look lovely, if only we could see it...

So I set to work with my trusty bowsaw, removing the outer layer of mostly horizontal growth.

Here's the result: a much neater shape, with the lower branches cleared away, along with some thin stragglers. 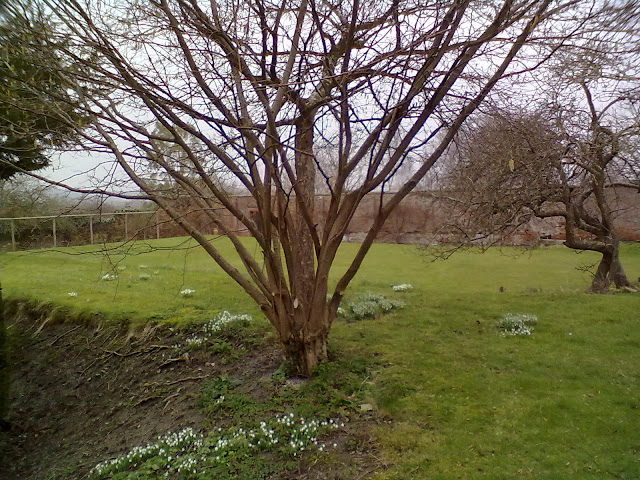 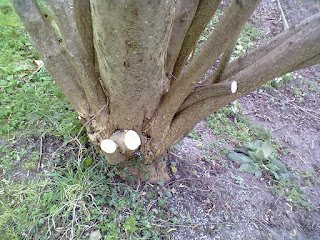 Here are some of my cuts to the base: as you can see, some of these stems are now quite substantial, they are thicker round than my wrist, but all were easy to nip off with the trusty bowsaw.

I try to cut as low down as possible, and with a slight slant to allow water to run off the cut - yes, just like when we prune roses, but on a more industrial scale.

Sometimes, as in that small one to the right, you just can't get "at" them cleanly, so that one was cut just as far down as I could reach.

And yes, I could have gone all the way back to my bag and got out the small pruning saw...  but when paid to work, there is always a calculation of Time It Takes To Get Correct Tool versus Money. And when I'm at the far end of a garden, well, sometimes I just do make do with the tools I have to hand. 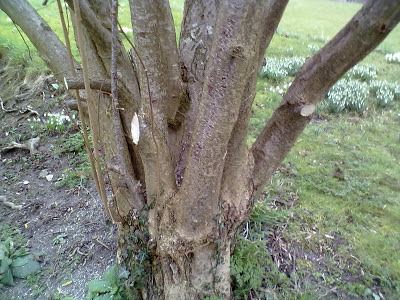 This is the other side of the tree, showing some more cuts.

The steps are now clear, and we can now see the snowdrops when we come in the side gate: success!

By the way, there are two types of Hazel commonly found in the UK - Corylus avellana is the normal, common Hazel, found in woodlands, parkland, road verges, canal-side walks and so on.

The other is Corylus maxima or Filbert, which is more often found in vegetable gardens where they were deliberately planted, as they produce larger nuts.

I'm not including Contorted Hazel, which I would only expect to find in ornamental gardens, as they are very expensive to buy.  Both C. avellana and C. maxima have a "Contorta" cultivar, and I rather think that there is a red-leaved variety as well.  All of them look very interesting in winter, and hideous the rest of the year - in my opinion - as the leaves are as contorted as the stems, leaving them look as though they are suffereing from some weird disease.  *shudders*

If you really want something with contorted stems, I would always suggest going for contorted Willow instead - Salix babylonica "Tortuosa" - which has very similar stems, but has long, elegant leaves that look nice all summer through: plus it does not throw up annoying straight stems, and of course you can chop it back wildly whenever you feel like it, as it's fast-growing. And every branch that you cut off will grow: so instead of one very expensive slow-growing shrub, you get as many fast-growing but easily-manageable shrubs as you wish.

So, when out walking, if you see a tree with lots of smaller stems, instead of one trunk, very much like the one pictured above, then it is probably Hazel.  And at this time of year, it will have catkins!


Did you enjoy this article? Did you find it useful? Would you like me to answer your own, personal, gardening question? Become a Patron - just click here - and support me! Or use the Donate button for a one-off donation. If just 10% of my visitors gave me a pound a month, I'd be able to spend a lot more time answering all the questions!!
Posted by Rachel the Gardener at 17:17