Buddlea - time for the annual chop

Buddlea are famous for growing into mad monstrous shrubs, and if you want to keep them under control, you have to give them a very stern annual chop.

Today it was the turn of a fairly aged specimen, which in earlier years had split, fallen over, re-grown, split again and so on.

Once it was subjected to my tender mercies, it quickly developed a framework, so that we would have clear space underneath it, and flowers at a variety of heights: if you chop it all down to waist height, or knee height, you get a sort of "lollipop" effect, which can be very attractive, or which can be downright ugly.

For this one, I choose to keep three main uprights, at slightly different heights, with a couple of lower ones.

As per my post of last week, I tried very hard to remember to do a "Before" photo, and I very nearly managed it: I'd done half of the first upright before I remembered, oops!

So here it is, more-or-less Before: 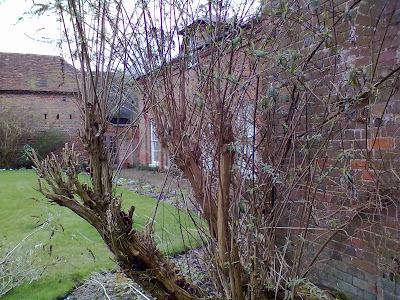 As you can see, having been trimmed to this framework last year, it produced a mass of long, straight shoots, giving a very good "covered with flowers" bush through the summer.

All I have to do it cut off each growth, as low as possible.

This results - due to the delights of apical dominance - in each cut stem producing two or three new stems in the following season, so the shrub just gets bushier and more floriferous every year. 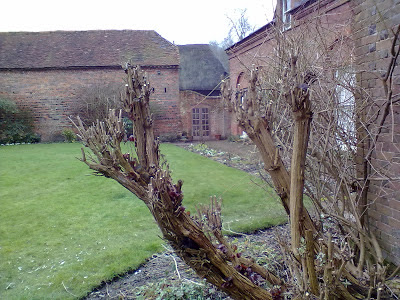 And here is the finished article, retaining the three main branches, which are more staggered in height than they appear from this angle.

I have also trimmed off all the whiskery bits and pieces, and have removed any dead stems.

And not a moment too soon, there were already bunches of leaves to be seen: and if you leave it too long, all that energy is wasted, so if you have not already done so, get out there and get that Buddlea chopped!
Posted by Rachel the Gardener at 16:55