One of my Botany Crew was expressing an interest in my crib sheets the other day.

Crib sheets? What are they, I hear you say.

Well, when looking at plants, after a while, you get quite proficient at identifying what type of plant it is ("errr, it's a thistle") but the tricky part is finding out exactly which thistle it is.

Firstly a quick reminder of how plants are named: all plants belong to a family, but often the families are HUGE so they are not much help. For example, the Rose family - Rosaceae - contains Rowans, Cherries, Blackthorn, Pears, Hawthorns, brambles, Potentillas, strawberries, Agrimonies, Geums, Meadowsweet, the Sanguisorbas, the Alchemillas, not to mention actual roses.

Once you get beyond the Family, you get Genus, then Species.

So, for example, the common bramble is in the family Rosaceae, genus Rubus, species fruticosus.

You could say that the Family is the ethnic group, the Genus is the surname, and the species is the christian name. So we don't use Family much in everyday botany.

And of course you will already have realised that plants are named chinese-style, with the surname first. Or like a school register. Once you get accustomed to that, it gets easier to remember them!

Surnames are capitalised, first names are not: properly speaking the whole thing should be in italics but I think that makes it look too daunting to non-botanists.

In my experience, the differences between the various species (christian names, but appearing after the surname, remember?) often boil down to just one or two characteristics, so the trick is remember which characteristics are relevant to your plant, and which way round it is.

I call these the defining characteristics.

F'rinstance, there are three common types of a pretty blue field flower called Scabious. At first glance, they all look pretty similar.

[Diversion: what a horrible name, Scabious.  No wonder they are still not particularly popular garden flowers. I often wonder if the fairy of the Scabious is madly, horribly jealous of the, for instance, Wintersweet fairy... End of diversion.]

So, Scabious, wildflower-type, non-cultivated, the sort you would find out in the wild:

If you look at pictures, preferably in a reference book rather than on Google images (as many of those are wrongly labelled!) or if you look at the actual flowers in the field, you will quickly see that they have two sets of leaves.

One set of leaves appear at ground level, and are called basal leaves.

The other leaves appear part-way up the flowering stem -  known as stem leaves.

I've done a quick cut-and-paste for you: 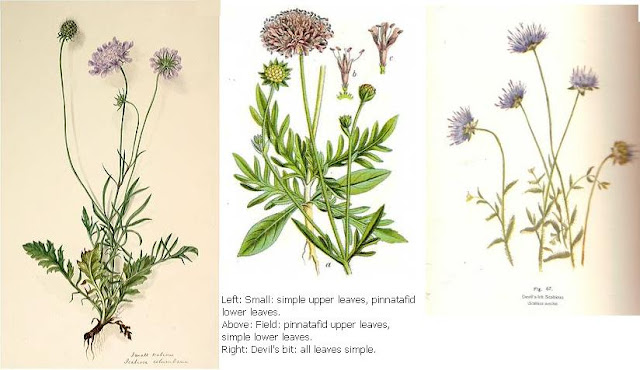 It's not always easy to work out these details at first, but the more you do, the easier it becomes: look at the leaves on each picture, and work out which are the basal leaves (basal, base, bottom), and which are the stem leaves.

The central one, annoyingly, has cut the plant in half and put the top half over the bottom half, so look closely.

Then say to yourself  "If the leaf is long and sort of lance-shaped, and does not have any lobes or shapes or cut-outs, then it is SIMPLE. If the leaf looks as though someone has been at it with the scissors, cutting into it from the outside, but not quite as far as the central vein, then it is no longer simple, in fact it is PINNATAFID."

Now look again at the pictures (ok, you can read the caption as well) and see what conclusions you can reach.

So, on the left is Small Scabious or Scabiosa columbaria. (see - putting it in italics makes it less accessible, doesn't it? Admit it, you didn't even read the latin name, did you?) The lower leaves are pinnatafid, but the upper leaves are very simple. They are long and thin. Lanceolate - like a lance.

In the middle is Field Scabious or Knautia arvensis: the lower leaves - follow the stem up from the root and the first pair you find are simple. All the rest are pinnatafid.

On the right is Devil's Bit Scabious or Succisa pratensis: and all the leaves are simple. No pinnatafid ones at all. But they are not as thin as those of Small Scabious.

So if you now find a delicate blue flower, on a slender stem, and you are pretty sure it's a Scabious, you can look at the leaves and easily determine which one it is.

In fact, you can just look at the upper leaves, but you can then also check the lower, basal, leaves for confirmation. Although be warned, sometimes it is not easy to find the basal leaves, they have often rotted away by the time the top part is flowering.

Now  you've learned all that, fine and dandy: but how are you to remember it, when there are several thousand other wild flowers to learn?

Either write or type these defining characteristics in a grid.

Now, as soon as you look at it, you can see that it's not 100% clear: if you can't find any basal leaves, and can only look at the upper leaves and they were simple, would it be Small, or Devil's Bit?  So you look again at the illustrations, and you can see that the Small Scabious upper leaves are very fine, very narrow - lanceolate, in fact - whereas those of Devil's Bit are more what you would call leaf-shaped.

So you add the word Lanceolate to the upper leaves of Small Scabious.

There you go - a quick simple crib, to remind you of the salient points, which you can carry with you and quickly check, rather than having to wade through a whole paragraph of botanical description.

And after a while, you find that you won't need it any more.

(Of course, if your specimen doesn't "fit" within the crib, then you have to dig out the reference books and go through the less common options. But you will quickly find that in most cases, you are seeing the commonest varieties.)

I have a whole pack of such cribs, on index cards with a ring through the corner, easy to flip through. Or at least they were before they got wet the other week... but that's why I type mine and hold them on the PC, so that I can re-print them when they get wet, or update them when I find additional information, or mistakes. 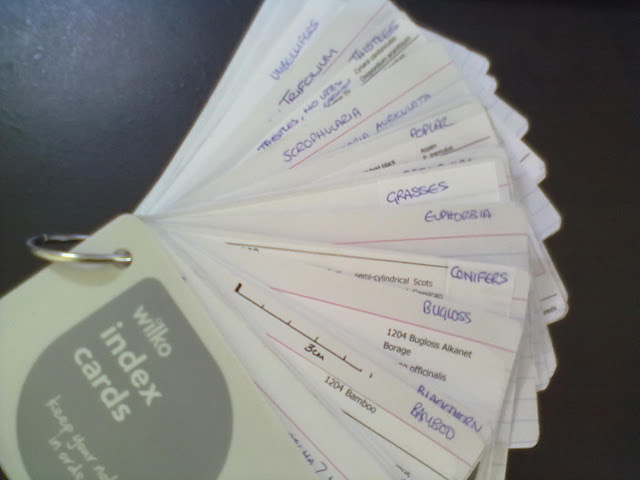 The plan is to laminate them, once they are "perfect".

"And then sell them!" says Stephanie, looking at me hopefully....

Ah, but making your own cribs helps to fix the defining characteristics in your mind, I find!
Posted by Rachel the Gardener at 17:24