"Truncheon method?" I hear you ask.

Today, mid February, my client and I agreed that the Mahonia (cultivar unknown, but not "Charity" as she seriously dislikes that one and wouldn't have it in the garden) was now fighting with the bamboo behind, and we both agreed that we preferred the bamboo.

As both were about the same height (it's a semi-dwarf bamboo) I suggested that we should brutally chop the Mahonia down to about shin height, so that when it regrew,  instead of fighting, we'd have one leaf shape below, and the other above.

We both liked this idea.

My client then asked if the material to be removed could be used as cuttings. Resisting the urge to say incredulously "in the middle of winter??", I put forward the opinion that it was always worth having a go, and suggested trimming the off-cuts down to about two feet in length, then simply ramming them into the nursery bed, and we would see what happens in spring.

Now, this work certainly doesn't fall into the category of softwood cuttings taken in summer, nor of semi-ripe cuttings taken in autumn. It's also not quite hardwood cuttings, in fact the nearest technique is probably that of the truncheon, which is basically taking a branch, removing all smaller branches, leaves etc, then ramming 50%-75% of it into the ground and leaving for a couple of years. It's a well-established propagation technique for quite a few trees, including fig, and particularly including Mulberry.

I say that with gritted teeth, as I have repeatedly tried this technique with this same client's Mulberry, and have totally failed to get a single one to root. I have a feeling that I've been too modest in my material: most of the references to this technique refer to branches as big as your arm.

Anyway, there it was, we'll try the truncheon technique, so after cutting the shrub down to size, I took half a dozen of the best of the off-cuts out to the meadow (yes - this client's garden is so big it has a meadow, sigh), trimmed off the lower material, reduced the top leaves to just a couple of leaflets, and rammed them into the soil. 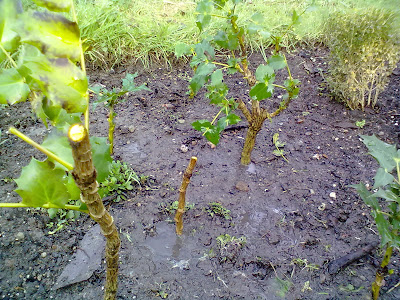 There you go, don't they look ridiculous?

I sloshed a bucket of water over them - quite un-necessarily, bearing in mind how damp the soil is, but old habits die hard - and now we will leave them until Spring, and see what happens.

I might even have another go at the Mulberry.....

Posted by Rachel the Gardener at 16:32