Tues: When is a dead Escallonia not quite dead?

After a winter like the one we've just had, I am finding any number of shrubs that have been seriously damaged, if not destroyed, by the cold weather.

Here's a classic example: an old, well established Escallonia which, after several years of careful shaping, was exactly as we wanted it - and now look at it: 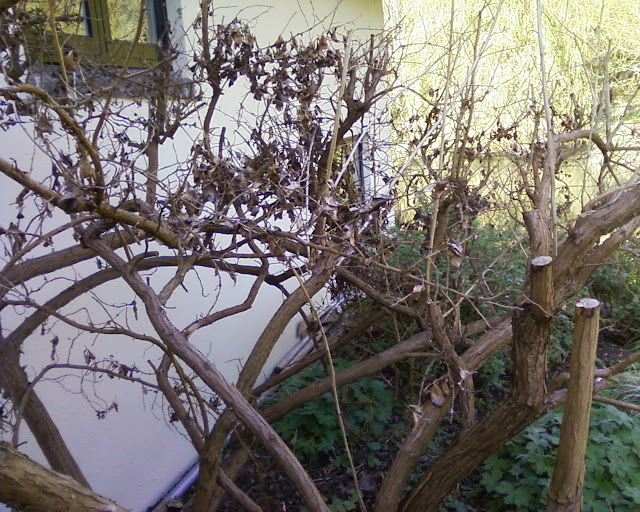 Looks fairly horrible, doesn't it? "Oh no - will we have to chop it down?" asked the client, wiping mock tears from her eyes. I suggested, as I am suggesting to everyone at this time of year, that we leave it for just another couple of weeks, to see if it will come back or not. The client was tempted, but hated having to look at the horrible dead stuff. So we agreed on a compromise, I would chop off all the dead stuff back to a neat framework, and then we'd let it sit for a week or two, with our fingers crossed.

So, secateurs in hand, I waded in amongst the carnage to see what could be done. And lo! and behold, for there were buds. Not huge numbers, but nice fat ones, and not just from the very bottom, either. 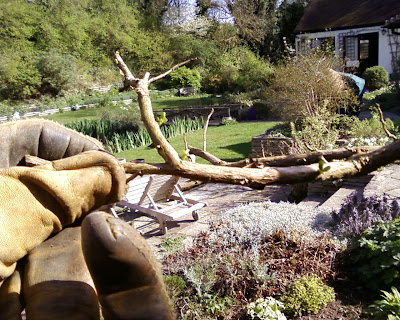 I don't know if you can see this very well, it's hard to get a camera phone to focus on something close at hand, but there are signs of life in a couple of places on this twig.

And if you can't see them, well, you can enjoy the view of a clients' garden!

So, I set to work cutting back to the nearest good bud, while keeping as much of a framework as I could, which meant keeping a few branches that I thought were unlikely to sprout, but you never know your luck.

Here's the "after" version: 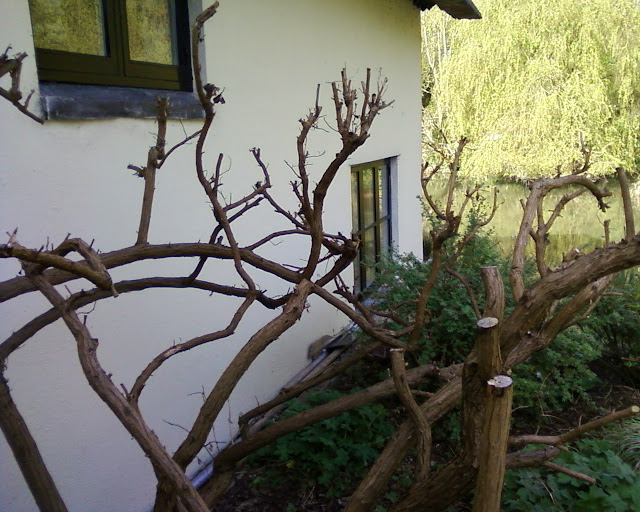 At least it now looks neat!

Then I had an interesting problem to solve: Alan the handyman is coming in soon, possibly next week, to replace a length of courtesy fencing that has rotted away to nothing.

"Courtesy fence?" Oh, I mean a fence that is only put up to show the boundary, not to keep people in or out. It runs between this garden and the next, and it has a friendly opening section, so that the neighbours can wander into each other's gardens at will. It's a very simple arrangement of upright posts, about 3' tall, with round cross-poles making a handrail.

And at the bridge point - where the stream runs from "their" lake into "our" lake - we have been training a rose along it, just for decoration. I know it seems a bit contrary to have a thorny rose running along a handrail.... but it stops people leaning on it!  However, now we have to remove the rose so that Alan can get to the handrail to replace it. 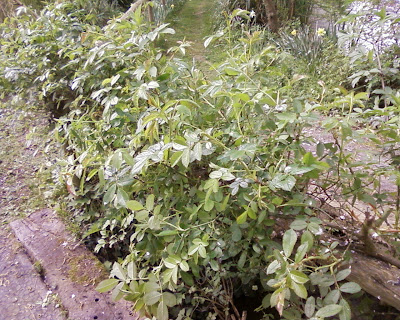 To give you some idea of the problem, here it is: can you even see the handrail?

No, me neither, but I know it's under there somewhere.

(Actually, you can just about see it in the bottom right-hand corner where I have started pruning it, then decided I should take a photo before, not after....)

The worst thing is that when I started doing this, I broke all my own rules.

I have strict rules about climbers: they are to be tied to the wire or trellis, not twined round it.

If you twine a climber, especially a rose, around the support then as the stems grow, they will break the support. And you will never be able to get them off, if you need to, for example, paint the wall behind them.

In fact, for trellis placed flat against a wall, I always ask clients to ensure that the trellis is a) not clamped flat to the wall but is an inch or so away, to allow air to circulate and b) instead of being screwed to the wall, is hinged at the bottom and pegged at the top.

This means that when it's time to paint the wall, we just unclip the top, gently lay the trellis down - or lean it against a couple of supports, if the plant is no longer very flexible - paint the wall, then pop it back up. Simple, quick, the painters  like it, the plants like it. We all win.

So, back to this one: I didn't have any wires at all, I just wrapped the rose stems around the handrail, in an interesting over-under cross-over pattern.

So, "What Does One Do?"  Well, "one" runs along  the stem from the base, chopping off all the side shoots, leaving just the main stem, and it's one or two biggest shoots. Just like pruning normally, going back to a framework.  I then carefully unwound the main stem and the big shoot, in each direction, and lay them down on the path.  Hopefully once the handrail is replaced, I will be able to re-wind the shoots in each direction, and they will continue to grow again.

Whether they will flower or not is another question... I'll let you know later in the year!
Posted by Rachel the Gardener at 16:36