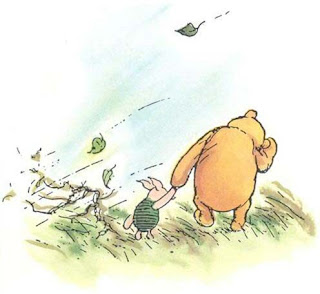 Or, to be more accurate, a Blustery Day. Who was it that said, of March, "in like a lion, out like a lamb". Or was that April? No, I'm pretty sure it was March. Well, it certainly went "out" like a lion, didn't it?

I'm not keen on blustery days, when weeds and debris are whipped out of  my hands before they have a chance to get to the wheelbarrow... furthermore, I'm still suffering the tail end of the cough-and-cold, so I decided to take the day off, stay indoors, and hope for better weather next week.

Well, I say "stay indoors" but I had a couple of errands to do, not least being paying my monthly charge to Dews Meadow for my outlet: luckily all the plants were still upright, the boys in the shop are extremely good at picking up any fallen ones, ("Thanks, guys!") but it seems a bit mean to rely on them, so I drove home thinking about ways to keep the pots standing upright.

It seems to me that a piece of old trellis, raised a few inches above the bench, would provide a grid to hold the pots in place. Now all I need is a piece of old trellis... perhaps I should be brave and go out to my garage for a rootle round. There are all sorts of interesting things in there... maybe I'll just have a cup of tea first...

...no, instead, I'll show you this photo of a clump of Solidago or Golden Rod from earlier in the week: not a great favourite of mine, as I am usually presented with a floppy clump and asked to "make it neat". Hmmm. This means having to avoid saying "well, you should have staked it/let me stake it a month ago when I mentioned it", and having to lop off all the damaged stems leaving a neat but greatly thinned display.

(Considering that there is a perfectly lovely dwarf form - "Fireworks" freely available, I often wonder why anyone still plants the "normal" tall one....)

Anyway, this clump is not too badly behaved, as long as I get the semi-circular heavy-duty metal hoops in place early enough.

But the point of this photo is to illustrate an interesting variation on the usual growth pattern..

You might remember in Weeds, Weeds and more Weeds  I included a photo of a Miscanthus grass, showing the typical grasses' circular growth with a dead centre.

Herbaceous perennials often do the same, but to a lesser degree - the outer edges are more vigorous, the inner less so, rather than being quite dead. But they are always more-or-less circular.

This Solidago, however, has tried to form a clump and has been thwarted by the mature Yew hedge on the left. So it's formed a line!  Emphasised in the photo by a red line, for clarity.  You can clearly see the barren Exclusion Zone where the Yew has made claims to all the nutrients and water available, denying any to the Solidago.

Mwaah haa haa! Oh, sorry, that's me laughing maniacally at something that can curb the growth of Solidago.