Oh, what a relief, two days of blissful sunshine and general warmth. 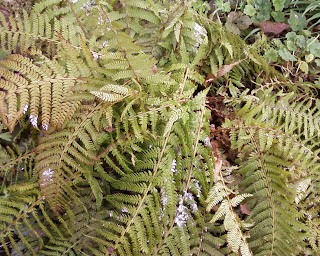 Today I have a big list of jobs to do: my client is going to be unavailable for a couple of weeks, so I have been left a huge long list, which is what I like best.

I think it's being able to tick the jobs off as they are done - so satisfying.

Anyway, I started with a few minor jobs that have been left over from the winter - cutting back the ferns for one. Most of them have been done, but there are always a few that escape me. This one, as you can see, was looking quite tired and bedraggled, and it was high time for the chop. 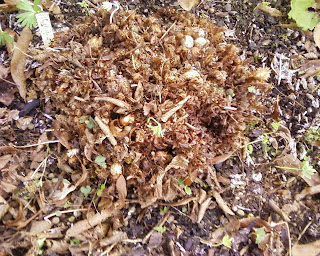 There, much better. I love ferns at this exact time of year - when those new fronds aren't even starting to open yet, but are clearly visible.

It's the promise, isn't it?

I think if I had ferns in my own garden, I would be captivated with the moment that they unfurl, but not being able to look at them every day, I tend to miss those moments.

Next on the list is a bit more planting up of the poor little orphans that were removed from the Left Hand Shrubbery: 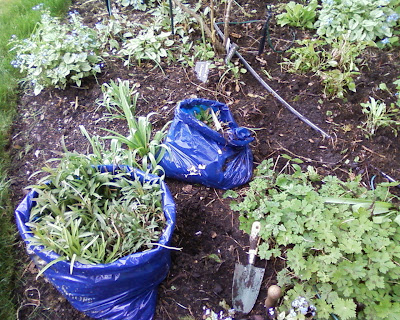 Here they are in their bags, quite happy and comfortable, having been there for a few weeks.

As you can see, we will use any sort of bag for this! Not just compost bags, but old carrier bags were pressed into service as well.

In this case, we had a lot of asters that were looking for new homes, and it was decided that the Right Hand Shrubbery was going to be the right place for them. 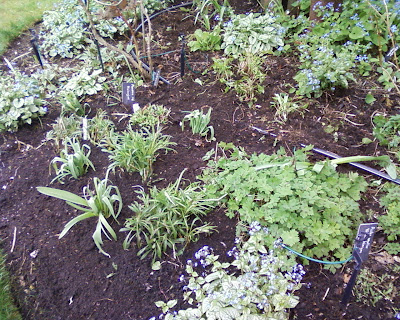 And here we have the "after" shot,  each bag-full was split up into usually three portions, which were then planted out in small groupings.

Today, I didn't even need to water them in much, as this garden is served with an irrigation system, which has made a huge difference to the garden.

Not just to the plants, come to think of it, but to my client as well, who no longer has to spend time with the hosepipe in the evenings!

Now the beds get ten minutes twice a week, and that's all they need. 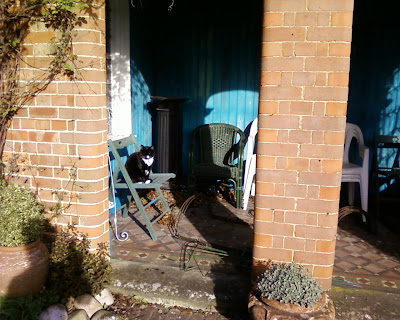 Can you see that tiny little black kitty sitting in the summerhouse?

That's Sabrina the Hunter Cat, she of the "I got a rabbit and I don't know how to kill it" fame.

Here she is, disdaining me in some style, and refusing to come over and say hello.

Silly me, she's charging up her batteries, we all know that cats are solar-powered, don't we?

So, enough of admiring the cat, off to the meadow I go, it's time to get the 2nd earlies in the ground, but first I have to weed, edge and dig over the bed. 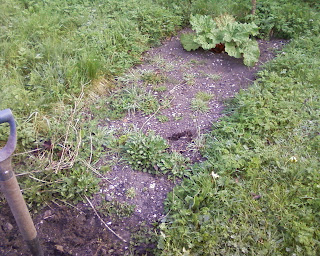 Here's the Rhubarb Bed, so called for the obvious reason, and it has very nearly disappeared under weeds and encroaching grass.

Well, it hasn't had any attention since last autumn, so we shouldn't really be surprised.

My first job is to dig out the main weeds in the bed: then to cut the edges so we can see where we are with it.

We are slightly breaking the rules here, as we had potatoes in this bed last year, and properly speaking, we should rotate the crop. 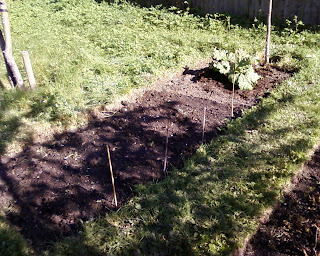 But we are going to risk it, just for one year.

Here's the bed afterwards - you can see that by now, the sun has come out, and yes, I have removed two layers and am working in t-shirt and shorts again.

I've put in four rows of 2nd earlies, marked by the stakes, and I've put some of our compost round the rhubarb as encouragement. 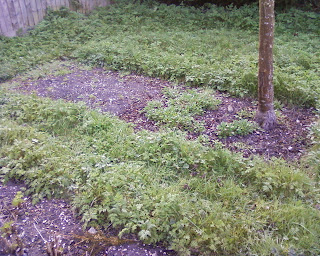 Then I turn my attention to the other two beds: the middle one is the Raspberry bed, filled with Autumn Bliss late-fruiting rasps, which were installed just two years ago, using left-overs from my own garden.

They send up suckers everywhere, and often they come up with good roots on them and can be transplanted.

Free plants! We love that! 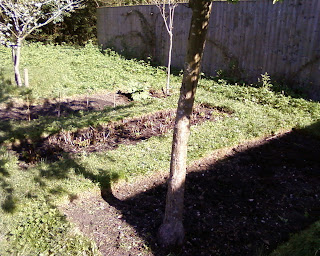 Again, later in the morning, all three beds are weeded, dug over, (not the same thing), and neatly edged again.

This should make it easier for mowing:  I always feel that it's a kindness to the mower if the gardener can get good clean edges on the beds, as it helps them avoid that nasty "falling off the lawn" situation, which leaves big bare scrapes on the grass.

In the days when I used to regularly mow as well as garden - these days, most of my clients either do their own grass, or have "a man" who does it - I would sometimes do the edges first, especially at the beginning of the year. That way you can see where you are going, no accidents, and as soon as the mowing is done, the whole job is done.

The rest of the morning was spent weeding and tidying The Lane, the approach to the house, then sweeping it and applying weedkiller. It always looks so nice when freshly done!

After lunch it was off to Childrey and one of my ad hoc clients, and a quick round of weeding, chopping, tidying, and planting up the big pots for the summer.
Posted by Rachel the Gardener at 19:56