Mon: Yes, we're back to November

It was just 5 degrees this morning! Such a shame, after last week: but nevertheless, I went out in shorts. "Live and Die in Shorts!" is my motto.

Of course, I was also wearing a long sleeved tee, fleece and sleeveless jacket, plus thermal gloves: but no thermal socks today, my waterproof boots have gone the way of the last pair and have cracked, so there's no  point wearing them. So I'm back to "summer" wear of leather boots, with thick but non-thermal socks

I do admit to having second thoughts when I got out of my car! But after ten minutes or so I was starting to warm up, and it wasn't that bad, really.

This morning, as a change from Prairie Bed Weeding, I took the opportunity to go round to the Courtyard Garden and do a bit of weeding there. It doesn't need a great deal, but it's good to keep an eye on it. To my horror, the Pampas grasses were looking like nothing on earth, so I had to brace myself and get in there with the secateurs.

In case you  have never had the pleasure of owning a Pampas Grass - you know what they are, great big things with fluffy plumes - hang on, I'll find a photo of one: 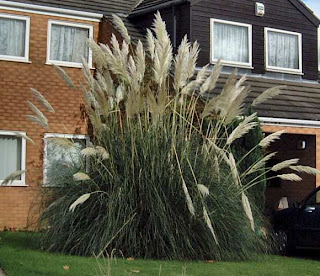 There you go, stock photo blatantly stolen from the internet, showing a common or garden Pampas Grass or Cortaderia, in the commonest-of-common plantings, ie slap bang up against a suburban  house.

This style of planting, and indeed this plant, has somewhat fallen out of favour, being considered "very seventies".

However, it gives you a good idea of how big they get. This one is probably not more than 5-10 years old, and you can see what a monster it is. I doubt that downstairs room ever sees the light....

The two that I was tackling today looked more this this (below) except that they were in one case right up against the house, and in the second case up against the back fence. 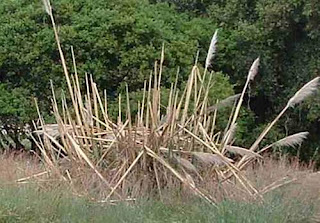 And they were pretty much all brown, with that same tangled mess of broken flowering stems and dead fronds.

Horrible job, but they pay me to do it... so.... pulling gloves up, sleeves down, collar up, zip up, and trying to keep my legs out of the way, I set to work.

Why such precautions? If you put "cortaderia" into google translate you get something  like "sword" , which just about says it all for this plant. Every single frond is serrated - hard and serrated - all the way along both edges. To my fleece, they behave like velcro, sticking and dragging. On bare skin, it's more like razor blades. I managed to get three large bags stuffed with the dead stuff, with  only a couple of minor grazes and one big slash across the side of my neck. Not bad! I find it's better to stuff the dead material into bags, rather than trying to just load it into a wheelbarrow, especially when - like today - it is blowing quite hard. The fronds will blow just everywhere, and will be a menace to bare skin for months afterwards.

I always have some old compost bags in my car, and luckily I also had a very large blue bag, perfect for dealing with this sort of stuff.

By comparison, I had a nice peaceful afternoon splitting herbaceous perennials and re-planting the new sections, always an enjoyable job, and at one point I even took my fleece off! However, the sun went back in, so that didn't last long.

On the way home I stopped off at Dews Meadow to check my bench - alas! no sales! - then back home and done for the day - oh, apart from a bit of potting up.  I weeded out an area of shingle that was full of Helleborus seedlings, and as the only hellebores for some distance are a group of very nice dark red ones, there is a good chance that these seedlings will be similarly dark. So I've potted them up, four per pot, and carefully labelled them, and we'll see what they're like in a year or two!

Posted by Rachel the Gardener at 20:14