Here's a lovely example of a mature Hazel whose owners, many years back, didn't know about rubbing out the buds of suckers appearing at the base, and who - instead - just cut them off, once they were well sprouted.

So they cut them off again.

This is pretty much the definition of coppicing - to repeatedly behead a tree  at the same point. With coppicing, this is done on purpose in order to produce a crop of same-size shoots, all equally long and straight.

With an ornamental tree such as this one, it results in a mass of stumps at the base: 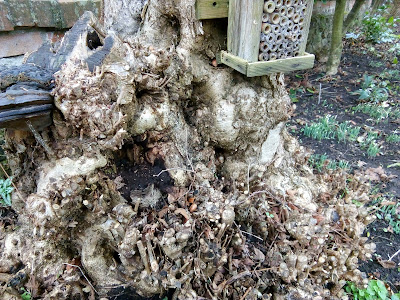 Not exactly pretty, unfortunately, and the normal root flare is completely covered with this mass of old, cut, shoots.

This can be a bit of a problem, because it means we can't inspect the base of the tree, to check for damage, rot, etc. 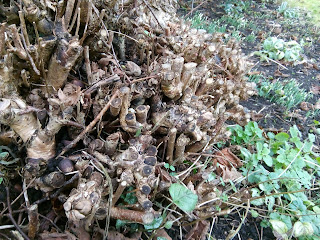 Here's a close look at the mass of cut sprouts.

Hmm, it's a bit of a jungle, and it's not really what I would want to see at the base of a tree.

This mass of upward-pointing cut-off shoots collects water, and provides a haven for boring beetles (as opposed to really interesting beetles, ha! ha!) which leads to rot: and of course once you get any form of rot near to a tree, there is a risk of it spreading to the main trunk.

Many of these dead shoots have evidence of woodworm, which is definitely bad: the good news is that  some of them are dead and dried-up, which meant that I was able to pull a few of them off completely, which at least allows some air back into the area. 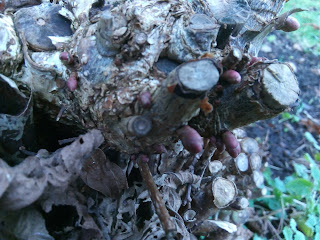 And here in close-up, you can see that the old, dead-looking sprouts are still capable of producing buds, which are going to sprout into a new thicket of suckers.

At this stage, they are so very easy to remove: a gloved thumb or finger will do the trick, and they won't grow back from that exact point, so it's well worth taking the time to rub out as many as you can, while they are still tiny.

This particular Hazel is a normal one, not a contorted one:  I've written several times about the necessity for rubbing out new shoots on grafted contorted Hazel - just go to the Search box, top left, and type in Hazel to see them -  but the same rules apply to normal Hazels.

So there you have it - get out there every spring, check around the base of your Hazel - contorted or otherwise - and rub off those buds while they are tiny!