Beware of strange infiltrators in the garden.... Houttuynia cordata, to be exact

Here's an odd thing: one of "my" gardens has what we call the "wild border", which is a north-facing border, backed by a low wall and a high hedge, which contains a few solid shrubs, a big Hazel tree, two slightly over-large Hollies, and an underplanting of Hellebores, Solomon's Seal, and Primroses.

We call it the "wild border" because I don't weed it very much (as per instructions), in order to give the wildlife somewhere to lurk, and a way of getting from one side of the garden to the other, without having to brave the open lawn.

Every so often, though, I am directed to tidy it up, to prevent it from returning to the wild, and last week, while weeding, I found a new plant growing there. 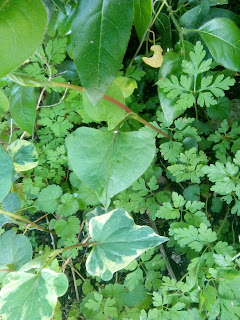 At first sight, this sent me into a bit of a panic, because it looked a bit like Japanese Knotweed (Fallopia japonica), whose leaves have a very characteristic blunt-bottomed spade shape - rather like the sort of spade you see on American movies, when they are burying corpses.

You could also describe them as shield-shaped: technically, botanically, they are cuspidate (ending abruptly in a long point) and truncate (ie chopped off, not flaring gracefully in to the petiole or stalk).

And if you look at that plain green leaf, it does indeed appear to be truncate, and the stem looks kinda reddish, which is another feature of Japanese Knotweed.

Why did the possibility send me into a panic?

Because Japanese Knotweed is a terrible, dreadful thing: don't take my word for it, look it up for yourself. It is invasive, thuggish, fast-growing, destructive, impossible to kill, and it can - seriously - make your house un-sellable. There are photos on the internet of houses with the stuff growing up indoors, through patio doors, through walls - 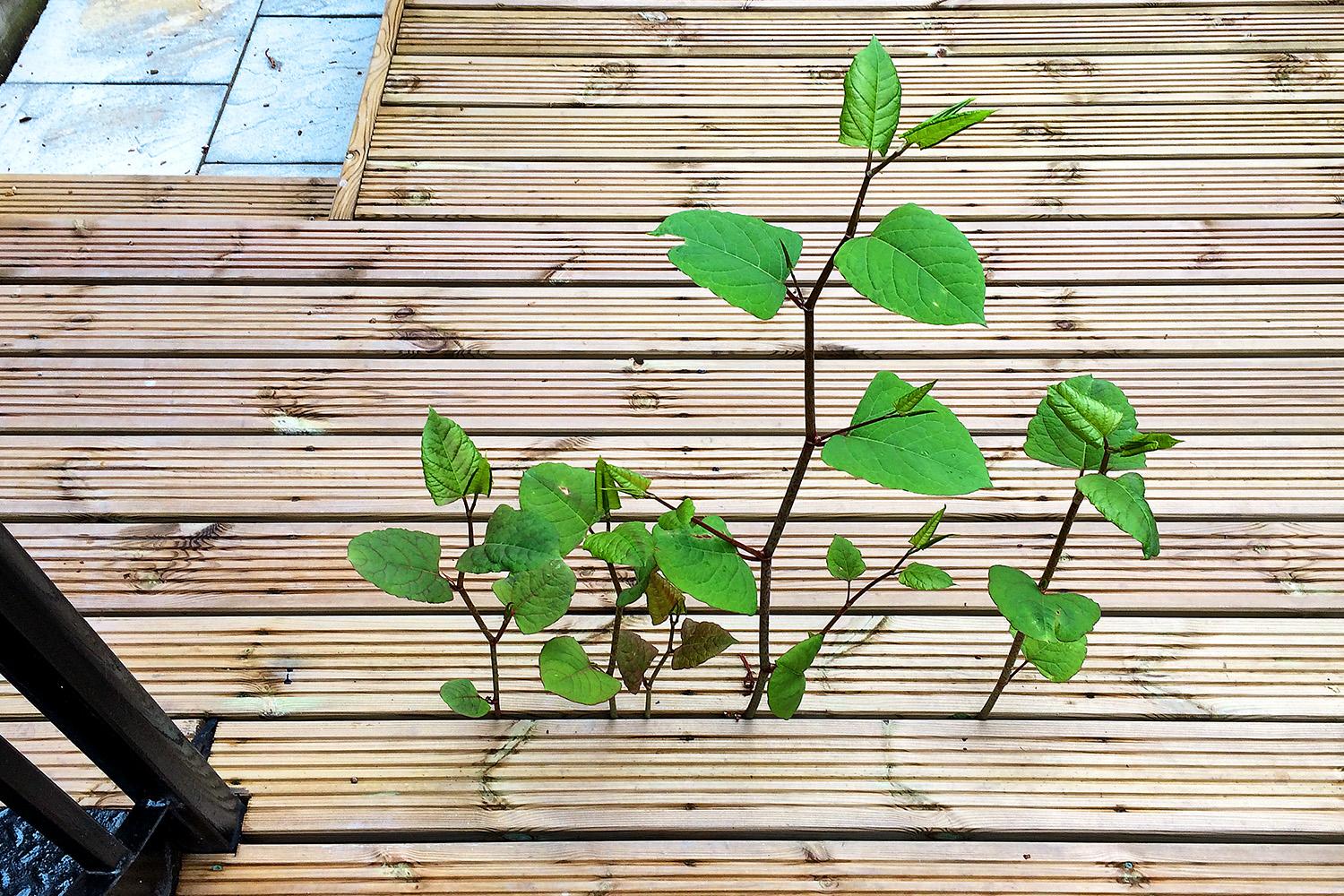 In this photo, it's actually growing through the cladding on a house, from the inside outwards!!

However, after a few minutes of thinking about it, I realised that it was not Knotweed.

How do I know?

Firstly, those leaves - most of the leaves on my invading plant were properly heart-shaped ("cordate" as we botanists say), only a few of them were truncate.

Secondly, the stems were more or less straight, whereas Knotweed stems have a distinct zig-zag to them, as you can see in the photo above. 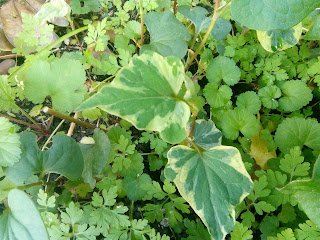 Thirdly, quite a lot of the mystery plants were variegated - right - which Japanese Knotweed definitely is not.

And the variegated ones looked very familiar, although for some reason I was expecting them to be red... ah, that's it, it's Houttuynia cordata, which is a thug in its own right, but nowhere near as bad as Knotweed.

I've encountered the red one - Houttuynia cordata 'chaemeleon' - many times, and people either love it, if it's well behaved: or they hate it, if it is attempting to take over their garden.

As a final confirmation, Knotweed is a lot, lot bigger than Houttuynia: it can grow up to ten feet tall (3m), whereas Houttuynia cordata is barely ankle height.

So, phew! what a relief, I won't need the flamethrower: but I am going to have to dig, did, and thrice dig in order to get this infestation out before it swamps the entire bed.

As for where it came from, the Client and I looked at each other in total bemusement, because we had no idea.

No new plants had been introduced to that bed for at least several years, so it didn't sneak in amongst the roots of a bought or donated plant - which is how many weeds find their way into our gardens.

And it seems unlikely that a bird or a squirrel dropped some of it: as far as I know, it doesn't spread by seed, it spreads by rhizomes - underground stems which extend in all directions, unseen. 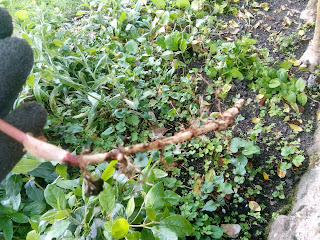 These rhizomes - left - can be yards long, and are deliberately and maliciously fragile: so if any bits break off, they will immediately sprout and become new plants.

But I can't quite imagine a squirrel bringing a mouthful of it into this garden? Or a bird, with a big beakful of it, flying in and dropping it?

Well, this week I undertook the task of digging it all out, which took me most of the morning, as it included lifting every single plant in the bed - a very special dark-flowered Bergenia, a lot of Hellebores, and a small Viburnum - shaking off as much of their possibly-infected soil as possible, and potting them up into clean soil, pinched from the vegetable garden.

These potted plants were moved into a quarantine area, rather than just heeling them in (gardeners' jargon for "temporary planting with intent to heave them out again within a few weeks") (how is it different from proper planting, I hear you ask? Well, to be honest, it's no different, apart from not having to worry about the proper spacing, between plants, on the grounds that "one" will be digging them up again before they reach their potential) where was I? Oh yes, plants in pots, in quarantine, to avoid the risk of transferring any fragments of those rhizomes into other areas of the garden.

Then I was able to dig over the whole bed, and lo! and behold, there was definitely an epicentre to the infection.

I found, about 6" down, a drainage plate - a flat plastic tray with short legs, the sort you find in those so-called self-watering pots - with a load of broken crocks on top of it. Above that, a dense tangle of Houttuynia roots: a real mass of them.

The only explanation I can come up with, is to suggest that at some point in the past, a plant had been grown in a self-watering pot, and had been planted out in the border. The plant in question must have had a sufficiently pot-bound root system that, when it was de-potted, the whole thing came out in on go, and was planted, including the drainage plate and the layer of crocks above it.

To finish the task, we are allowing the bed to lie fallow (more gardeners' jargon:; this just means that we won't replant anything in it, we'll just leave it blank and empty) for a couple of weeks, so that we can spot any small fragments of Houttuynia growing back: despite my policy of Dig once, Dig twice, Dig thrice, I doubt that I got every single scrap of root out!

Then, once we are sure it's not coming back, we can replant the quarantined Bergenia and Hellebores, and hopefully all will be well.

And let this be a lesson to you, dear Reader: so-called "wild" areas are a nice idea, but you still need to get your gardener to check them out, at least once or twice a year!