I've written about Curly Hazel many times (if you want to read more, just type "curly hazel" into the Search box, top left of the page), and now here's another one: I planted this rather nice little curly wurly Hazel last year, in the "woodland" bed: 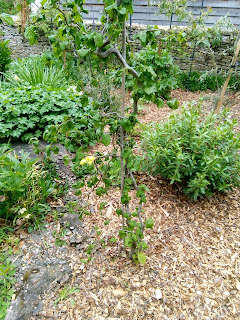 It's doing well, growing nicely, it even has some catkins on it.

But look more closely at the base... 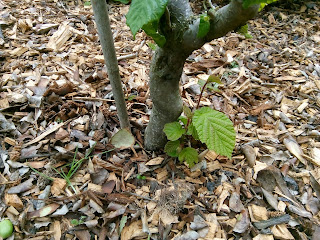 What do we spy, with our little eyes?

Yes, it's a reverted sucker, a non-curly-wurly shoot, which is springing up from the rootstock, below ground level.

(no, that big one to the left of the trunk is the original support cane, it's not a super-thick reverted straight stem, but well done for spotting it.)

This is the problem with all grafted plants: there is always the possibility of the rootstock sneakily sending out some energetic shoots, instead of merely supporting the upper growth. I suppose you can't really blame them: after all, the rootstock is doing all the hard work, while the "posh" upper part gets all the credit.

So they take revenge by attempting a coup, whenever we are not looking.

This is why grafted plants - many ornamental trees, most standard Roses, plus many others - require constant vigilance. Well, maybe not "constant" vigilance, but they do require regular checking, in order to catch these little blighters while they are still small enough to be removed easily.

In a perfect world, the keen-eyed Garden Owner (or their Gardener) would spot the emerging shoot while it is tiny, and would rub off the buds before they wasted energy in growing. If you've never had to do this before, be reassured, "rubbing off the buds" is exactly what it sounds like, you just rub the bud with a gloved finger or thumb, knocking it off the stem, and preventing it from growing. It does very little damage to the stem, and it usually prevents that particular bud from re-growing.

If you miss the bud stage, and don't catch it until you have an actual shoot (as we have, above) then it's less easy: if the shoots are still fairly small, you can often "pull" them off. Again, as the name suggests, that means pulling the shoot away from the stem. If the shoot is small and still very soft and tender, it comes away easily in your hand, and all is well. But if it's had time to develop some rigidity and strength, then there is a real risk that you will rip the bark of the main stem, or the root from which is it springing, by pulling off the shoot: so you usually end up cutting them off, for safety.

The bad point about cutting off such shoots is that cutting them is, in effect, no more than pruning them: and pruning makes things grow. Yes, they WILL regrow. Often, by cutting off a shoot, you will find that you get two, three, or more new buds popping up on the fresh cut, rather in the style of the Hydra: cut one head off, and seven more spring up.

However, sometimes you don't have a choice: if the shoot is too large to rub off or pull off, then you will have to cut it, and that means you will have to watch it carefully over the following few weeks, for signs of regrowth: and this time, you can catch the buds nice and early, rub them off, and hopefully they won't keep on coming back.

In my case, above, those tiny little shoots were sprouting from an inch or more below the surface, and were quite stiff and strong, so I had to scrabble around underground until I found where they joined the main stem, then cut them off as close to that stem as I could manage.

And yes, now I will be keeping an even sharper look-out, for them to reappear!