I wrote, a short while ago, about compost: well, to be honest, I'm always writing about compost! I am quite obsessed on the subject, as any good gardener is.

I made a comment about how delightful ("not") it is to be asked to sort out failed compost heaps, and how sometimes it's a stinky slimy mess, but how more often, it's bone dry and rock hard.

Here's a case in point, from some years back: this Client had a set of three large compost pens, which ought to have been perfect. 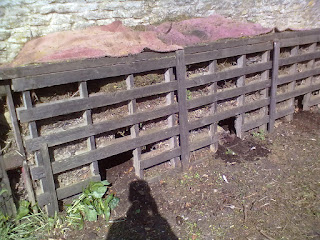 I wanted some compost to spread on her beds, and was told that there was plenty of it, look - three whole pens full of it!

My first reaction was "oh no, they have carpet on top".

My second reaction was "oh blimey, all three pens are equally full."

And of course my third reaction was a sinking feeling, because I knew what I was about to find.

To explain: first reaction - oh no, carpet. Why? Compost heaps do not need carpet on top. This is an old allotment-holder's practice, and I still don't know why. The theory is that the carpet keeps the heat in, thus helping the heap to rot, and - more to the point - to get hot enough to kill weed seeds. But in real life, far more compost heaps fail for being too dry, than for being too wet, so in my opinion, putting carpet on top is not only a waste of time, but it often causes the heap to fail altogether.

Plus, in summer, you often find harmless grass snakes lurking underneath the carpet: it's dry, warm, and often has rats and other small rodents living there, thus creating perfect living conditions for snakes. Now, I don't mind snakes as such, but I'd rather have good compost in my pens, than snakes.

Second reaction - all three pens are full.  This is very bad. The "correct" way to make compost - and I put that in quotes because in gardening, there are no hard and fast rules, there is no right or wrong, there are just many, many ways to do things.... anyway, my own personal "correct" way is to have three pens.

One of these is the Active one: the one which you are filling now, the one with all the green stuff in it.

The second one is the Resting one: the one which was most recently filled, has now been retired, and is being allowed to slowly sink down, and turn into compost quietly and without interruption.

The third one is the Ready one: the one with the good compost in it, which we are gradually emptying and using on the garden.

So at any one time, the three pens should all be at different levels. Not all the same.... and one of them should be full of green stuff, one should be brown on top, and the last one should be nearly empty!

Third reaction: yes, it was all going to be bone dry and rock hard, wasn't it? And it was.

What they had done? They had filled all three pens at the same time, instead of doing them in rotation, and when they wanted some compost, they started opening the little doors at the bottom and scraping out some of the good stuff. Seems like a good idea, doesn't it? It's the same principle as those black plastic "daleks" which I hate so much.

But it doesn't work, it just leaves you with a "cave" at the bottom, which then goes rock hard: no more material falls down, so you can't get any more out, and the whole heap is now bone dry at the bottom, bone dry on top, no worm activity, and no more compost.

And in order to fix this problem, and get the composting starting again, I had to - all together now! - empty out all three of the wretched pens, which was a back-breaking job, in the hot summer heat, bearing in mind that I could only do it in instalments, because I had the rest of the garden to attend to, as well.

Having heaved everything out, I was able to extract a small amount of semi-reasonable compost - not much, but every little helps - and as for the rest, it was thick layers of rock-hard semi-rotted, compressed dry stuff. A bit like chipboard.

I broke it up into smaller chunks, heaped it neatly to one side, and started the process of composting from scratch: I shovelled a layer of it into the pen now designated as the Active pen, watered it well until it was soft and soggy, then started adding fresh garden waste to it.

Each week when I was there, I would add another layer of the bone-dry stuff, water it until it was soggy (yes, I could have watered the entire "dry" heap, but then it would have been heavy to lift: I'm not daft!), then pile on that week's weeds and garden waste. After a while, all the dry stuff had been layered in with the fresh material, the Active pen was full of worms and working nicely, and at last we had a compost system going again.

This entire sequence took me several weeks, and was extremely hard work: but at least that's one Garden Owner who is now happy that their compost pens are finally working properly!