Moving house? How to take your best plants with you.

Non-gardeners would never even consider this to be a problem... but what do you, if you love your garden, but you have to move house. Can you take the garden with you? Or, can you at least take your favourite plants?

There are two elements to this question - horticulturally, and legally.

Let's start with "legally". Properly speaking, the buyer is buying the house and the garden, as seen. So if you plan to take plants with you, you need to ensure that the agents, and the buyers, know that certain plants are not included in the house sale.

It's fairly easy, obvious, and acceptable, to point out that all plants in pots will be moving with you, but it gets a bit more awkward if you intend to take plants which are growing, or which appear to be growing, in the ground.

I say "appear to be", because I have a lot of small trees in pots which are "plunged" into the ground, specifically to stop them from rooting, and make them easier to lift, because I fully intend to take them with me, when I move. This means that I will have to point this out to the agents.

It is sad, but true, that most people - non-gardeners - won't even "see" most of your garden, they'll just get an impression of greenery, leaves, colours, etc. So they won't care if you take a few plants with you. And it's quite easy to work out what sort of people they are - if they look round your house, then when shown the garden, burst into excited skips of joy, crying "Oh look, a Liriodendron!" and rush round taking photos of everything, then you will have to be quite specific, if you are intending to dig it up and take it with you.

But if they just look outside, and say "hmm, oh yes, very nice," then you can probably get away with nabbing a few prize specimens, as long as you don't strip the place. And make sure the garden is "tidy" afterwards: if they can't see any obvious holes in the planting, they might not even realise that you have removed your favourites.

So that's the legality of it: what about the practicalities? Well, that divides into Prep, Decisions, Just Beforehand, and Packing.

Well, first and most obvious, "Pot them up". Dig up your precious ones, pot them up, well in advance of the move. This serves a double function: firstly, plants in pots are not "part of" the garden, and secondly, if they are going to die, then they might as well die before you have gone to the trouble of moving them.

Secondly, "Take cuttings, take seed". Again, well in advance of the move: get some clones established, get a stock of seeds, labelled and packed up neatly.

Thirdly, "Impose upon your friends". Consider moving some of your plants into someone else's garden for a few months... of course, you might not get them back, but it can be a useful back-up.

It's a good opportunity to divide big, old, perennials, especially grasses etc, to refresh them: so pot up a couple of good strong sections for yourself, put back a decent section into your garden, and maybe give a couple of leftover section away to friend and relatives - again, as a back-up.

What to take? What to leave?

Do a garden plan of the new place, and work out where you are going to put everything. This might make you realise that you don't have room for all of it... in which case, don't take it with you!

Moving house is a great time to declutter, and that includes the garden. Clear out all those old pots, un-used tools, and "stuff" in the shed, and see if you can recycle or re-home anything which you are not going to need in the new place.

This includes plants - if you have pots containing plants which are straggly, scruffy, half-dead, and which generally do not bring you joy (Marie Kondo strikes again!) , then get rid of them: throw away the plants, and then assess the pots: are they good enough to come to the next garden? Or are they the wrong size, the wrong shape, the wrong colour, or damaged: in which case, bin them, or pass them on.

Having decluttered the shed and the garage (and the outhouse, and the porch, and the under-stairs cupboard, and the meter cupboard, and the lean-to, and the conservatory if you have one....). the take a look at the actual plants.  When it comes to plants growing in your garden, grafted plants are the worst to move, because damaging the roots - and it's inevitable that there will be some damage - will prompt them to send out new suckers and shoots.

Climbers are also very difficult to move, not least because it means chopping down nearly all of their upper growth. The shock might be more than they can bear. Again, ask yourself if you really, really need that particular climber: can you easily buy a replacement? If not - if, for instance, you love it, but you don't know the name of the exact cultivar - then give it a go, but if they are available everywhere, well, maybe it's better to start with a new one?

Alan Titchmarsh said once, "why do this? Part of the fun of moving to a new garden is to try new things, so why re-create your old garden?"

He's right, as usual, in many ways: the soil and the microclimate are likely to be quite different in the new place, so your old plants might not grow exactly as they used to - they might be smaller, they might even be much bigger!  But if you have sentimental plants, or plants which are not easy to find for sale - and it's well worth checking this out - then I think you are perfectly right, to take them with you.

When the time comes, once you have a moving date, find a friend or relative who will let you move a load of things in pots round to their garden for a few weeks, so that you are not trying to do it all on one day.

Obviously you'll ask them to water your pots for you, having shown them how to do it properly, and having thanked them effusively, in advance, for their time and care.

Then, once you've moved house and are ready to collect them, ask the friends to stop watering, a few days beforehand, to make them a little lighter to move, and a lot less messy.

To load up the pots, if it's mid-season and they are fulsome and fluffy, consider a bit of judicious pruning, to make them more manageable: and tie up shrubs or spreaders with twine, to make a neater package. If at all possible, get them all to be upright, and not spreading much beyond the size of the pot - which won't be possible for small trees etc, but might work with most of your shrubs.

Pack them into the van, little ones first - counter-intuitively - and push them right to the very front of the van, hard up against the front panel. Braking will fling the pots forwards, so don't give them any room to slide. If your pots are terracotta or ceramic, wrap them in bubble wrap, or wedge slices of cardboard between them, and push them firmly up against each other. This way, they won't be able to fall over, and if they are already touching - albeit buffered - then they won't be able to clash together.

If you are moving in winter, when herbaceous plants have died down, you might be able to stack the pots two or even three layers deep.

If you have anything spiky - Yucca, Berberis, or god help you, Monkey Puzzle - tie their fronds up first, then wrap them in a couple of layers of brown paper. 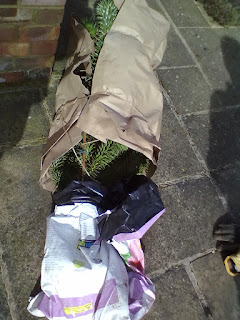 Here's a Monkey Puzzle tree, left, which I had to move a few years ago: having dug it up, the branches were gently raised and tied, then on went the brown paper.

And by tying up the fronds first, you also reduce the overall size of the plant, which makes it easier to pack them into the van.

Put the biggest, heaviest ones in last - yes, counter-intuitive, but it means it's easier to load and unload them, because they are right by the doors: and the heavy ones are least likely to fall over. Unless they are very tall and a bit top-heavy - but tall ones should be along the sides of the van, anyway.

At this point, it's tempting to say "drive the van carefully and slowly" but let's be realistic, you - or your van driver - will be driving exactly as they normally do, ie keeping up with the traffic flow, and braking hard if necessary. Of course, the driver will be aware of their load, and will try to avoid heavy braking and hard cornering, but you can't expect anyone to crawl along at 10 mph just because they have plants in the back. So pack them well: lots of cardboard or bubble-wrap between the pots, and wedge them in as tightly as you can.

As an aside, I now have a lovely mental image of a van full of bubble-wrapped pots, slamming on the brakes, to an accompanying sound track of "Swish! Swish! Pop-pop-pop-pop-pop..."

Once you get them "home": unload the van, cart them into their new home, and water them well.

Assess for damage: anything which got badly crushed or smashed - that's plants, and pots - might need to be binned, but hopefully most of them will have survived. Untie the ones you had to straight-jacket, and let everything settle down for a few days.

And then you can start the job of planting up your new garden!

Did you enjoy this article? Did you find it useful? Would you like me to answer your own, personal, gardening question? Become a Patron - just click here - and support me! Or use the Donate button for a one-off donation. If just 10% of my visitors gave me a pound a month, I'd be able to spend a lot more time answering all the questions!!
Posted by Rachel the Gardener at 08:38