Is it possible to clone a Weeping Pear tree, for sentimental reasons?

I had a question appear on an earlier post about pruning a Weeping Pear tree, and the answer was a bit too long to fit into the comments box.  This is what they wanted to know:

"I have a weeping silver pear in my garden which was planted by the previous owner on the birth of his child.

The tree is well established and therefore he did not want to risk killing it by transporting it. Would it be possible to clone the tree so that I could pass a tree on to his daughter?

Would this need to be done by a professional or is it something I could do? "

Unfortunately, it's also a rather tricky one: the tree was probably grafted, so although you could take cuttings from the weeping branches easily enough - well, moderately easily - they won't look like the parent plant: they won't have that upright central trunk and then the waterfall of branches. 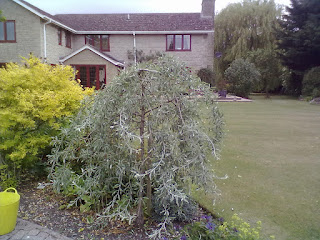 If, by the way,  you are reading this, and wondering what we are talking about, Weeping Pear -  Pyrus salicifolia 'Pendula' - is a (usually) grafted tree, with a central upright stem or trunk, supporting a crown of beautifully pendulous branches, all covered in silvery-grey narrow foliage.

On a good year, they even have pears!! Not edible ones, unfortunately...

This one - left - is a small one, grafted at about head height. As you can see, the branches grow like a waterfall, downwards.

As they don't know that they've been grafted onto a small trunk, they continue to grow and grow, so they have to be pruned regularly, and carefully, otherwise they drag on the ground.

They can also be a lot taller than this small one: another Client of mine has one that must be 15' tall, at least. Quite spectacular!

I don't know how big the one in question is: if it's smaller than the one in the picture above, then it might be worth having a go at digging it up - but if it's any larger, then sadly the original owner is right, digging it up will probably kill it.

So, how would we go about cloning it?

In a nutshell - and this is a somewhat simplified version - you would take several cuttings, which means cutting off a few of the smaller branches, and putting them into pots of compost. Wait several months to see if they "take", ie if they start growing.

If you get a cutting which grows, then hooray! You have cloned the tree.

However, it doesn't end there: it takes several years and a fair amount of skill to create a weeping standard... to get the weeping shape, you need to encourage your cutting to grow straight and tall, by tying it to a sturdy upright support. Prune off any side-shoots, so that you only have the one, upright, shoot.

When it reaches the height which you want it to be, you can allow it to make side-shoots just above that point: if it shows no inclination to produce them, you can simply prune off the very tip, which will encourage it to produce a cluster of side shoots, which will become your weeping canopy.

As you can imagine, this can take several years, especially if you want it to be fairly tall.

And that's the reason why the ones you buy are usually grafted: it's much quicker to grow on a load of non-weeping pears, then chop their tops off, and graft on some branches from a weeping variety. But it still takes several years, and that's why grafted trees are expensive to buy.

So the options are, 1) take some cuttings, and grow it on: which may take years, and it might never look quite as nice as the grafted original.  2) buy them a replacement tree - I know, it's not really the same, is it? or 3) attempt to dig up the tree, pot it up into the biggest pot you can find, water and nurture it, and wait until next spring. If it survives, give it to them, with a huge flourish!

The original question included another question, which was  "Would this need to be done by a professional or is it something I could do?"

As you can see from the above description, it's not rocket science: so it is something which anyone could do... but it is true that a professional would have a much better chance of ending up with something approximating the original tree. They would know how many cuttings to take (lots), how to prepare and nurture them, they would be familiar with the training regime, etc.

The problem is, as this is a long-term project, it would probably cost you a lot more to hire a professional, than it would to just go out and buy a replacement. And what if they invested three or more years in your clones, and then there had been a bad fall of snow and they'd all died... would you still pay them? Would they fob you off with a non-cloned replacement?

Maybe it would be better to invite the daughter to come round, and get someone who is good at photography to take some portraits of her, with the tree. That way, she'll have a memento, and you won't have to risk killing the tree by digging it up.

But whatever you choose to do, it's still a lovely thought!

Did you enjoy this article? Did you find it useful? Would you like me to answer your own, personal, gardening question? Become a Patron - just click here - and support me! Or use the Donate button for a one-off donation. If just 10% of my visitors gave me a pound a month, I'd be able to spend a lot more time answering all the questions!!
Posted by Rachel the Gardener at 07:41