This is very much going to be Part I of the saga...

There are certain trees which pop up in all our gardens.... Ash, Sycamore, Hawthorn, Hazel, and Norway Maple, for a start. Almost everywhere.

Slightly less widespread - or, should I say, more localised - would include Walnut, Lime, Laburnum, and Oak. If your garden, or that of your neighbours, has one of those trees, then you are probably weeding them out all the time. Oh, and I should add Yew to that list: a good Yew hedge in one garden will generate cute little Yew seedlings for a fair distance to either side.

I'm sure that, wherever you are in the country, you could add a couple of trees to that list.

Now, trees are wonderful things, but we don't usually want them in the garden 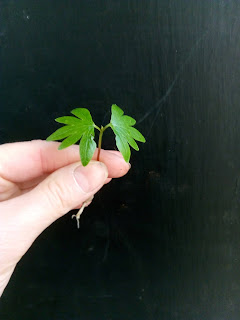 Normally, as a professional gardener, I spot them early, and weed them out while they are tiny.

This delicate, pretty little thing - left - would, if left unweeded, turn into a Lime tree.

And that's all part and parcel of being a professional: it's being able to spot the weeds among the "proper" plants, being able to recognise them at their early stages of development.

Something this tiny is easy peasy to weed: just take hold and pull gently, and out it comes.

And if you pull not-very-gently, and it snaps off, well, you're pretty much guaranteed to have killed it, so that's not a problem any more.

Ash seedlings are easy enough to recognise, as they exhibit the classic compound leaves very early on, when they are still small enough to pull out, easily and quickly. Once you have seen a few hundred of them, you learn to spot them before they have even produced the first set of "proper" leaves: 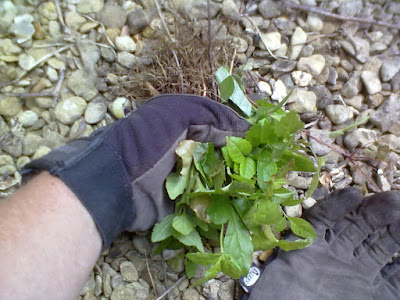 Here's a handful I pulled out, recently - it does make you wonder why the UK inadvertently set in motion the wholesale slaughter of our Ash trees, by importing disease-ridden ones from Europe... when they grow so easily, and are weeded out in such huge quantities....

But enough of that, back to the plot: if you miss an Ash seedling, it quickly grows into an Ash sapling, and that's a lot harder to deal with, as they produce an initial long, strong taproot, which is, as we gardeners say, "a bugger" to dig out.

There is a whole sub-set of lazy gardeners out there, who don't bother to dig out the saplings, and instead they just cut them off at ground level, or as close as they can, and hope that no-one will notice. Alas, Ash will regrow from this treatment, as will Sycamore, Hazel, and Hawthorn, and probably most of the others, as well.  Instead of having a sapling, you then find, a year or two later, a thicket of the stuff, springing multi-stemmed from the cut-off stub.

Then there's the situation where the invader cunningly positions itself right by something with very similar leaves, so that it goes un-noticed.

This is what happened in the garden of a friend of mine: she has a lovely Wisteria, growing up some battered old trellis, and when I was there last week, I spotted the Ash tree which was taller than I was, by a fair amount. It had sneakily grown right up high, inside the cover of the similarly-leaved Wisteria.

It was far too big to dig out, not to mention that it was hemmed in on one side by a patio, and on the other by the base of the trellis fencing, so all I could do was cut it off as low down as I could, just like one of those not-very-good gardeners which I mentioned above. 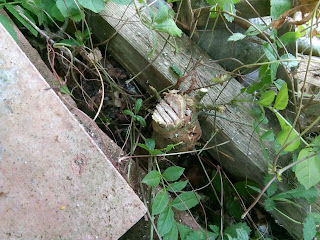 My first suggestion was to wait until it had sprouted a few new leaves - which, of course, it will - and then spritz them with weedkiller: nice fresh, young, leaves are very good at absorbing the chemicals, so it should be successful.

But, alas, my friend does not allow the use of weedkillers in her garden (which explains the amount of bindweed, cinquefoil etc, but who am I to criticise?) (*laughs*), so I had to come up with another plan.

As you can see from this photo, I took a leaf out of the arborists' book, if you'll pardon the expression, and sawed a few vertical cuts in the stump, in the hopes that water would get inside the stump, and rot it.

I will keep an eye on it, over the next few months, and we'll see what happens!