How to... get your geraniums under control in late summer

OK folks, I admit it: when I type Geraniums with an s, I want to type Gerania.  Does anyone else feel that urge? Or is it just me?

OK, well, there comes a point in late summer, when the Geranium have flowered their socks off for weeks and weeks, but now they are starting to look a bit of a wreck.

This week, a Client asked me to apply the Firm Hand to the geraniumsss around her small pond, because they were smothering it: 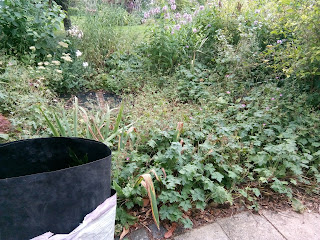 Yes,, there is a pond in there, somewhere. 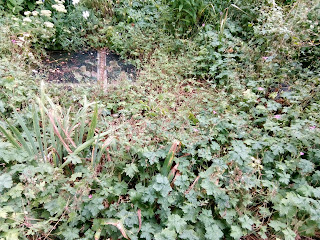 By standing closer, and leaning over, you can just about see the water!

Most of this mess is straggly, over-grown geranium, which have finished flowering, and are just flopping about all over the place.

They are also smothering the Bearded Iris at the front: and this is bad news, because Bearded Iris need the sun on their above-ground rhizomes - the  phrase in all the gardening books is "to bake the rhizomes" in order to promote good flowering the following year.

Answer, we grab our trusty secateurs, and start to cut back the lanky growth.

This is always a super-scary thing to do, because in order to do it properly, you have to absolutely scalp the existing plants: one of my elderly Clients had a lovely expression for it, she used to tell me to cut them back "to the bone". That means, to cut off everything. Lanky flowered stems, floppy leaf stems, even the cute little new leaves. Chop the lot. Be brutal.

Well, you could spend all day carefully tracing back the flowered stems one by one, and cutting them off, close to the base of the plant. This would preserve any newer leaves, and wouldn't leave the bed looking bare and ugly. But, by cutting back really hard, you promote the plant into making a flush of lovely fresh new growth.

And, if you were to carefully cut out the long stems and leave a fair amount of leaves, you would find that a) they would be lank and floppy, because they have grown up through the mat of older growth, and without it, they are not strong enough to stand upright: and b) within a week or two, they will be "old" leaves and will spoil the look of all the fresh new ones.

It's also massively faster to just grab the lot, and chop! 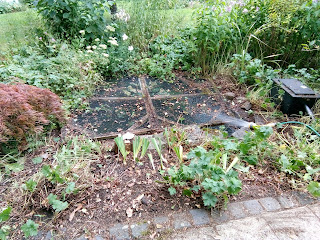 Here we are, half-way through the job: the Bearded Iris have been revealed, and are now blinking in the light.

Geraniums usually start off in fairly neat clumps, so it's a case of tracing back the long floppy stems until you find the base unit, as it were, then cutting them off as close as you can.

You will probably find that they are also spreading themselves out, so this is a good time to check for any expansion into unwanted areas, and if you find some which are heading off the wrong way, just pull them out, or cut them off.

In this case, there were a whole mass which had managed to root themselves around the edge of the wire mesh anti-heron frame, where it sits on the stone edging: so they all had to be carefully pulled out.

There were also a large number of geranium which were rooting themselves in and amongst the Bearded Iris, which we certainly don't want, so out they came.

And here's the "final" version - I put that in quotes, because in gardening, nothing is every final, and there was some additional shrub-tidying and general weeding to be done, as well. 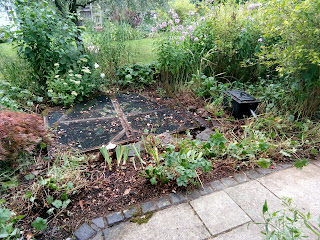 But this is the general effect: Geranium cut right back, Bearded Iris rescued, and their foliage trimmed back to allow the sun to reach them all: the path, now that we can see the edge of it properly, has been swept of debris, and the pond had been topped up with water.

I also watered all the cut-back edges, because that will encourage the Geranium to produce that flush of new leaves as quickly as possible, so they don't look bare and scraggy for too long.

Did you enjoy this article? Did you find it useful? Would you like me to answer your own, personal, gardening question? Become a Patron - just click here - and support me! Or use the Donate button for a one-off donation. If just 10% of my visitors gave me a pound a month, I'd be able to spend a lot more time answering all the questions!!
Posted by Rachel the Gardener at 10:36