Wrapping the Camellia up for the winter

I've written about wrapping up the Hydrangeas (and the Fig-inna-Pot) to protect them from frost, any number of times - just type the word "wrapping" into the Search box, which is at the top left of your screen,  to read all about it.

But this week, it was time to wrap up the Camellia again, and as my Trainee wasn't with me that day, I took some photos of the process, and thought I'd share them with you.

Firstly, why are we wrapping it?

It's a Camellia, which is not exactly tender and delicate, but it's in a pot, so it's a bit stressed all the time anyway;  it's positioned in a highly visible, rather windy spot; and it comes into flower very early in the year, which means that it has great big fat flower buds already formed, and there is a good chance that frost would ruin them, which would mean no flowers next year. 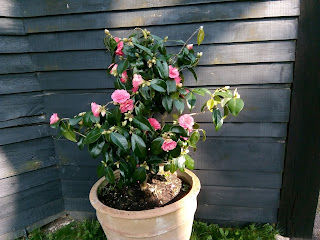 As you can see, a substantial pot, and a fairly large plant, which is nicely proportional to the pot.

I don't plan to let it get much bigger, but it makes a nice feature against the black-painted buildings.

I'm less than thrilled with the rather scrubby grass underneath it, though: after discussions with the Client, we've agreed that next year, we'll lift all the turf and turn this small area over to shingle.

It's awkward to mow, not least because it has lots of edges where the mower can't reach: so it never looks really nice. And as it is in, as I said above, a highly visible spot - well, it would be better all round for it to be shingle, instead of grass.

I also think the shingle would make a good colour contrast with the black woodwork, and will also reflect heat up. All good!

But for this week,  it's more important to get it safely wrapped up. We've already had one sharp frost, earlier this week, even though we're only in November.

So, why are we wrapping it?

To prevent frost damage. To protect those tender buds - next April's flowers - from damage.

What do we use?

Horticultural fleece: it's a man-made product, but it's re-usable, with care, year after year. I don't like using hessian or any cotton-type fabric, because they soak up the water and become really heavy, which often damages the plant underneath.

Likewise, I hate, loathe and detest bubble-wrap for this purpose: anything plastic will hold the water inside, so any winter sun will cause the plant to "sweat", leading to a mass of water on the inside of the plastic. This leads to mould, and all sorts of horrible problems. It also creates a haven for bugs and creepy-crawlies, and while I am all in favour of the wildlife, I don't really want them eating our precious Camellia, over the winter.

So, lightweight horticultural fleece it is: it allows the light through, so the plant doesn't die over the winter: it keeps the frost off, it allows the plant to "breathe", it allows some rain to get in, but it doesn't funnel a lot of rot-inducing dampness into the centre of the plant.

What do we need?

Collect together some stout canes, long enough to be pushed a good distance into the pot, and still be taller than the plant: some ordinary brown string or garden twine: scissors: and some fleece.

Right, before we start, ensure that the surface of the pot is clear of weeds, and that the plant isn't bone dry, for lack of watering. (*laughs*) 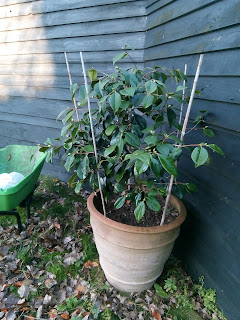 First job - shove in the canes. I have used five, pushing them in along the sides of the pot, so they are angled slightly outwards.

This is perfect, as the top of the plant is wider than the base.

As you can see, my canes are just a wee bit higher than the top of the plant, and are pretty much all the same height. 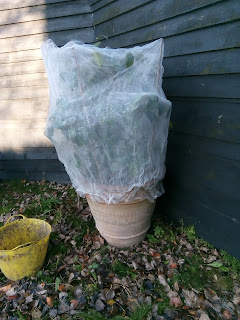 Next:  take the horticultural fleece, and run it around the plant a couple of times, to get a double or triple layer.

How many layers you use will depend on how thick your fleece is: there's no right or wrong, as such, just use enough that it's safely covered, but not so much that you can no longer see the plant through the fleece.

Once you have lapped the plant a couple of times, cut off the fleece, having left enough spare to drape across the top of the plant.

Now run a length of string all around the lip of the pot, just below the brim:  make sure you have caught the bottom edge of the fleece inside the string, and then tie it, fairly tightly.

This ensure that the fleece won't creep upwards and allow the frost in. 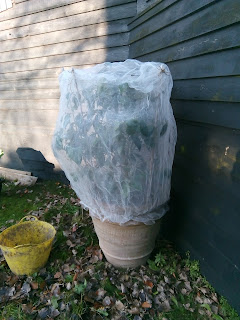 Next, tie the sides of the fleece to the canes.

I do this by taking the fleece over the tops of the canes, then tying it at the very top.

Hmm, hard to explain: I'll take a better photo next week, and come back and add to this article.

Then, once the sides are good and secure, take the top "flap" over the top of the plant (you can just as easily use a separate length of fleece for this), and tie it to the canes.

This ensures that the frost can't "fall inside" the plant and damage it.

Frost is weird stuff, by the way: it can form only at ground level (that would be a ground frost), or it can form in mid air (air frost) as well as on the ground. 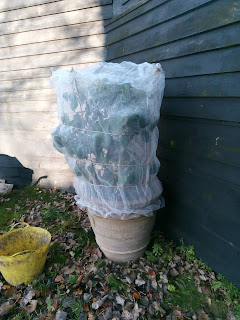 For the purposes of gardening, though, all frost is bad, and we want to keep it away from the surfaces of the plants.

The idea of the fleece wrapping is to cause the frost to form on the outside of the fleece, instead of on the leaves and buds and stems. It's rather like wearing a coat in the rain - the coat gets wet, but you don't.

In a sort-of similar way, the fleece can be rigid with frost, but the plant within will be safe.

Here's the finished thing - right: I have added three horizontal layers of string, to prevent the fleece from "billowing" in the wind, and pulling itself out of the ties.

There we are! Job done! That will stay in place all over the winter, and won't be removed until we are fairly sure that there won't be any more frost - technically that could be as late as May, but usually it's more like late March or April.

In this case, because our Camellia flowers in April, we will unwrap it early in April, so that we can see the flowers. If it were a very delicate plant, we might have to keep an eye on the weather forecast, and re-wrap it overnight, if frost were forecast.

Alas, this one doesn't get the luxury treatment: once it's unwrapped, that's it, it stays unwrapped!