How to improve a border with cunning Cotinus coppicing

Last summer, back in the days when we were allowed to take an afternoon off work, jump in our cars and just drive somewhere... ah, happy days... I was visiting the gardens at Cerney House in the Cotswolds - ever been there? Not far from Cirencester: if you haven't, I recommend it, once it's safe to go garden visiting again.

While there, I was struck by these lovely splashes of deep purple in amongst the herbaceous borders. 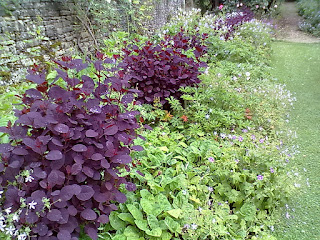 The plant was recognisable enough - a purple-leaved Cotinus coggygria, probably 'Royal Purple', but I was intrigued to know how they had managed to achieve such dense foliage so low to the ground.

Was it a dwarf form? Was it actually a cunning grouping of seven or eight individual young plants in pots, plunged into the border for effect?

No, it was even more clever than either of those - they were perfectly ordinary, well established Cotinus bushes which had been drastically coppiced.

The stumps from which all this greenery ("purple-ery?") sprouted were at least 6" across: substantial trunks, in fact.

One of the gardeners told me that they used to have a row of well established, fairly ordinary Cotinus along the back of the border, but one of them met with a drastic accident and had to be cut down to a short stump of about 2' high. They were so pleased with the resulting low growth that they took a chainsaw to the other ones, and now they do this every year to keep them low-growing and lush.

Coppicing is a great technique to use, not just on shrubs, but on ornamental trees which would otherwise grow too large for their situation: it not only prevents them outgrowing their allotted space, but it forces them to produce much larger leaves than normal, which can be just what the garden designer ordered.

I have a four-year old Liriodendron (Tulip Tree) which I grew from seed, and earlier this year I cut it right down from being a spindly 5' tree to a tiny stump of barely 3", to see what would happen. Sure enough, it sprouted new leaves from the stump and now looks, well, rather cute. I shall be doing the same to my Eucalyptus next spring: it's grown very crooked, so I'll see if I can change it into a low, bushy plant instead.

I've also seen Paulownia (Foxglove Tree) treated as a low pollard, in order to get huge, really impressive leaves, just at the height where you can see them, and feel them, which is a real benefit, as they are lovely and velvety.

In case you can't remember the difference, coppicing is where you cut a main stem down to about ankle height, allowing the plant to re-grow from that low point. Pollarding is the same thing but done much higher up the trunk - usually at head height or (in towns) at lamp-post height.

Originally, coppicing was done to produce large numbers of thin, straight shoots to be used for weaving, constructing fencing or hurdles, or for bundling into faggots for burning: traditional uses, and traditionally used on trees such as Hazel, Willow, and Sweet Chestnut.

Pollarding was done in areas where grazing animals shared the coppicing grounds, to prevent them eating all the new shoots, and the height of the cut was determined by the type of animal - horses have much longer necks than cattle or deer! These days, you are most likely to see pollarded trees in our cities and towns: we are all familiar with large street trees which, every couple of years, are scalped of all their growth, way up there at lamp-post height, leaving a bare, straight trunk, and a bit knobbly bit at the top. Pollarding for grazing giraffes, possibly.

Interestingly, (well, I think so) a tree which is coppiced can have its life expectancy increased drastically: there are documented cases of hazel - which normally manages about 80 years - living for several hundred years when regularly coppiced. Amazing, huh?!