Bramble seedling.... or Raspberry seedling? How to tell the difference

I had a very interesting question the other day, from a lady called June (*waves*) who was struggling to remove brambles, and who said:

"We keep finding new shoots which I dig out, as and when, but I now have shoots of what look like brambles but could also be offshoots of raspberry? They look so similar, how do you tell the difference?"

Not something I had ever thought about before, because to me, they are completely and immediately different. But then, I spend much of my professional life working with these plants, so of course I know the little blighters very well...

Being able to differentiate between these two plants requires an understanding of how they grow:  so let's start with a bit of background information, the relevance of which will be become apparent later on.

Blackberries/brambles (same thing, Rubus fruticosus) spread in three ways: they are a perennial, so the original plant gets bigger and bigger each year: they spread vegetatively, by a process call layering, and by seed. Let's take a quick look at each of those:

1) Perennial growth is easy to recognise, the base of the plant gets more and more congested each year, and you usually find a clump of cut-off brown dead canes.

2) Layering occurs when the tip of  a long whippy shoot touches the ground, whereupon it will produce roots. This creates major trip hazards for your poor gardener, and is the means by which brambles form impenetrable thickets. 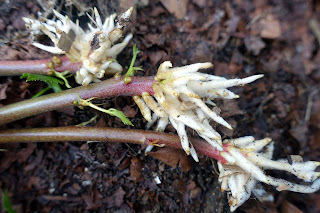 Here's a photo of three bramble tips, which were touching the ground, and which have just started producing a bundle of roots, those white things, at the ends.

These ones have only just started rooting, so they were easy to dig up. Once they get a bit bigger, they become correspondingly harder and harder to get out.

Layering is a useful process for creating additional plants for free, but in this case, it is not what we are looking for - we're aiming for fewer brambles, not more!

3) And finally, seeding: each blackberry, each actual black berry, is - are you ready for some botany? -  an aggregate fruit, made up of lots of little fruits (known as drupelets) all welded together. 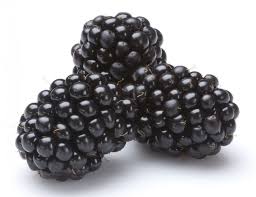 Thus you can understand that one single "blackberry" can lead to, ooh, let's count them - 50 or 60 little seedlings.

Now you can understand why brambles are such a problem: the original plant keeps on coming back each year, the new growth can root itself and leapfrog all round your garden, and every single fruit which you fail to pick, will fall to the ground and produce a whole load of little ones.

Not to mention the little birdies, who will scoff the fruits, fly off, and poop the seeds out wherever they go.

Raspberries - Rubus idaeobatus.  There are many sub-species and cultivars, but let's stick with that name for now. As you can see, also in the genus Rubus, so they do have a lot in common with brambles, and it's hardly surprising that people can find it hard to tell the difference.

They spread mostly in two ways: they are perennials, just like blackberries, so the original plant gets bigger each year: but their main method of replicating is to send up root suckers, often a fair way away from the original plant. They rarely do tip-layering, as their growth habit is much more "short and upright" rather than "yards long, and lax".

Logically, they would also spread by seed: they, too, have an aggregate fruit made up of drupelets, and anyone who has ever eaten raspberry jam knows that it is full of "pips" . Despite this, I have rarely found any raspberry seedlings in the garden - they mostly spread by sucker.

The suckers are little devils for going off exploring: in my own small garden, I've had them popping up yards away from the original plants.  If there are any solid obstacles in your garden, such as patios, paths, slabs etc, they will often creep all the way underneath them, then pop up, yelling "Surprise!" at the far side.

How to tell the difference?

There are two, quite different, types of invaders: tiny little seedlings, and stout shoots.

If, however, it's a shoot that you find - June said "shoots" rather than "seedlings" - then you'll need to take a closer look at it.

Are they attached to the tip of a long, lax stem, all of which is above the ground? It's a bramble.

If you pull them up, do they have a tuft of roots just below the surface? They are a bramble which has tip-layered.

Do they have individual "thorns" on the stem? Look at ground level, in particular.  If yes, it's a bramble.

Do the leaves start appearing at ground level, and continue all the way up the shoot? It's a bramble.

Does the shoot, above ground, flop over sideways? It's a bramble.

On the other hand:

Does the shoot go onwards and downwards into the soil,  with no tuft of roots, in fact, no sign of roots, just a long brown underground stem? It's a raspberry.

Does your shoot join onto a length of brown root, growing sideways through the soil, quite possibly with another shoot a few inches further away? It's a raspberry.

Is there a tuft of bright green foliage at the top of the shoot, looking all fresh and perky, but nothing much on the stem? It's a raspberry.

Is the shoot covered in a dense coat of small bristles, like hairs, but rigid? It's a raspberry.

Is it a bit reddish, the stem? It's a raspberry. (This does not always occur...)

So there you go, a few ways to tell the difference. I did look for photos or illustrations, on the grounds that a picture is worth a thousand words, etc, but I couldn't find any good pictures. I shall endeavour to take some of my own, next year!

But meanwhile, June, hopefully this will help you to work out what your shoots actually are!

Did you enjoy this article? Did you find it useful? Would you like me to answer your own, personal, gardening question? Become a Patron - just click here - and support me! Or use the Donate button for a one-off donation. If just 10% of my visitors gave me a pound a month, I'd be able to spend a lot more time answering all the questions!!
Posted by Rachel the Gardener at 08:53