How big do your parsnips grow? 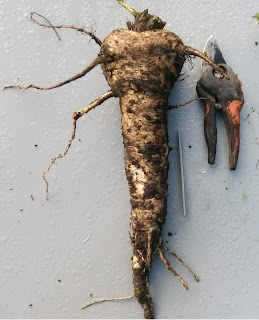 What a whopper, eh?

Note the secateurs for scale... this is a seriously large parsnip.

And it wasn't the only one - I dug up a dozen or more, and at least half of them were in the same general size category as this one, although the other half were very, very short.

I think this might be something to do with this year's newly-constructed no-dig beds, made by laying cardboard over the old lawn grass, then heaping compost on top.

So, some of the parsnips made it to the cardboard barrier and gave up, going for width rather than depth: and some of them clearly managed to poke a way through the cardboard layer, and went on to bigger and greater things, as this one did.

But all of them did it in six months, which shows how well the no-dig vegetable garden can work.

Traditionally, parsnips are left in the ground until after the first frosts, "so that the starch will turn to sugar". Personally, I find that the thinnings, which are lifted very early in the season, are just as tasty, so I am not sure how accurate the whole "leave them for the frost" principle really is.

I sometimes wonder if it's more the fact that parsnips seem to be able to survive being left in the cold damp ground for months, whereas other root veg - carrots, beetroot, for example - get eaten by slugs.

This is, obviously, relating to the days before shops, freezers, and imported unseasonable veg. Back then, it was very difficult to store vegetables, to tide you over the hungry months of winter, when nothing was actively growing, and you'd eaten up the last of the autumn produce.

So parsnips became the "go-to" later winter veg, to be eaten when all else fails. You'll sometimes find them mentioned in reference to the "hungry gap". This is the period in spring, when we've eaten all our stored veg from last year, and - despite the apparently nice warm weather - nothing new is growing yet. Parsnips can tide us over, in that period.

Mind you, with parsnips this big, you'd only want one a week!

Did you enjoy this article? Did you find it useful? Would you like me to answer your own, personal, gardening question? Become a Patron - just click here - and support me! Or use the Donate button for a one-off donation. If just 10% of my visitors gave me a pound a month, I'd be able to spend a lot more time answering all the questions!!
Posted by Rachel the Gardener at 09:34