I received a question the other day: what did I think of these plastic compost bins: 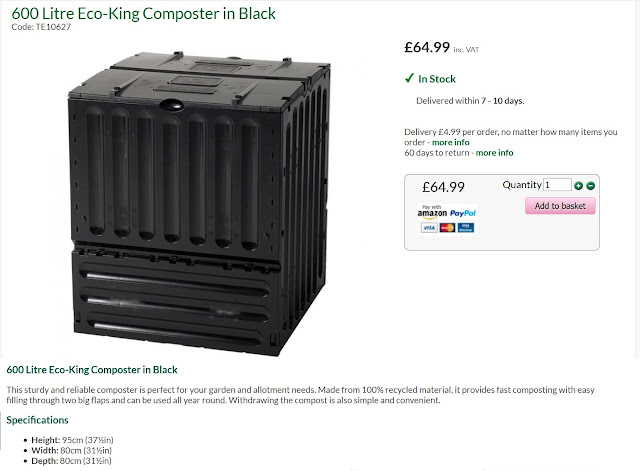 ... did they have any problems, would I recommend them.

In brief, my answers would be "Not a lot, yes lots, and no."

Hmm, that might be considered less than helpful: ok, in brief, then, but not THAT brief:

The concept is a good one: traditional compost pens are made of wood, and over time they rot and fall apart. They tend to take up a lot of space: proper composting requires three pens. They are not pretty: there is usually a degree of mess around them, and after a year or three they usually start to lean or sag.

So what could be nicer than a clean, simple, plastic thing with a lid on top to keep the smell in, and -  here's the clever part - a door at the bottom so that “Withdrawing the compost is also simple and convenient “, as it says in the advert.  Thus, instead of having have a set of three pens cluttering  up the garden, and/or having to walk to the far end of the garden to use them because they are so hideous that you want to have them as far away and as much out of sight as possible... instead of all that, have one neat, compact, easy-clean thing nice and handy for the back door.

And yet I don't like them, and would most certainly not recommend them.


Personally I don't like compost pens with lids, as - in my experience - more compost fails for being too dry than for being too wet. So if one of my Clients bought this system, I'd remove the lids and just use them as open-top pens.

Next we have the doors at the bottom so that "Withdrawing the compost is also simple and convenient" Pff! Load of rubbish! None of the "empty them as you go" systems work, in my experience: trying to pull compost out the bottom gives you half a bucket of almost-useable stuff, and always leaves a hollow cave, which then dries out and goes rock hard. It only works if you take the time to push the hovering top layers well down to the ground. Which is not as easy as it sounds, I assure you. You could, of course, resort to a compost stirrer, but then you can't use the bottom door at all, because stirring the compost (a filthy, tiring, horrible job) means that all the contents are at the same stage of rotting-ness, and this goes against all my composting principles of "letting nature do it properly, quietly, easily, and naturally".

Which means that if those two attributes don't work, why are you paying £65 for the thing, when you could just as well use cheap old bits of unwanted planking, or even old pallets, to make it for very little cost?

Going back to emptying these plastic things,  as the little doors at the  bottom simply don't work,  you will find yourself having to do the old-fashioned hard-labour task of "emptying the compost bin" once a year. This means having to dig everything out through the top opening (messy, hard work, smelly, tiring), put aside the unrotted stuff which is, of course, on top (dirty, messy, smelly), extract the good stuff from the bottom (dirty, tiring, but satisfying) and put it aside (more mess) then tip back the unrotted stuff (very dirty, very smelly, and by now quite exhausting) into the empty bin.

The only way to make this job even moderately easy is to have a plastic bin without a base, so that you can lift the whole thing off the stack of compost, plonk it down next to the stack, then lift the top layers straight into it, revealing the "good stuff" (we  hope) at the bottom.  It's still very tiring, and still very messy. And this sort of thing puts a lot of people off, from making compost at all.

At this point, I always say that if you do it this way, you need enough space for two of the bins anyway,  so you might just as well build two of them - and can you really not find space to squeeze in a third one? Then you can operate the three-pen system which means no digging, no stirring, you just fill them up one at a time, and leave them to get on with rotting as nature intended. No need to add chemicals, no need to stir, no need to faff with them at all. Perfect.

Here is a picture of a set I built in one Client's garden: these are large pens because it's a large garden: 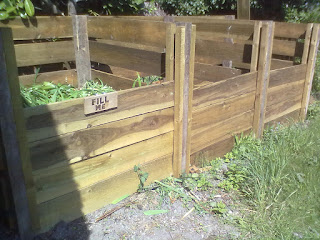 Note the slats at the front, so you can keep it low while you are filling them - easy to get the materials in - and then add more boards as the level rises.

Note the air gaps in the side and back slats: lots of air, lots of drainage.

Note the sign indicating which one we are curently filling, to avoid the HEINOUS CRIME *laughs* of ruining my three-pen system. (To read about the the no-dig, no-stir, easy-peasy three-pen system just check out the book I mentioned earlier!)  This makes it easy for the garden owner to get it right.

Here, at the other end of the scale, are a set of compost pens built with nothing but "found" material, scavenged from various corners of the garden, the shed, and the garage: 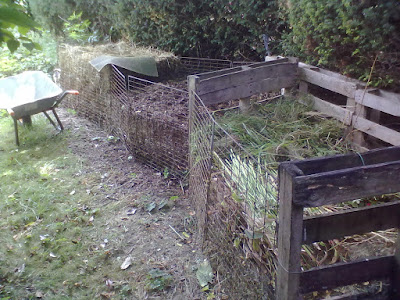 As you can see, I used pallets, metal grids, old wood, wire, anything I could scrounge.

They are less than beautiful.

But they work beautifully!

And - most importantly - neither I, as the gardener, nor the Garden Owner, have to expend any energy at all on them, other than piling the waste material on top of the "Fill Me" pen.

Posted by Rachel the Gardener at 10:32