I saw this stuff for sale in the garden centre, and thought I'd give it a try: 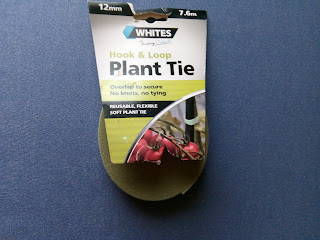 It's basically a long strip of velcro, but the clever part is that the reverse of the strip is "sticky" all the way along.

So you can cut it to any length, which has to be a lot cheaper than buying packs of small lengths.

So where would we use this product, in the garden? 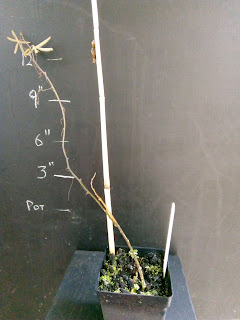 Here's a typical situation - we have a long thin plant, in this case it's actually a seedling of Passiflora cerulea (Passion Flower) and it's grown sufficiently long that it needs to be tied in.

Another situation would be tying in a climber as it grows up a trellis: or tying in a rose to pegs or wires on a wall, for example.

In this example, it's being tied to its own stake in the small pot, but it could be on a trellis or other  plant support. This is just a handy plant on which to demonstrate.

Now, when it comes to tying plants to supports - and this includes climbers, roses, flowering shrubs, almost anything - I have two rules.

The first rule is always to tie the plant to the support, not to force it to twine around the support: unless it's a vigorous clematis!

Why? Stems will thicken up over time, and if your support is fitted quite closely to a wall or fence, the thickening stems will in time become too big for the gap, in which case either the plant, or the support, will break.

It also makes it easier to arrange the stems - in the case of something like a rose, you might want to spread it out evenly, or make a formal fan shape, and it is much easier to train the rather rigid stems if you just tie them where you need them, rather than trying to bend them around sharp corners. 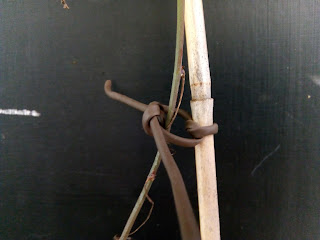 And my second rule is to attach the tie to the support, and only then to attach it to the plant.

This rule has a couple of reasons behind it: firstly, by attaching the tie firmly to the support first, you avoid the tie sliding up or down.

Secondly, it allows the stem to have some room for expansion: here's a good example, left, using my favourite Soft String plant tie.

The benefit of this material is that  it is stretchy, so you can get it really tight around the support.  On a spindly little thing like this,  you can make a small stable loop to allow the stem to grow: and for bigger stems, where the outer loop would be firmly against the stem, it is very easy to undo the knot to slacken it off as the plant grows, without the tie falling off the support, never to be seen again. 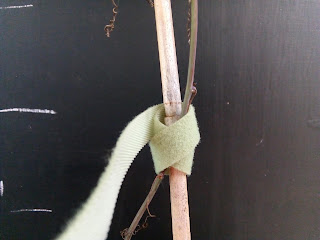 The question today is therefore: would the velcro stuff be easier to use than dear old Soft String?

Firstly - right - is a demonstration of the Wrong Way To Do It.  The tie (in this case, the new velco wrap) has just been wrapped tightly around both support and stem, clamping the two of them together.

Why is this "wrong"?

Firstly, if you strap the plant stem directly onto a harsh solid support - which could be cane, trellis, wire - it will cause damage to the stem as the natural movement of the plant causes it to rub up against the support.

And secondly, it doesn't allow the plant stem room to expand, so the tie will eventually throttle the plant.

This velcro wrap is better in that respect than wire, string, or narrow ties: because it is flat, it is less likely to cut into the growing stem.

However, I couldn't actually get it to be very tight. It was sufficiently loose in that picture, to slide up and down, and swivel roundwards. This is good for the plant stem, I suppose, but every time the wrapped part moves, it will be rubbing the plant stem against the cane, which is not good.

So , how can I get the velcro wrap to be "better" and more useful?

My current Trainee and I spent ten minutes trying to work this one out. 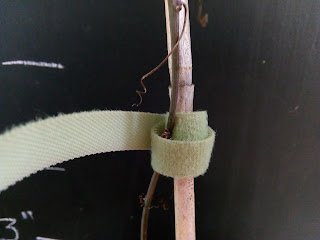 Here's our first attempt: wrap the velcro tightly round the cane, and then loosely round the stem.

Verdict: rubbish, the whole thing kept slipping down the cane as the velcro - having no stretch in it - doesn't sit firmly on the cane. 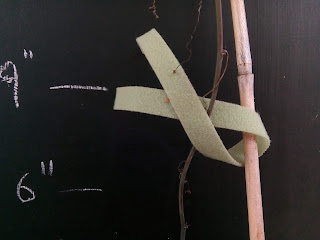 Attempt two: a  loose wrap, trapping the stem in the tie part.

Neither of us liked this one - again, the tie will slide up and down the cane, and we didn't like trapping the stem within the velcro. 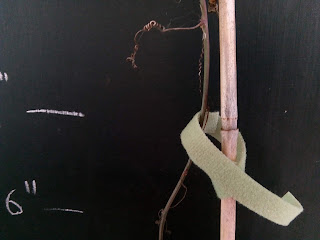 Three: wrap the velcro as tightly as we could around the cane, then at an angle around the stem.

If the velcro wrap isn't "tight" against the cane, it slips up and down, so it's not really giving the support that we want, and there is quite a risk of the stem snapping, or being damaged by the friction.

So on  balance, it's a big Thumbs Down to the velcro-style plant wrap, and I shall be sticking to Soft String!

Posted by Rachel the Gardener at 09:49